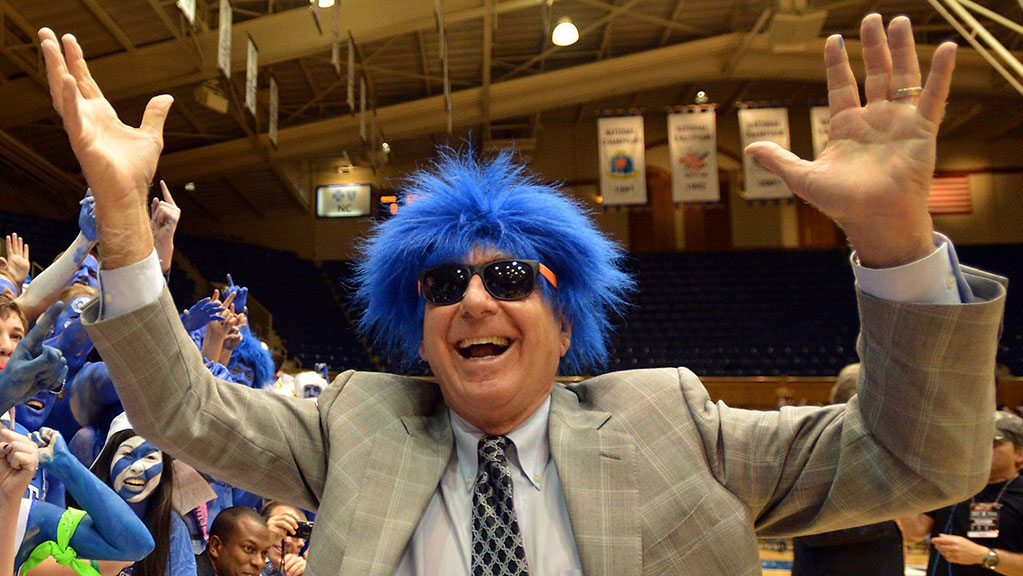 Ahead of Selection Sunday, ESPN analyst Dick Vitale revealed his super-secret, 100 percent cool March Madness playlist to the folks over at Spotify. The good? The list includes Barry Manilow. The bad? The list is only 21 songs long. Ahem, Dickie V, how can this be a “March Madness playlist” when there isn’t one song for every team? I’m disappointed (and upset — probably more upset than disappointed, if we’re being frank). But enough complaining, let’s get to the real story here — breaking down Dickie V’s taste, track by track. Since we haven’t talked to the man himself, we’ll just have to go out on a limb and guess which team matches each song. Without further ado:

1. “Living in Fast Forward,” Kenny Chesney. What team other than Syracuse could the old man have been thinking of when he heard “Livin’ in fast forward / I need to rewind real slow”? The Orange went on a dominant early-season run, notching win after win (25 of them, in fact) before suddenly dropping several games in February and March, including a final, pre–NCAA tournament loss to First Four team North Carolina State. Dickie V clearly wants Syracuse to heed the wise words of Kenny Chesney and just take it slow (especially you, Jim Boeheim).

2. “Coastal,” Kenny Chesney. How do avoiding a cold winter and heading south relate to any of the 68 teams in the tournament? This must be something about a team that got too ahead of itself and needs a quick respite to get back to tip-top shape. Kenny sure has some good advice for these teams! If we’re going with the “jumping the gun” interpretation, well, Michigan State, I do believe that’s you! You got off to a hot start, and people pegged you as the surefire no. 1 team this season — but then the winter storm hit, and boy, did it hit hard. Injuries to your lineup hurt you immensely, and you had to get out of that harsh cold; you managed to make your way over to the less damning Indianapolis, where you came away with three straight wins. Sparty, looks like you’re back — Kenny will be ready for your resurgence in Spokane.

3. “Overjoyed,” Celine Dion and Stevie Wonder. This sweet ballad is the perfect embodiment of Wichita State’s season. The Shockers have pretty much been the story of the season, but still continue to be written off as (relative) non-contenders because of their weak SoS. But hey, “Though the odds say improbable / What do they know? / For in romance / All true love needs is a chance.”

4. “The Power of Love,” Celine Dion. This song is definitely, undeniably Creighton. Has there been a team that has gotten more of that this season than Doug McDermott & Co.?

5. “Dancing on the Ceiling,” Lionel Richie. Florida, yes, yes, yes. The Gator seniors have been to three consecutive Elite Eights — and have lost at three consecutive Elite Eights. This year, they’re seeking vindication. They’re looking to cut down the nets in Arlington and take those suckers home. They’re going to get loose, they’re not going to hold back, and they’re going to dance on the ceiling until everything around them comes crashing down. So somebody turn on the light — we’re going to have a party. (That was a stretch, wasn’t it? Sorry, I just wanted to get that vindication story line in there somewhere.)

6. “Easy,” Lionel Richie. This song (as far as I can tell) is about all the pressure and expectations others place on you. Whom does this mirror? I’m thinking Virginia. The Hoos went into the season ranked no. 24, and then quickly lost their second game before finishing 16-2 in the ACC, with close losses to Duke and Maryland. They captured the regular-season championship over highly touted Duke and Syracuse (and North Carolina), and the ACC tournament championship after a win over the Blue Devils en route to a no. 1 seed in the NCAA tournament. Nobody expected them to be this good. They hear your gripes, your complaining, your malicious remarks, and they really couldn’t give a rat’s ass about them. They’re going out there, swords wielded, Cavalier spirits high; they’re free and they’re easy, like Sunday morning.

7. “Bells of New York City,” Josh Groban. This has to be in reference to a team slotted to the East Region, since that’s played in New York City. “The bells of New York City calling me to stay”? Definitely Villanova. The Wildcats amassed quite the glorious season, dropping only two conference games (both to Creighton) and suffering only one regular-season loss otherwise to Syracuse, before being ignominiously booted from the Big East tournament by Seton Hall. But now that they’ve had a taste of the Big Apple — and quite the sour one at that — they’ll be looking to make their residence in the general vicinity (well, in the state, if not the city) a little more permanent, starting with their first game against Milwaukee in Buffalo.

8. “My Way,” Frank Sinatra. An ode to those First Four teams — or at least those that will be knocked out and not make the round of 64. You all fought valiantly and with spirit, but now the end is near, and there’s nothing left to say except that you faced it all, stood tall, and did it your way.

9. “Fly Me to the Moon,” Frank Sinatra. Another song about love. Since we already used Creighton, I guess we’ll have to go with the cop-out response (although it is accurate): the NCAA tournament itself. For those who live and breathe March, and die with every botched Karl Hess call, and are uplifted with every buzzer-beater after a double overtime — this is for you. NCAA tournament, you are all I long for, all I worship and adore. In other words, I love you.

10. “My Life,” Billy Joel. Definite Arizona parallels here. This is the best Wildcat team we’ve seen in a long while, and who are you to keep pointing out those losses to Cal and Arizona State? And hey, you, stop talking about Brandon Ashley and the Ewing Theory. Let Arizona do what it wants and watch the Wildcats make their run deep in the tournament without your naysaying and negative energy. Ain’t nobody got time for that. Least of all Nick Johnson.

11. “Captain Jack,” Billy Joel. Since there aren’t any key “Jack” players I can think of from this year’s tournament teams, we’ll just have to depart from the book and go with Grinnell’s Jack Taylor. Do you remember him? He scored 109 points on 24 3-pointers back in November. I’m not entirely sure what happened to him or his team, but hey, Captain Jack, kudos to you.

12. “Mandy,” Barry Manilow. Uh-oh, this is about Mandy, who came and gave without taking but was sent away. For some weird reason, Connecticut keeps popping up as the comparison here. It must be Shabazz Napier — giving and giving, and well, next year, I guess he’ll be gone. Sorry Huskies, I see the tears in your mind, and I can’t stop you from shaking.

13. “Can’t Smile Without You,” Barry Manilow. Another sad love song from Mr. Manilow, but of course. This one has to be about a team missing a key player, and the person who comes to mind immediately is Kansas’s Joel Embiid. The center has been out with a back injury and will likely be sidelined for the no. 2 seed’s first NCAA tournament game. Kansas can’t smile without you, Joel. Come back soon.

14. “You’ve Really Got a Hold on Me,” Smokey Robinson & The Miracles. Since we’re analyzing this from Dickie V’s standpoint (or at least trying to), we have to think about teams he loves, or at least the team he seems most biased toward. And of course, the first to come to mind is Duke. But did you know that Dickie V’s favorite team of all time was that undefeated 1976 Indiana team? Now you do.

15. “Cruisin’,” Smokey Robinson. This could be for any team that’s enjoyed cruisin’ with its coach for years. For example: Wisconsin and Bo Ryan, or VCU and Shaka Smart, or New Mexico and Steve Alford (just kidding!).

16. “Walk Like a Man,” Frankie Valli & The Four Seasons. All right, New Mexico, this one’s for you. Steve Alford ditched you last year for the sunny and mild atmosphere of Westwood. But you don’t need him. You finished 15-3, won the Mountain West title after a win over San Diego State, and you grabbed a no. 7 seed. Walk like a man, fast as you can, and forget about ol’ Steve.

17. “Let’s Hang On,” Frankie Valli & The Four Seasons. Louisville, you might have been slighted by the NCAA tournament selection committee and got a seeding lower than you deserved, but don’t let it go, hang on to what you’ve got — which is an easy path to the Sweet 16, a three-loss season, and four players who have achieved national name recognition.

18. “Radio,” Darius Rucker. This goes out to all those teams that are coming in without heavy pressure or expectations and are just here for the ride. So, shout-out to Tulsa, Damian Lillard’s alma mater Weber State, Wofford, Eastern Kentucky, and the rest of you pesky low seeds.

19. “Come Back Song,” Darius Rucker. The following is a note from Oklahoma State fans everywhere: Whoops, my bad, Marcus Smart. We messed up. We did you wrong, and we need you. We wanted you back for another year, we saw your draft stock drop, we saw you get into a spat with a fan who had some not-so-kind words to say, and we saw you get beat up in the media. But we need you, Mr. Smart.

20. “Ain’t Too Proud to Beg,” The Temptations. The following is a note from Kansas and Duke and Kentucky and Indiana: Andrew Wiggins, Joel Embiid, Jabari Parker, Rodney Hood, Julius Randle, and Noah Vonleh, please don’t leave us. We ain’t too proud to beg.

Adam Silver, College Basketball, and Two Problems With One Solution