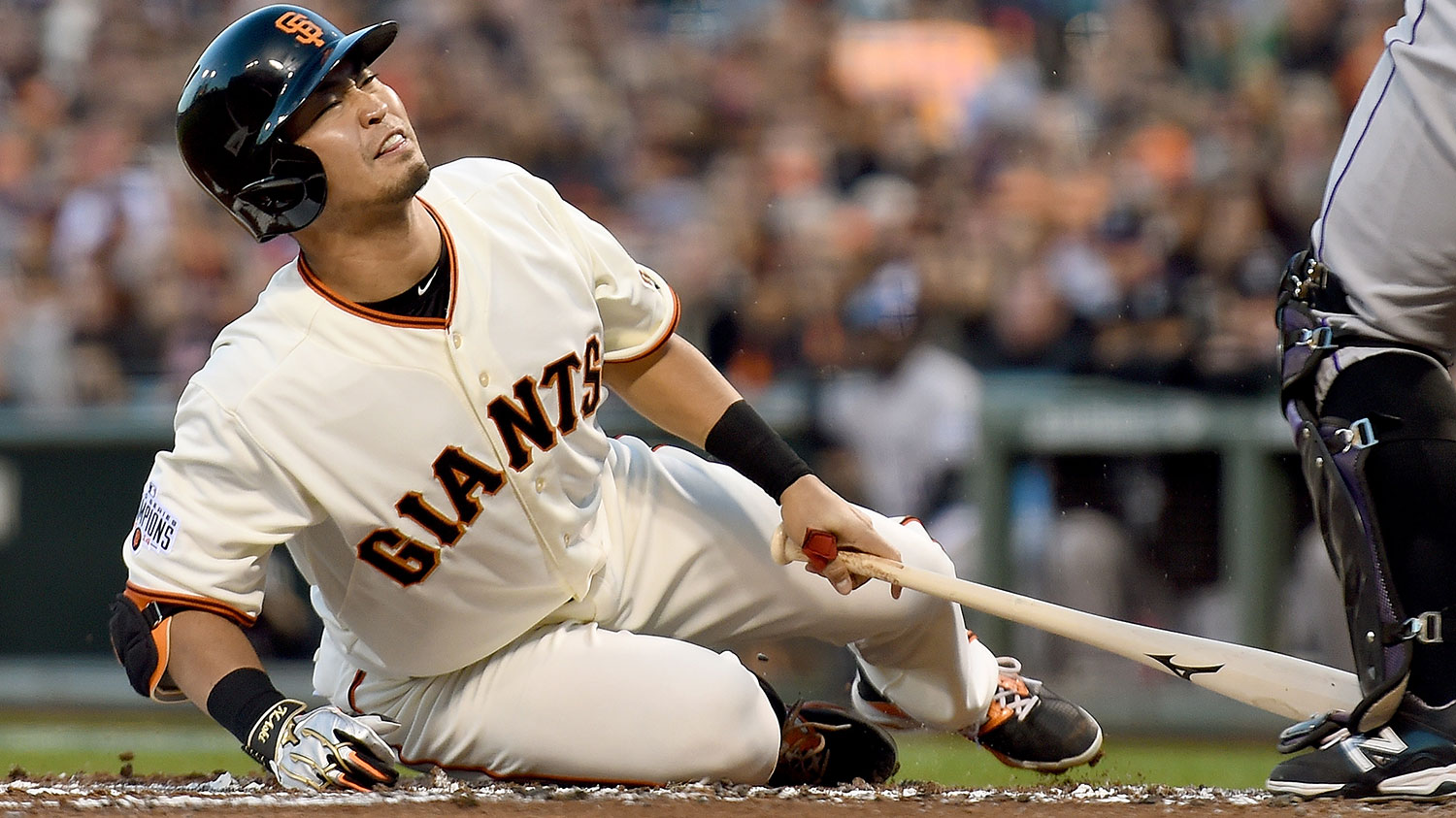 The San Francisco Giants have lost seven games in a row. A meager offense, ranking 27th in the majors in runs per game, coupled with Madison Bumgarner’s sudden mortality, has seen the defending champs stumble out of the gates and fall face-first into last place in the NL West, with a 3-8 record.

World Series winners are often subject to all kinds of year-after pitfalls, and Giants fans know this better than anyone. They’ve embraced the #EvenYear meme, and the most superstitious of them must be tempted to just write off 2015 and start planning the 2016 parade.

Yet, we’re talking about 11 games. Despite some exciting advancements in granular analysis and the potential for small samples to better inform what we’re seeing on the field, we still have to be careful not to draw any grand conclusions from less than two weeks’ worth of action. The “Small Sample Size Song” needs to be playing on a loop until at least the end of April.

Still, there is a middle ground here. We can break down San Francisco’s slow start and suss out several aberrant numbers that figure to eventually regulate. And we can also revisit some of those potential post–World Series traps to see if this year’s Giants might be in danger of falling into them.

San Francisco’s lack of runs is mainly a case of bad luck over a small number of games, and we can drill down even further to see how much the Giants’ lack of production in high-impact offensive spots has hurt them. So far this year, according to Ed Feng’s cluster luck statistic, the Giants have been unable to string hits together, and it’s cost them nine runs compared with what would’ve happened if they’d had even average luck. That’s the second-worst mark for any team in baseball.

When a team isn’t piecing hits together to mount big rallies, the other way to score is by hitting the ball out of the ballpark. In San Francisco, though, that hasn’t happened either. The Giants have tallied only seven homers in 2015, tying for 20th in baseball.

Part of that power outage can be blamed on park factors: Eight of San Francisco’s first 11 games have been played at AT&T Park and in San Diego’s Petco Park, the 30th- and 24th-most homer-friendly stadiums, respectively, in baseball last year. At the same time, seven of those first 11 games came against the Diamondbacks and Rockies pitching staffs, two highly suspect groups that respectively ranked 19th and 30th in park-adjusted, fielding-independent pitching last year, in addition to allowing the sixth-most and first-most homers per nine innings. Scoring only three runs at home over the course of a sweep at the hands of Colorado might prove to be the low point of the defending champs’ season.

However, while the clutch numbers should revert back to normal, the lack of homers might be here to stay. This offseason, the Giants didn’t stand pat with their lineup the way some other defending champs mistakenly have. Possibly still scarred from the multiyear deal they gave a 33-year-old Aubrey Huff after the 2010 title, San Francisco bid good-bye to two key playoff performers rather than matching other teams’ multiyear offers. Veteran slugger Mike Morse left to sign with the Marlins, and wildly popular third baseman Pablo Sandoval signed a massive five-year deal with the Red Sox.

Each of these moves makes a bunch of long-term sense: Morse was a huge defensive liability in the outfield, and Sandoval’s production has been erratic over his five years in San Francisco, with further questions about his fitness clouding the picture on a deal that locks him up through age 33. But the Giants ranked a mediocre 17th in home runs last season, and Morse and Sandoval tied for third on the club with 16 each. The two players brought in to replace them, Nori Aoki and Casey McGehee,1 combined to hit just five home runs last year. A healthy Brandon Belt, who missed 101 games in 2014, could give the team a lift in the home run department, but power still figures to be a major weakness. Barring some unforeseen monster breakout or big trade, it’s tough to see this group matching last year’s better-than-average offense.

The Giants’ slow start at bat hasn’t been their only problem. In particular, World Series hero Bumgarner has scuffled to start the season, posting a 5.29 ERA through his first three outings. His fastball velocity is down 1 mph from last year, and he’s struggled to miss bats early on, recording just 11 strikeouts in 17 innings.

Thanks to some awful pitch execution last night, he nearly took his second loss of the season.2 Facing Paul Goldschmidt with runners on second and third and two outs in a 1-1 tie, the Giants elected not to intentionally walk the All-Star first baseman. That still left room to pitch carefully to Goldschmidt, in the hopes of inducing weak contact on a borderline pitch. Instead, Bumgarner challenged Goldschmidt not once but twice on elevated fastballs. He got away with it the first time. The second time, Goldy launched a three-run homer, and Bumgarner had his second straight outing with at least four earned runs allowed.

Even without their ace’s lack of form, the team’s loss of pop and natural regression after an amazing year together mean that the Giants are likely to pull back a bit in 2015. But for a club that won a championship despite a rash of injuries, the fallback might not be so bad, as there’s no way — outside of the tinkering of a cruel god — this team can have as many health issues as it did last season. Plus, a good portion of San Francisco’s early offensive woes can be traced to lousy luck, and Bruce Bochy might be the best manager in the game, someone who could squeeze a win or two out of the schedule by himself. If Bumgarner’s slow start proves to be an aberration — it’s only three appearances, but last season’s 270 innings pitched are cause for some concern — there’s enough pitching here to keep the Giants in most games, too.

In other words: Don’t hope for a World Series repeat. But you can at least bet on a return to watchable baseball.