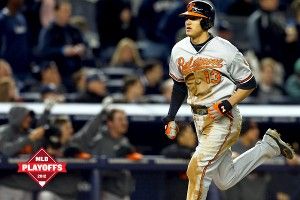 Nine things we learned on a quadruple-header Thursday that sent two teams to the next round and set up two more Game 5s today (making it four Game 5s out of four):

1. The Baltimore Orioles are baseball’s home for wayward children … if each of those children became a Nobel Prize winner.

Joe Saunders has now saved the Orioles’ season twice in the past five games. First, Buck Showalter surprised the baseball world by pitting the soft-tossing, relentlessly mediocre lefty against the Rangers, baseball’s highest-scoring team; Saunders negotiated 5⅔ innings of one-run ball, pushing Baltimore to the ALDS. With the O’s trailing the Yankees 2-1 in the series, he got the call again … and again pitched exactly 5⅔ innings of one-run ball. Saunders walked four and escape three jams after putting the leadoff man on base, but it was one-run ball nonetheless.

With his lifetime 4.15 ERA and 4.56 FIP, Saunders is the Rolls-Royce of Orioles scrap-heapers. He’s got nothing on Nate McLouth, for one. An All-Star and Gold Glover in 2008, McLouth’s career nosedived fast from there, to the point where he was hitting .140/.210/.175 in 62 plate appearances this year before the Pirates cut him loose. Where Saunders at least represented a cheap pickup for a somewhat competent innings-eater, McLouth was scraping the bottom of the barrel, as injuries and a lack of organizational depth forced GM Dan Duquette & Co. to reach for an able body. Then McLouth somehow hit .268/.342/.435 in the thick of a pennant race. Then Thursday night, he did this and this.

In the battle for lightest pedigree, Darren O’Day has them both beat, by a lot. Baseball has a pathological bias against unorthodoxy, and fewer brands of baseball player trigger more of that bias than sidearm or submarine pitchers. O’Day has felt the full brunt of that discrimination over the course of his career. He went undrafted out of college despite pitching well in a strong program at the University of Florida. The Angels signed him as an amateur free agent, let him toil in the minors for years, then left him unprotected in the Rule 5 draft. He’s been claimed twice on waivers, the second time by Baltimore this offseason after the loaded Rangers couldn’t find any room for him on the roster. Beyond his funky pitching motion, O’Day’s battled through frequent injuries and even at his best wasn’t what you’d call an elite reliever. But the guy can pitch, so much so that the Orioles grabbed him during the short period between Andy MacPhail’s departure and Duquette’s arrival. O’Day enjoyed a career year as a shutdown setup guy for the O’s, and he’s continued that dominance in the playoffs. With 4⅓ scoreless innings already under his belt this postseason, O’Day got summoned in the eighth inning of Game 4 and absolutely throttled the Yankees, tossing 2⅔ scoreless, allowing just one hit, and breezing through one turn through the order in just 30 pitches.

Necessity is the mother of invention when you’re a team like the Orioles, which for a while was just trying to fill roster spots. But the contributions of players like Saunders, McLouth, and O’Day — or hell, even the loaded Yankees striking gold with a bargain-bin Raul Ibanez — offer a reminder that Dumpster-diving matters, and that the teams that do it best can occasionally reap gigantic benefits.

They’ve scored just six runs in the past three games, with several key hitters looking absolutely terrible. Robinson Cano is 2-for-18 in the series. Curtis Granderson is 1-for-16 with nine strikeouts. Nick Swisher is 2-for-15 with no extra-base hits, and as Andrew Marchand notes, he’s been battling longer-term woes, going 1-for-34 lifetime in postseason at-bats with runners in scoring position. Alex Rodriguez doesn’t have a hit off a right-handed pitcher all series, and O’Day struck him out on a pitch roughly 12 hectares off the plate. On Thursday, we weighed the competing forces of not overreacting to small sample sizes versus weighing subtler factors in player evaluation. With a right-hander starting for the O’s in Game 5, might the Yankees start Eric Chavez at third over A-Rod, and/or make other dramatic changes in an attempt to shake up the lineup? The broadest math would suggest Joe Girardi make few changes to his slumping lineup, maybe even no changes. But managers love to tinker, and Girardi would have PR on his side if he made a move or two. Expect something to change.

The Yankees and Orioles playing three games in a row, combined with Thursday’s contest going 13 innings and Game 5 being an elimination matchup, means we could see a starting pitcher or two enter at some point today with the game on the line. The Orioles would seem the more likely bet, with Jason Hammel still not far removed from injury and lacking CC Sabathia’s stamina even in the best of times.

We’ve seen what pitching in short relief stints can do for starters’ velocity and overall performance, whether it’s Tommy Hunter discovering a 100-mph fastball last month that no one knew he had in him or Jordan Zimmermann adding three ticks to his usual fastball while striking out the side in the seventh on 12 pitches. Maybe we can’t evaluate players based on hypotheticals. But it always mystified me how anyone could consider relief pitchers for major awards. Because they throw ⅓ or even ¼ as many innings as the league’s best starters, but also because if a journeyman fifth starter like Tommy Hunter can suddenly pitch like peak Eric Gagne (another failed starter) the minute he gets a regular bullpen gig, maybe relief pitching is much easier than we thought.

… Lance Lynn. A starter for most of the season, the Cardinals right-hander did lose his rotation job at one point this season, then lost it again for the playoffs when Chris Carpenter returned. He, too, showed he could harness the power that comes with knowing you don’t need to pace yourself through seven innings, touching 97 on the radar gun Thursday when his fastball has averaged below 93 mph this year. The velocity boost was nice, but the bigger question is, why was Lynn pitching in the first place? The Cardinals’ best reliever is closer Jason Motte. The Nationals had the dangerous top three of their order due up in Jayson Werth, Bryce Harper, and Ryan Zimmerman. Hell, if you’re numerically superstitious, it was the ninth inning. It’s possible that manager Mike Matheny didn’t see a huge gap in ability between Lynn and Motte, and that he envisioned Lynn and his stretch-out arm pitching well into extra innings if all went well, or that he had one of those hidden reasons in mind when he kept his best bullpen arm in dry dock. The Occam’s Razor answer, that Motte is the team’s closer so Matheny didn’t want to use him without a lead, is too unsavory to consider.

6. Jayson Werth, not a member of the A-Rod Club.

More than perhaps anyone in any other profession, pro athletes are judged by the money they make as much as they are their actual performance. If Alex Rodriguez were a generic, declining 37-year-old and not the highest-paid player in the game, people might be more forgiving of his slide … despite all the other things that make him so very A-Rod. Plenty of other highly paid players similarly attract tons of scrutiny, for reasons both practical (by paying one player a mint, you’re limiting your team’s ability to spend elsewhere) and cynical (especially media-driven stories about greed and apathy and other factors that might have nothing to do with an aging star failing to produce).

Jayson Werth is undeniably overpaid, his seven-year, $126 million contract the kind of WTF deal that would have you remember where you were when you first heard about it (on a stoop in Brooklyn in the cold, shivering while waiting for my buddy to make it back to his apartment … WHERE THE HELL ARE YOU, DAVE?!). But he’s also a very good player when healthy, looks like the lankiest hobo you’ve ever met, and talks shit about the Phillies. At the risk of positing a difficult-to-prove opinion, he seems blessed with plenty of Natitude, and with adoration from D.C. fans. Any player who hits a walkoff homer to save the season for at least one more day would surely get the king-for-a-day treatment. But when Werth battled Lynn in an at-bat for the ages, caught a break when strike-happy Jim Joyce suddenly saw fit to call a ball on what should have been strike three on pitch 11, and finally cranked the 13th pitch of the at-bat over the wall in left for a game-winner, jumped out of his shoes in his final approach to home plate, exchanged bro hugs with Bryce and generally looked like a delirious lumberjack for about 20 minutes, it seemed a perfect way to end a night of fervent, costumed flag-waving.

Sure, Edwin Jackson got rocked in his Game 3 loss to the Cardinals. But Stephen Strasburg’s replacement in the Nats’ playoff rotation was actually Ross Detwiler, not Jackson. And Detwiler just tossed six innings with only three hits and no earned runs allowed. Really stings when the narrative doesn’t quite match up with the facts.

From ESPN’s David Schoenfield: Justin Verlander’s Game Score of 89 is the best ever in a sudden-death playoff game. Koufax had 88 in Game 7 of the 1965 World Series. Fifteen walkoffs and a magical season that defied every prediction … the A’s still had no chance against the best pitcher on the planet. The Tigers might be a flawed team that’s really thin after its top five players, with a lousy defense offering little support for a talented rotation. But Verlander could make two more starts in the ALCS, assuming we get a long series. That alone makes them terrifying.

They’re one dominant starter thinner this year with Tim Lincecum now reduced to playing long man out of the bullpen — albeit a very good one so far. Losing Melky Cabrera robbed the Giants of the league’s batting champion (by any measure except the one MLB made up on the spot to avoid looking bad). And they appeared generally overmatched by a Reds team that seemed to have it all, and seemed poised to skate to the next round after winning the first two games of the NLDS in San Francisco.

Not so much, as it turned out. For the second straight game, the Giants roughed up Cincinnati’s starter to take an early lead. And Buster Posey continued to cement his status as the NL’s worthy MVP this year (even we can’t officially count the playoffs), crushing a back-breaking grand slam off the highly ineffective Mat Latos. If the Cardinals knock off the Nats today, the Giants would own home-field advantage in the NLCS and have a chance to leverage a team built on a couple of top starters, a manager who gets the most out of his bullpen, a few useful role players, and Buster Posey into a World Series winner. All that’s missing is the sight of playoff heroes Cody Ross, Juan Uribe, and Edgar Renteria celebrating at home plate.