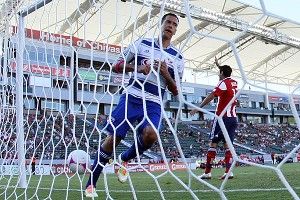 When the United States men’s national team fell 2-1 last month in Jamaica, it was the squad’s first loss in 19 games against the Caribbean country. But American supporters no doubt noticed something familiar about the match: the faces of the Reggae Boyz. Four of Jamaica’s starters and two of the substitutes play in Major League Soccer. In total, coach Theo Whitmore had nine MLS players on his roster for the vital World Cup qualifier.

Whitmore was not the only one in the region to turn to the American top tier for talent. During the September international break, non-U.S. CONCACAF countries called up 32 MLS players. For the October World Cup qualifiers that start on Friday, 28 such men — including seven from Canada, six from Honduras, and five from Jamaica — received calls.

As salaries grow, the quality of play improves, and the infrastructure develops, MLS attracts more talent from Central America and the Caribbean. Roger Espinoza, a 25-year-old who starred for Honduras during the London Olympics, moved to the United States when he was 12, and finds that some of his younger countrymen want to play here. In the past, a young Honduran would dream of playing in Mexico or a league in South America. Not anymore.

“All the players that are in MLS would have been in the Mexican League before, but they know that the U.S. is a great country to live in. The league is getting better so they want to come,” the Sporting Kansas City star says. “Hondurans know the infrastructure of MLS. Things are good in the U.S., especially here with the new stadium. A lot of the guys from the Honduran U-23 team wanted to play in the U.S. after they saw the stadium during Olympic qualifying. They saw that the U.S. is putting the money and the work in to improve how the game is played here.”

FC Dallas forward Blas Perez plays for Panama’s national team and encourages players on the Panamanian national team to consider MLS. “I try to tell the young players about what a great opportunity is.”

The majority of players growing up in Central American nations or the Caribbean islands now see MLS as an aspirational league. For many, reaching a team in Europe is a bridge too far — either due to talent or distance — but the United States is closer, mentally and physically. International club tournaments like the CONCACAF Champions League give them a chance to gain familiarity with MLS teams, players, styles, and facilities, while offering MLS coaches an opportunity to scout talent and make inroads.

The result is more, and better, talent coming to MLS from CONCACAF countries. Last month, Soccer America reported that 68 of the 132 starters on the 12 MLS playoff contenders were internationals. Some of these players hail from non-CONCACAF countries — Colombians make up 4.7 percent of MLS, for example — but plenty are from the region. Which raises two questions: 1) Is MLS making CONCACAF’s national teams better? And 2) How does the affect the U.S. national team?

The answer to the first one is obvious: Yes. “All of our opponents are better than they were a few years ago. Central America’s teams are very technical and difficult to play against; there is great athleticism, speed and ambition in the Caribbean,” American coach Jurgen Klinsmann said in a recent interview on FIFA.com. That improvement cannot be entirely attributed to MLS, but the league helps.

The second question is trickier. The percentage of MLS minutes played by Americans drops nearly every year — down to a little over 50 percent of the available time in 2012 — but the number of Americans making 10 appearances in an MLS season could hit an all-time high. Kyle Beckerman was the only MLS-based starter who took the field in Kingston, but nine of the 11 players spent at least some time developing domestically before moving abroad. Seventeen of the 23 men on the 2010 World Cup roster called MLS home for a period of time.

I suspect this scenario will continue for a least the next decade. While, to its credit, MLS is now seen as an end point for many of the best players from other CONCACAF nations, Americans continue to aspire to European leagues. The Stars and Stripes’ best players will move abroad when they get an opportunity. MLS will help increase the depth of the U.S. player pool — giving an increasing number of young Americans a chance to develop — but perhaps not the top-line talent. A recent survey reported that 56 of the 100 American players call MLS home, but only three of them were in the top 20.

The rest of CONCACAF, meanwhile, will benefit from players getting opportunities in a strong league with experienced coaches. “I am older, but I still learn new things every day,” the 31-year-old Perez says. This isn’t necessarily bad for the USMNT. With the exception of Mexico, the Americans still boast more than enough talent to beat the regional opposition. An improved Panama team (or one from Costa Rica, El Salvador, etc.) gives the Americans more experience in difficult matches without actually doing much to hurt their chances to qualify for the World Cup. A rising tide raises all boats. Until, of course, that boat travels to Jamaica and gets poked full of holes.

Noah Davis (@noahedavis) is a freelance writer living in Brooklyn.