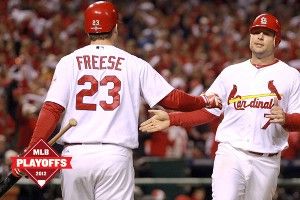 Thoughts on a night of Game 4s while wondering if McKayla’s been replaced.

BABIP BEASTS … SOMETIMES
The Cardinals made a habit of bashing other teams into submission this season, even when they didn’t go yard. The Redbirds posted a .316 batting average this season on balls in play, second only to the Rockies (who play in a ballpark the size of Greenland) and well above league average in the low .290s. Six Cardinals with 300 or more plate appearances this year posted BABIPs above .330: Jon Jay (.355), David Freese (.352), Matt Carpenter (.346), Matt Holliday (.337), Allen Craig (.334), and Skip Schumaker (.332). One way to boost BABIP is to parlay blazing speed into a bunch of infield hits. But none of these players other than Jay stole more than four bases this year, or is known for being fast in general. All the players on that list with more than one full season in the majors (Jay, Freese, Holliday, Schumaker) have registered career BABIPs of .323 or better.

Game 4 was a hit parade. St. Louis rapped out 12 hits in 34 at-bats, none of them for home runs, thus compiling a .353 batting average on balls in play for the game.

So what gives? Have they seized on some kind of inefficiency? You’d think it might be simply finding line-drive hitters, but they ranked 15th in team line-drive percentage this year. You’d imagine they might bunt for hits more than other teams, but they ranked among baseball’s 10 worst teams in that category. Could it be hitters who place the ball better than their peers? Or some other, tough-to-see factor? Whatever it was, for one year at least, the Cards put on a hitting clinic, and other than Holliday, the players doing it best were all low-priced complementary guys.

Still, Thursday night’s game constituted an aberration for the Cardinals’ hitting results this postseason; St. Louis hit .290 or lower on balls in play in eight of their previous nine playoff games. Tim Lincecum alternating between missing the plate by a mile and dishing out a bunch of meatballs when he did find the strike zone, and Guillermo Mota being generally terrible, played big roles in the Cardinals’ hitfest.

CLUTCH … ISH
It helps when your hits fall in at the right time, which is what has happened for the Cardinals against Giants pitching. St. Louis went 5-for-12 with runners in scoring position in Game 4, making them 9-for-29 (.310) in that situation for the series. The leader in that department has been Pete Kozma, the smallish fill-in shortstop who’s flourished since taking over for the injured Rafael Furcal last month. Kozma is now a perfect 3-for-3 with runners in scoring position during the NLCS. Even more so than batting average on balls in play, abnormally high batting averages in high-leverage situations are highly susceptible to regression. But as long as Kozma continues to hit like David Eckstein in the 2006 World Series, Cardinals fans’ exuberance will remain — rational or not.

THE GIANTS HAVE A TWO-MAN ROTATION RIGHT NOW
Lincecum’s problems started way back in April, when he struggled with the same command issues and tossed an endless stream of crooked numbers on the scoreboard. He fared much better in a 13-start stretch from mid-July to mid-September, trimming his walk rate and posting a 3.06 ERA while maintaining his strikeout-an-inning pace. But Lincecum’s woes returned during his final two starts of the season. The Giants thought a few solid relief appearances might’ve turned the tide, but that was largely Lincecum dialing up his fastball knowing he’d only be needed for a few innings at most. Tim McCarver did a good job of spotting the inconsistent position of Timmy’s landing foot in Game 4 and the pitcher’s resulting inability to control where the ball’s going.

You might’ve felt optimistic as a Giants fan knowing Madison Bumgarner’s turn is coming up in the rotation for Game 5. But the normally excellent lefty has allowed four or more runs in seven of his past nine starts. Ugly, granted. But so ugly that Barry Zito is deemed a better choice to try to save San Francisco’s season? Like Joe Girardi reacting to Curtis Granderson’s slump by using an extremely rusty Brett Gardner instead, Bruce Bochy’s desire to bench a struggling regular isn’t terrible on its face … until you consider what the alternative is.

STARTING HECTOR SANCHEZ DIDN’T HELP, EITHER
By using Sanchez to catch Lincecum, Bochy was putting too much credence in the idea of a personal catcher. Lincecum got smoked early in the year, so Bochy had Sanchez start catching his games. The results were virtually identical: .755 OPS with Sanchez catching, .769 with Posey behind the dish. Meanwhile, Sanchez being in the lineup hurts the defense (Posey’s a better defender behind the plate, and can look like he’s out of position at first, as he did Thursday night) and the offense (Brandon Belt might be in a slump, but Sanchez is an on-base sieve who didn’t help his cause with three strikeouts and an 0-fer in Game 4). The Giants probably lose this game even with Posey behind the dish. But starting subpar players isn’t going to help your team get back in this series.

TWO OUTFIELDERS MIGHT’VE MADE THEMSELVES SOME MONEY
Angel Pagan was a human highlight film in an otherwise dreary night for the Giants. The speedy center lashed a triple and a single in four at-bats. He also made two sparkling plays in the outfield, including this home run–robbing grab off Yadier Molina. Pagan’s been outstanding in this series, hitting .333/.368/.611 and playing solid defense throughout.

All Delmon Young did in the ALCS was drive in as many runs by himself as the Yankees did all series. This marked the second straight year that Young destroyed New York with his bat, and he’s now slugged seven homers and knocked in 14 runs in his past 18 playoff games. For his efforts, Young earned ALCS MVP honors.

Both Pagan and Young may have boosted their free-agent stock with strong playoff performances. Only one deserves a serious look.

Pagan bounced back from a rough 2011, posting a line of .288/.330/.448, stealing 29 bases, and earning about four wins by Baseball Reference WAR. Fun fact about the Giants center fielder: Since 2009, he’s produced more Wins Above Replacement than one Alex Rodriguez. Meanwhile, Young hit just .268/.296/.422 in 191 regular-season games with the Tigers over the past season-plus. He’s been a below-average defender his whole career, and ranks among the worst base runners in the majors. Neither’s a great bet for a long-term contract, with Pagan being an injury risk who turns 32 next year and Young being lousy at baseball in non-October months. But if you’re sizing up both players for 2013, Pagan is the better choice.

Until then, Delmon’s got a lovely consolation prize: a date with the World Series.