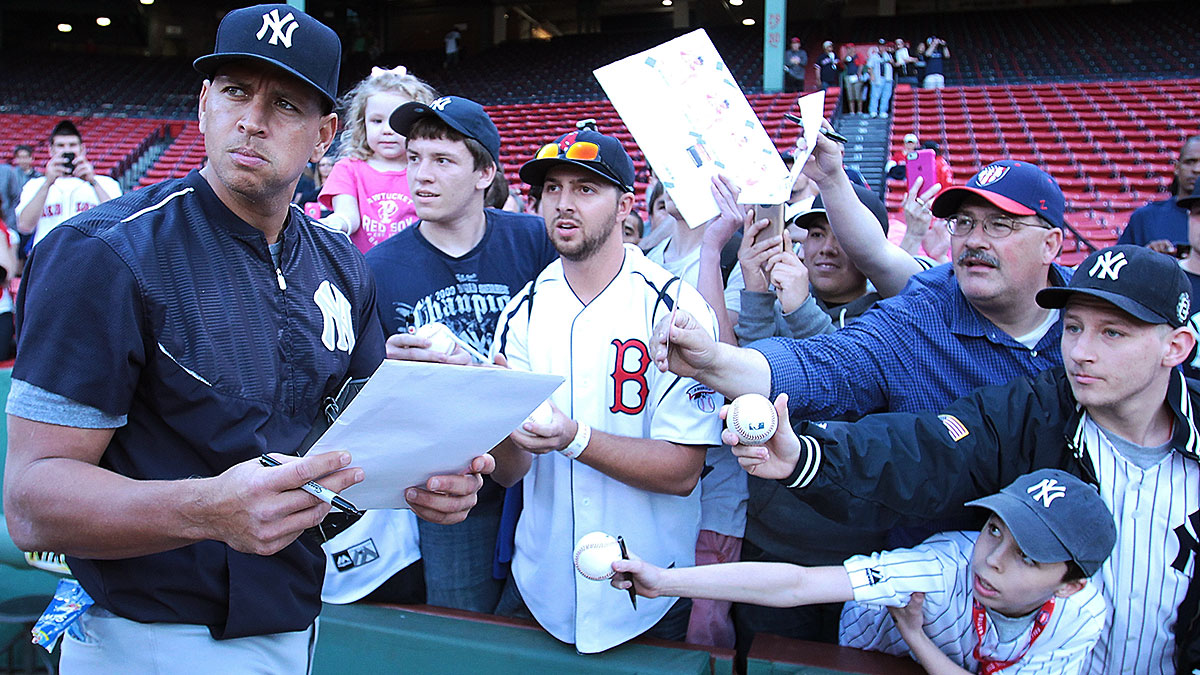 Yes, and how outrageous is that?

Rodriguez is nearly universally reviled, an admitted drug cheat whose career earnings are creeping up toward $400 million in salary alone. He is so profoundly, uncomfortably weird that he inspired Jeb Lund, in one of the great moments of trenchant clarity in recent sportswriting history, to use the phrase “uncanny valley” while describing him. And yet Rodriguez is the good guy in a dispute with the most popular team in baseball.

On Friday, Rodriguez hit his 660th career home run, tying Willie Mays for fourth all time and, more importantly, entitling him to a $6 million “marketing bonus” from the Yankees.

Bullshit. The Yankees can market anything.

The Giants have no problem marketing Barry Bonds, or, for that matter, Mays, who allegedly distributed amphetamines to his teammates.

It’s about greed and animus, and considering the lengths to which Yankees management went to get Rodriguez suspended and recoup most of his salary, or the disgusting manner in which Angels management behaved toward Josh Hamilton just this past month, we shouldn’t be surprised.

If I were feeling glib, I could point out that the Yankees didn’t have a problem with Rodriguez’s drug use and compensation in 2009, when he hit .286/.402/.532 en route to a World Series title, nor do they intend to take back any of the 866 regular-season wins Rodriguez helped them earn between 2004 and 2012, or strike from the record any of the six division titles they won in that time.

It’s just that I don’t think “I don’t like you anymore” is a good enough reason to renege on a contract.

This is part of a larger problem in sports: the sense that owning a team also means owning the players. It’s why, when Paul George hurt himself playing for Team USA, Mark Cuban lost his mind. Owners don’t want to be accountable, financially, for the decisions they make, which is why Rodriguez and Hamilton were singled out not for behavior, but for performance.

Since 2002, the owners have taken an increasingly larger share of the financial pie. MLB players now get about 38 percent of revenue, which the three other major U.S. sports unions — known for getting taken to the cleaners every time a CBA runs out and an owner wants to reupholster the interior of his Gulfstream — would tell the MLBPA amounts to robbery. And yet, whenever an older player fails to live up to the expectations of a contract that everyone thought was insane when it was signed, the owners don’t want to pay the cost of a bad investment.

When you put a harness and a leash on a cat, the cat will often pretend not to be able to walk because it doesn’t like how the harness feels. The human equivalent is the Yankees claiming not to be able to market Rodriguez’s home run milestone. If it’s true that they can’t, well, blaming Rodriguez for the contract wording would be like Coca-Cola suing sugarcane farmers when they couldn’t sell New Coke.

Maybe the Yankees will get away with it. After all, Rodriguez is such a pariah that it’s hard to be sympathetic about him losing a few million dollars, and if there’s one safe bet in sports, it’s that the blind loyalty of fans to a team will lead them to side with ownership, and that owners will cheerfully exploit that loyalty every time. I don’t know if it’ll work this time — I’m not a lawyer.

But consider what Jason Wojciechowski, who is a lawyer, wrote for Vice Sports about another recent slimy money grab by a major league owner.

“The specifics of one poor, slugging sap’s situation aside, the larger issue with ‘if it’s not illegal, it’s legal’ — beyond that it isn’t how the law works — is that it accepts a notion of proper business behavior that’s wholly divorced from ethics, morals, or respect for the well-being of others … ‘Firms should do whatever they can get away with to make as much money as possible’ is one way to design a society, certainly, but it’s not the only way, and surely is not the one most people would choose if they realized they had a choice.”

It’s difficult to imagine a scenario in which Alex Rodriguez is in the absolute moral right, but the Yankees have found it. When you strip away all the PR, this is a story about a company refusing to pay an employee for work he performed, so if you’re going to be outraged and hold forth on morals and the bedrock of an American institution, remember that men can do worse things than cheat at baseball.

The Yankees have placed a $6 million bet that you won’t.

The Devil in an Empty Arena: Las Vegas on Fight Weekend