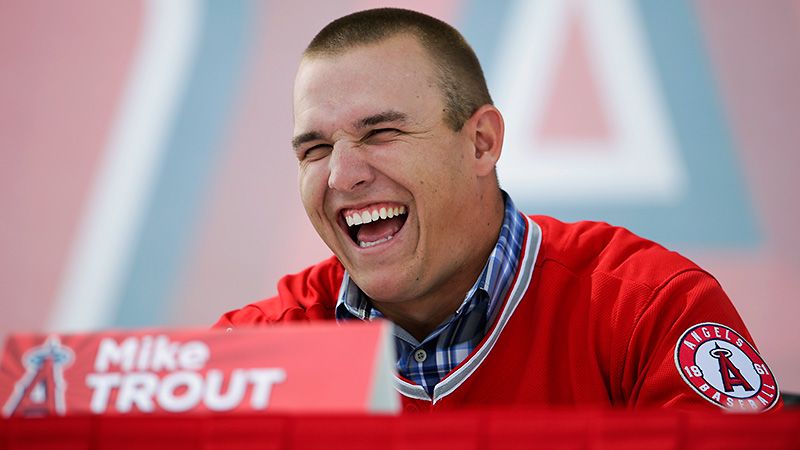 Mike Trout’s six-year, $144.5 million contract extension is one of those deals that makes sense for both sides: The Angels locked up the game’s best player through 2020, likely at a steep discount over his eventual free-agent rate; Trout left money on the table, but he also made his future grandkids oil-baron rich while retaining the right to hit the open market at age 29.

When Miguel Cabrera got his ludicrous extension last week, one of the first talking points was “Mike Trout’s about to be a very happy man,” and sure enough, Trout’s happy. The Angels are, too. So now the question becomes: Which players are about to be happy because of what Trout just got? While the pre-free-agency contract bonanza extends to players of all positions and ages, for the purposes of this exercise, let’s look at guys like Trout, or as close to “like Trout” as it’s possible to be: talented position players with at least a couple hundred major league plate appearances who aren’t yet eligible for arbitration.

Remember, Trout is merely the latest pre-arbitration player to agree to a multiyear contract extension: Starling Marte, Buster Posey, and Andrelton Simmons, among others, have delayed free agency by a couple years to tap in early to guaranteed seven- or eight-figure annual salaries. Posey’s deal was actually for more years (nine) and dollars ($167 million) than Trout’s, but Trout stands to make more than $33 million annually over the final three years of his deal, a record by far for a pre-arbitration agreement.

And of course, there are some players in Trout’s cohort who are very unlikely to ink long-term deals. Wil Myers plays for a team that can’t afford to give him a deal that eats into his free agency. Brett Lawrie is one of the best athletes in baseball — and … ahem … (puts on zoot suit, adopts Don Cherry voice) … “a good Canadian boy” — and plays like he’s pissed off that the Rogers Centre turf won’t stain his uniform, but after a stellar first half-season, he’s failed to display the consistency or health to warrant a long-term contract. And then there’s Bryce Harper, who I hope will reject any pre-arbitration extension offers that come his way and test the theoretical limits of the free-agent market because Scott Boras tells him to.

There’s also a difference between the Trout/Simmons/Marte pre-arbitration extension and the one Evan Longoria signed in 2008 or the one George Springer reportedly turned down last month: A team can lock up a player with only a few days’ worth of major league experience at relatively great risk, but with equally great savings. Guys like Trout, Posey, Marte, and so on are less risky, because they’re signing deals after proving they can produce consistently at the major league level.

I could make the same claim about Manny Machado. I know I won’t shut up about him, but there are two reasons the Orioles should try to lock him up now. First, he’s reportedly unhappy about making $519,000 this year, and even though that’s what the CBA dictates, I wouldn’t be happy making that if I were him, either. If the Orioles give Machado a little more money up front in exchange for a couple free-agent years, they can keep their tent-pole third baseman in town longer while also avoiding potentially nasty arbitration hearings. A happy franchise player makes for a happy franchise. Second, while Machado is only a decent hitter for a third baseman right now, he could improve with the bat, and even if he doesn’t, his offense will look a lot better once J.J. Hardy leaves and Mini Keg moves to shortstop. Machado will be even more expensive when he puts up a nine-win age-24 season. The Orioles aren’t a conspicuously rich team, but they also aren’t poor. They should be able to scare up the cash to keep Machado in orange and black through his twenties.

The Seattle Mariners are in the Orioles’ tax bracket, and they also have some young infielders to lock up. With Robinson Cano on board, the scuttlebutt is that either Nick Franklin or Brad Miller will be traded. Those two and Kyle Seager are all in their twenties and all look like solid regulars, though Troutlike or even Machado–like (Machadovian? Machadoesque?) careers are unlikely. On a team with inconsistent pitching and too many first basemen, the other infield spots are strengths. Seattle should trade one of these guys and lock up the other two.

While the pre-arbitration contract extension is now so prevalent that it’s hard to find guys who aren’t completely unproven, terrible, or signed to a deal of some sort already, one other name bears mentioning: Nolan Arenado, Rockies third baseman. Arenado was simply deplorable with the bat as a 22-year-old rookie, but he was still worth somewhere in the neighborhood of three wins on the strength of his glove alone. The Rockies should wait another few months to see if the defensive stats are a mirage and/or if Arenado learns to hit, but he’s good enough to be part of a rebuilt and contending Colorado team and young enough to still be good when the process is complete — which may be at the twilight of human civilization as we know it, so screwed up is that franchise.

As always, Trout is so exceptional that using him to predict others’ value is folly. He breaks the curve. Still, his pre-arbitration extension is consistent with a recent trend, and Machado, Arenado, and the Seattle group could be the next to benefit.

The Philadelphia 76ers vs. History and the Pistons