The Philadelphia 76ers vs. History and the Pistons 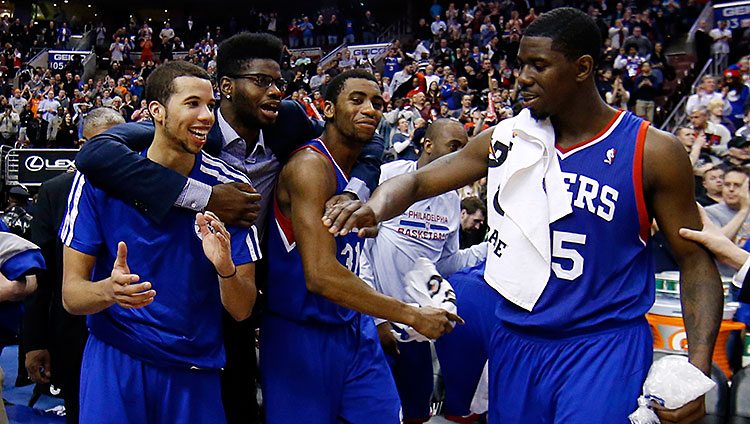 How did I find myself here? In the midst of the Elite Eight, watching the 76ers, their heads heavy with the burden of history, taking the home court on Saturday against an anti-charismatic Pistons team, bland and confused as tourists, who looked like they’d prefer to be anywhere, even Detroit, than here?

Well, watching Florida deflate the dreams of a bunch of kids from Dayton seemed almost aggressively misanthropic. And even though hearing the name Frank Kaminsky made me feel like I should go mainline ’80s action movies, Wisconsin vs. Arizona sounded about as fun as taking a Sudafed.

So no, it wasn’t about experiencing the perverse joy of seeking out the most irrelevant possible alternative to a huge event you don’t care about. Because the historical record was in question, folks. We don’t always get the privilege of aspiring to make history. Sometimes, we just desperately, hopelessly try to get out of its sights.

The 2013-14 Philadelphia 76ers, a bizarre collection of undeveloped talent and miscellaneous names — Casper Ware, Casper Ware, we have your wallet, please report to the front desk — had bungled their way to 26 losses in a row, tied for the longest streak in major professional sports. They had done this by running and gunning but forgetting to load the guns: The 76ers play the league’s fastest pace while posting its worst true shooting percentage, which is like knowing your car’s engine is shot and deciding to drive it as much as possible. Loss no. 27 would be the one that cemented their status as the worst team of all time.

Fortunately, they drew the Pistons. At the beginning of the year, the Pistons were playoff hopefuls. They are bad in the sick way that only comes from having once expected to be not-bad. For Saturday’s game, this meant viewers, both at home and in the Wells Fargo Center — and there were a shocking number of people at this game, “shocking” in this case being any number greater than zero — were watching one of the most unique phenomena in sports: the battle between irrelevance and infamy.

The 76ers’ only real assets, Michael Carter-Williams and Thaddeus Young, played adrenaline-silly, hustling up and down the court and hurtling after loose balls. Henry Sims, who is, apparently, a professional athlete, scored 16. The Philadelphia crowd cheered, seemingly without irony.

With masterful nihilism, Detroit’s players turned the ball over, played matador defense, and did everything they could to lose the game. Andre Drummond leapt at random. Rodney Stuckey threw the ball at cameramen. Kyle Singler was ignored. Josh Smith continued to dismantle his own reputation. Knowing that this season is best left undiscoverable, undistinguished, as far away from history as possible, the Pistons did not try to win: Even if it would be the Sixers going down in the record books, Detroit had zero interest in playing the accomplice.

When the third quarter ended and the Sixers, who hadn’t won in two months, led by 30, it was clear the game had served its purpose. Even though I had been rooting for the Pistons — because how could I, a mere mortal, resist the pull of history? — Philly had wrought a miracle. Things were bad. They still are. But at least for one night, the 76ers reminded us that there are things much worse than irrelevance.