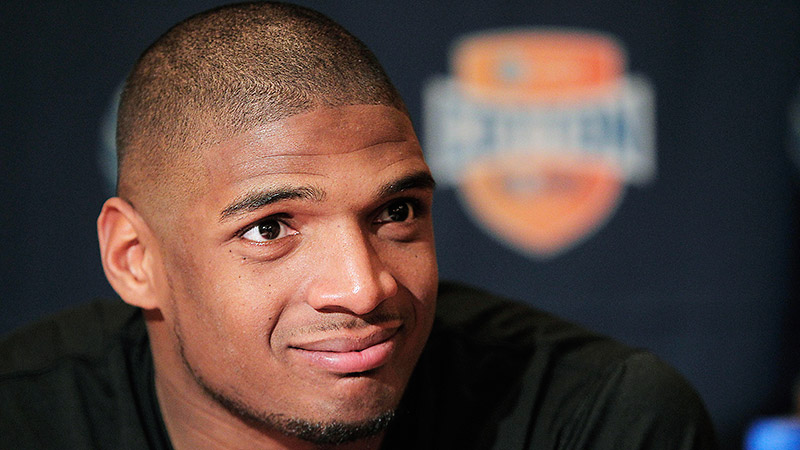 There’s a temptation not to make a big deal out of former Missouri Tiger and current NFL draft prospect Michael Sam announcing, “I’m an openly proud gay man,” because nobody who knew Sam was gay before Sunday’s public reveal did anything of the sort.

That may actually be the biggest deal of all. At some point an unknown distance away on our timeline, sexual orientation won’t make headlines. In a certain locker room in Columbia, that moment is long past. Last summer, Sam came out to his teammates. Some of the 2013 Tigers had known Sam was gay for years. It was news to others. However long his teammates had known, it was news that didn’t travel very far past that locker room. Sam was Sam, and that was that, and the team went on to record 12 wins, an SEC East title, and a Cotton Bowl victory.

“Telling the world I’m gay is nothing,” Sam said in interviews with ESPN, the New York Times, and Outsports, comparing coming out to harrowing moments he experienced growing up — more moments of heartbreak than any one human being should have to shoulder. And he’s right. But he also seems to understand that society needs people like him to help get everybody to that point of casual acceptance. Some future generation will know how big a deal this kind of thing could be only from reading American history.

But to make it commonplace, somebody’s got to go first. And so it’s fallen to Sam, crowned as an All-American by the media, anointed as SEC Defensive Player of the Year by opposing coaches, and awarded MVP honors by his own team, to say something like this: “I’m a college graduate. I’m African American, and I’m gay. I’m comfortable in my skin” — and head off to the NFL combine. No big deal, and a very big deal, at the exact same time.

There are kids out there right now, in every state, on various stages of a similar journey, and they’ll find much to admire in the way Sam has conducted himself. Hopefully, there are even more kids out there who’ll find much to admire in the way Sam’s teammates handled this situation, both in their initial reaction and in letting him tell his story in his own time and in a manner of his choosing:

“Coaches just wanted to know a little about ourselves, our majors, where we’re from, and something that no one knows about you,” Sam said. “And I used that opportunity just to tell them that I was gay. And their reaction was like, ‘Michael Sam finally told us.'”Asked what that moment felt like, Sam said, “I was kind of scared, even though they already knew. Just to see their reaction was awesome. They supported me from Day One.”

On a long enough timeline, Sam will be just the first in a long series of openly gay men to play in the NFL, but saying “just” doesn’t diminish the courage he displayed here. Saying “just” is a look toward that future, where none of this makes the news — where teams’ attitudes toward guys like Sam are in line with those of the guys who played alongside him at Mizzou:

We knew of his status for 5 years and not one team member, coach, or staff member said anything says a lot about our family atmosphere

And where tolerance will be a bragging right — hold up, I’m told we’re already there:

Michael Sam is the first NFL player to come out of the closet. SEC Speed.

Like all draft hopefuls, Sam is heading into a professional life fraught with deep uncertainty. But if you think you know how he’ll be treated in the NFL, ask yourself if you ever would’ve imagined this playing out in a big-time college football locker room the way it did.

This isn’t Sam’s first experience with pioneering: He’s the first member of his family to attend college. And Sam won’t technically be a novelty in the NFL. But he’s the first to do this one thing this one way. And like all pioneers, he’ll forge a path that, one hopes, will make it just a little easier on the next guy, and the guy after that, until there’s a well-worn trail left behind, there for any who need it.