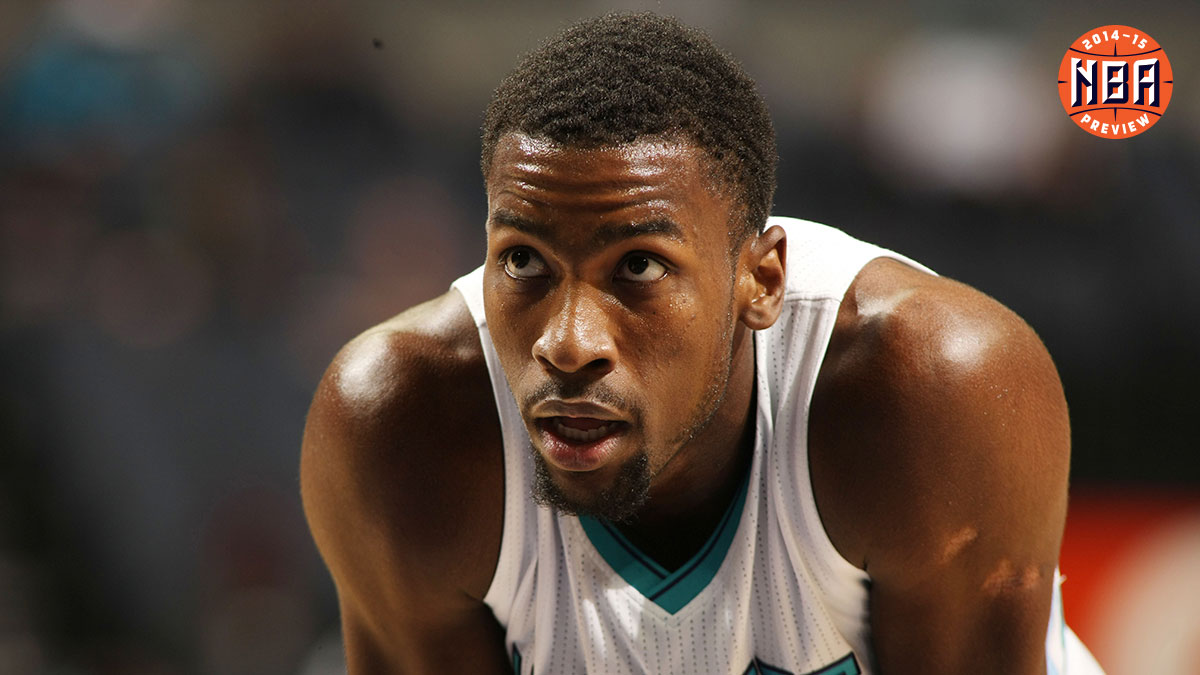 In the past few months, Michael Kidd-Gilchrist has turned himself into a pretty bad jump-shooter, and it’s the best thing that has happened in his young NBA career. No, really. There may never be another case in which the act of shooting 31 percent from 15-plus feet out is reason for legitimate optimism. Yet that’s where we are with MKG, despite everything we know about how percentages work.

If you weren’t aware, Kidd-Gilchrist underwent a complete “shot reconstruction” this offseason, which is usually a whole lot of nothing. Recent examples of shot reconstructions have either immediately devolved into gimmicks (Tristan Thompson) or didn’t go nearly far enough with the overhaul (Tyreke Evans). That isn’t the case with MKG. He legitimately has a new jumper. It’s startlingly different. He’s been eager to show it off.

Though the process began in earnest around five months ago, it’s really been a project two summers in the making. That’s when Kidd-Gilchrist started working with Hornets assistant coach Mark Price. The tentative plan was to be minimally invasive, to allow Kidd-Gilchrist time to grow comfortable with his quirks. Instead of dealing with the issue in its infancy, it was left alone. Unfortunately, coaxing the mechanical flaws only reinforced his flawed form. There was no cosmetic surgery, only botched Botox shots. That’s how we ended up with this last season: 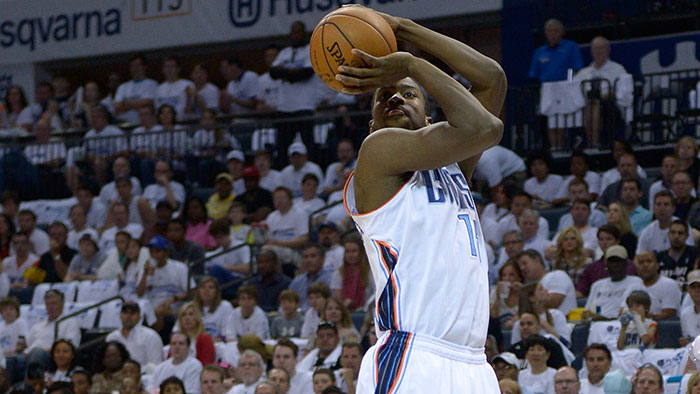 When Kidd-Gilchrist got himself into his shooting motion, his hand and elbows would consistently point away from his target at an acute angle. Not until the last second would his palm rotate to its intended position, and not until a beat or two after that would his arms (somewhat) straighten out. Only then would you even know the ball was supposed to head in the rim’s direction. At times he shot the ball like he was protecting his face from a swarm of bees, and the ball’s release was just a natural byproduct of that reaction. Well, now the swarm’s behind him. There’s nothing left to fear, and so he’s adjusted accordingly.

Overcoming mental hurdles isn’t new for Kidd-Gilchrist. He’s seen the virtues of incremental development. Entering the league as the second overall pick meant increased attention from reporters and increased focus on his speech impediment. During his rookie season, he spoke slowly, methodically, to avoid the stuttering. A couple of summers ago when I talked to him in Las Vegas, he dribbled a ball while looking me in the eye — his way of cutting through the noise and anxiety and just talking. This past April, Kidd-Gilchrist went embryonic, relearning things as basic as how to stand properly from Price.

The progress is looking good, even if the results aren’t quite there yet. In his first four preseason games, Kidd-Gilchrist has taken 13 jump shots from 15 to 19 feet out, which is already a quarter of his total attempts from that distance in 62 regular-season games last year (53). He’s confident. How confident? Check out this jumper he took against the Sixers in their first preseason game:

He’s got three guys converging on him, and he’s still letting it fly! And fading away! Never mind that in no universe should a basketball team require three players to contest MKG at this point. One day this puppy love will erode and plays like these won’t be so cute anymore, but we’re not there yet. This is a guy who was more terrified of taking a midrange jump shot last year than he was of contesting guys 50 pounds heavier than him in the paint. This is a cause for celebration.

Here’s the kicker: Michael Kidd-Gilchrist just turned 21 last month. He’s young — the second-youngest player of the 2012 draft class — and has put in the effort to unlearn many of his bad habits in only five months. How much further can MKG be reconstructed? Is there any precedent for a player of his skill set and piss-poor shooting ability to develop a reliable jump shot?

Yes. Yes there is. 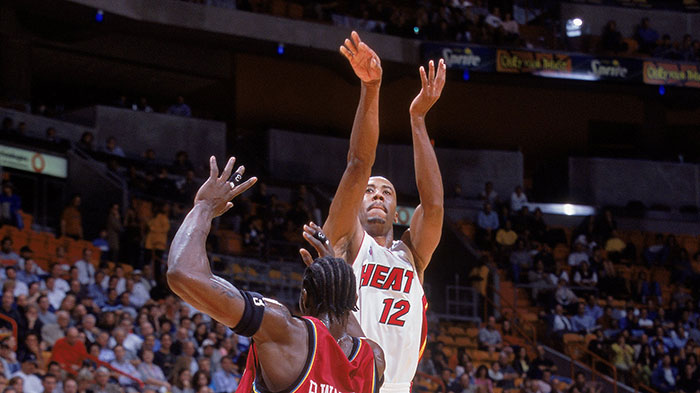 In 1997, the Celtics signed Bruce Bowen and assigned him to work out with Mike Procopio, the current director of player development for the Mavericks and onetime Kobe Whisperer.

Back then, Bowen couldn’t shoot from any farther than 15 feet, and frankly, he couldn’t shoot anywhere within 15 feet all that well, either. But, according to Procopio, he “basically locked himself in a gym and worked on being comfortable and confident with his shooting.”

Another kicker: Bruce Bowen was 26 in 1997, and didn’t become the corner marksman we remember him as until he was in his thirties as a member of the Spurs. It’s been five years since Bowen retired, so here’s a quick refresher: Bowen might’ve been the most one-dimensional shooter ever. His 40.5 career 3-point percentage as a Spur was solely based on his strength from the corners. There was no other area on the floor from which he was even decent at scoring. He is a career 57.5 percent free throw shooter. From 1996-97 to 2002-03, Bowen actually managed a worse percentage from 15 to 19 feet than MKG’s career percentage of 34.7 percent. In all of Bowen’s final six seasons, no less than 84 percent of his total 3-point attempts came from the corner. Bowen took specialization to its logical extreme in the NBA, and thrived. Why can’t this be the blueprint for MKG?

He will never have the innate scoring instincts to shoot fadeaways off the bounce over multiple defenders in actual games, but he has the work ethic to eventually master a specific set shot by rote. Branching out to the corner 3 once he’s further along in his progress sounds like a good idea. He’s already bigger, stronger, more athletic, more savvy on off-ball cuts, and more comfortable with the ball in his hands than Bowen ever was — not to mention much, much younger.

For the first time since he was drafted, it feels like the ceiling has been lifted a bit. MKG is already the best defender on his team, one that finished the season in the top 10 despite not having the ideal personnel for the task. The Hornets are much better with him on the court than when he’s off it. There’s an entire ecosystem within Kidd-Gilchrist’s game, one based on effort, tenacity, and sharp instincts. All it needs is some space to breathe. It’s early, but it looks like there might be signs of life here.

Is MKG’s jumper a development worth tracking? I suppose that depends on how much you believe in the player. Michael Kidd-Gilchrist wore his complete lack of confidence in his shot like a scarlet letter last year. It was easy to fall into the same state of hopelessness watching what was, essentially, a neutered beast. The great thing about being 21 is that there’s a lot of time to familiarize yourself with the person you’re becoming. His jumper isn’t there, but it’s somewhere. Maybe someday, our shot expectations for the guy will be the thing in need of reconstruction.