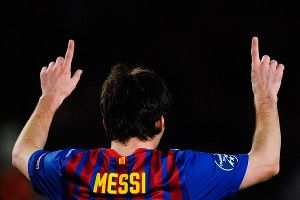 When Messi is on his game (which is usually), he is completely unplayable. I am not Gabriel Garcia Marquez or Cormac McCarthy, so I feel a little ill-equipped to accurately sum up this athlete’s brilliance. In lieu of that, here’s how I would rank Messi’s five-goal haul:


1. Roadrunner breakaway/chip-shot (A) (49th minute)
A lot of credit should go to Cesc Fabregas on this one, because of the perfectly timed and weighted lob. Helps when are you passing to the last living Jedi Knight, though.

2. Snapshot between four Leverkusen defenders (42nd minute)
There’s about a millisecond of time and six inches of space where this shot actually comes off, much less goes past Leverkusen’s doomed keeper. Messi finds both.

3. Roadrunner breakaway/chip-shot (B) (25th minute)
Notable mostly for the comedy pratfall on the part of the completely roasted Leverkusen defender who (perhaps unnecessarily) winds up tumbling into the net.

4. Mid-range shot (84th minute)
It’s a testament to Messi’s greatness that most any other football player would cite this shot as a career highlight. Here, it’s Leo’s fourth-best goal of the game.