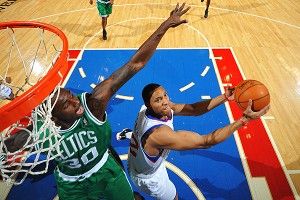 For the remainder of the NBA season, The Triangle will be breaking down the biggest games of the week. On Wednesday night, the Sixers, led by Evan Turner, demolished an exhausted Celtics team 103-71 in a battle for the Atlantic Division lead.

The division lead in the division no team seems to want to win. With the Knicks taking a nosedive, it appears Boston and Philadelphia will tussle over the Atlantic. The Celtics took a five-game winning streak into the Wells Fargo Center in scenic South Philadelphia, looking to pull even with the home team. For their part, the Sixers had seen the bloom decidedly come off the rose. One of the success stories of the early season, Philly came into the game having lost eight of its last 10.

You can argue about whether winning a division title, in this day and age, means anything to a team or that team’s fans, but there’s a little more at stake for Boston and Philly than just hanging a banner. Assuming Danny Ainge doesn’t go all Swedish Chef on the Celtics’ lineup, this will be the last run of the Big 3 (+1). They would like to start that run somewhere other than Miami.

For the Sixers, getting out of the first round of the playoffs would be another step in the development of Doug Collins’s team and provide some evidence that the exciting — if not entirely seamlessly assembled — core group of players should be kept together.

In the second quarter, Rajon Rondo tried to pull off a catch-and-shoot with the shot clock winding down. On a clear day, with no crosswind and the planets lining up exactly right, Rondo is not the best jump shooter. He clanked his shot off the upper left part of the backboard, missing the rim entirely and earning Boston a shot clock violation. Even better was the disdainful look Ray Allen gave him as the Celtics walked back up the court. Imagine Robert Frost watching Andrew Dice Clay perform nursery rhymes.

Second prize goes to Kevin Garnett, who blocked Jrue Holiday’s shot in the third quarter and screamed, “Get that shit out of here!” At the time, the Celtics were down 21.

Evan Turner. The former no. 2 overall pick scored a career-high 26 points, 16 of which he netted during a “I CAN HEAR JIMI! I’M IN THE ZONE!” run in the first half. It’s been an interesting week for Turner watchers (all seven of us). He’s weathered trade rumors as well as suggestions that he’s battling some kind of particular off-court issue that has led to his mediocre sophomore season. His move to the starting lineup, despite an atrocious night in Milwaukee, seems to have silenced the trade talk. And Turner, Collins, and the original source of the off-court-issue chatter have all downplayed, refuted, and recanted on the matter.

But maybe being the center of attention suits Turner. That certainly seems to be the case on the court, where he looked most comfortable with the ball in his hands, bringing it up even when Holiday, Philly’s gem of a point guard, was in the game.

The well-circulated clips of a giddy Turner briefly setting a Guinness World Record for behind-the-backboard shots; his affection for The Notebook; his generally amiable demeanor … Turner doesn’t particularly act like the win-or-jump-off-the-Ben Franklin Bridge kind of player that the Sixers so desperately need. But Wednesday was a glimpse at the multi-tool dynamo he can be. He was physical, out-muscling Rondo on defense and grabbing nine boards; he had vision, running the break and finding a raiding Andre Iguodala for an alley-oop; and he showed off an improved jumper, helping to stretch the Celtics defense.

He might not be a gladiator, but when he was on the court Wednesday night, the Sixers were +30. Maybe gladiators are overrated.

The game is over.

This was Philadelphia’s 19th double-digit victory. Following losses to Chicago and the Bucks by a combined nine points, many were bemoaning the team’s inability to close out tight games. Clearly, he said, removing his aviator sunglasses, these guys like to feast more than, um, famine. (Not my best Caruso, admittedly.)

Doc Rivers did what he could do, but he might have wanted to throw up a Thundercats signal for an optometrist at some point. I don’t know what was in the team meal before the game, but the Celts had some serious, collective depth-perception issues going on, shooting 35 percent from the field and going doughnuts-for-eight from behind the arc.

The Celtics were coming off back-to-back overtime victories (over the Knicks and Rockets). Seeing veterans like Garnett and Paul Pierce longingly gaze at the oxygen tank hidden behind the Gatorade cooler, Collins sent his young Sixers team out with a simple but effective game plan — run. They may not have a set hierarchy with which to eke out tight wins, but Philly is still one of the deepest teams in the league. If they get too far out in front, they are awfully hard to catch.

Evan Turner just might be worthy of a no. 2 overall pick. And the Celtics are going to have to bring their legs if they want to run with Philly, much less any other team.