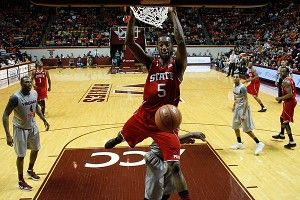 As the ACC tournament kicks off in Atlanta, two teams are in a dog fight for their NCAA tournament lives. The committee is notoriously mum about bubble teams in the week leading up to Selection Sunday, and nobody quite knows where NC State and Miami stand at the moment, but the consensus is that there’s work to be done for each. Without one or two wins this week, the pity and consolation of the NIT awaits.

And that’s not all they have in common. Both teams finished tied for fourth in the ACC with a 9-7 conference record. Both teams have first-year coaches — Mark Gottfried at NC State, Jim Larranaga at Miami. And both are enduring NCAA tournament droughts — three years and counting for Miami, five years for a State team recovering from the painful Sidney Lowe era.

Miami and NC State are both on the NCAA tournament bubble. How much have coaches and players been paying attention to the chatter?

“I know ESPN has us as the next four out, and CBS has us as the last four in. It’s just, I always want to see what people think. But I don’t think they’re part of the committee, so that’s their opinion.” —Miami’s Shane Larkin

“I think everyone goes online. If I had my choice, I’d put us in. I’m sure my family would put us in too, but unfortunately it doesn’t work like that.” —NC State’s Scott Wood

But the résumés of each team pose an interesting contrast. NC State earned its all-important 20th win in the final game of the regular season, and will probably get its 21st on Thursday against Boston College. In addition, it has the 26th-highest strength of schedule in the country. But despite the fact that Gottfried took care to schedule strong out-of-conference opponents, his team is still missing a signature win. The Wolfpack lost to Vanderbilt, Syracuse, Indiana, and Stanford, and came up with zero wins against the ACC big three — Duke, North Carolina, and Florida State.

Miami, on the other hand, has just 18 wins. An injury sidelined 6-foot-10 Miami center Reggie Johnson for the beginning of the season, and his recovery is ongoing. Senior guard Malcolm Grant also left the team for two weeks in December after a death in his family. As Larranaga noted several times, this is a team that came together late, and continues to discover its identity well into March. On the other hand, Miami beat Duke at Cameron Indoor Stadium, and notched another big win two weeks ago at home against Florida State. With players like Grant, Durand Scott, Johnson, and All-ACC third-team center Kenny Kadji, the Canes probably have more potential to go deep into the tournament.

But the differences become less clear-cut when you add this fact to the mix — NC State beat Miami in both meetings this year, including a tense four-point home victory in the last week of the regular season.

Wednesday’s shootaround was a relaxed affair for both teams. NC State finished its practice with a game of knockout, and Larranaga had Miami playing various shooting games the entire time. In a free throw shooting competition near the end, he split the team in half and watched as they heckled each other from either side of the court. The game went into overtime, and after a reserve missed his free throw, Kadji had a chance to sink one for the victory. “End this, homey!” Johnson shouted over and over, as the other team sprinted down the court to distract him. Kadji took a deep breath and nailed it.

“We wanted our players relaxed and comfortable on this court,” Larranaga said afterward. “Tomorrow night when we get here and it’s under game competition, they’ll have a good feel for the court and making shots because they’ve seen the ball go in over and over again.”

Gottfried and Larranaga are very different coaches, at least by disposition. Gottfried, 48, has the good looks and sharp demeanor that served him well as an ESPN analyst in his two years prior to coaching NC State. He’s unusually open with reporters, a trait that was on full display when he questioned the credentials of Virginia, a team that almost everyone assumes has an NCAA bid locked up.

“Look at Virginia,” he said. “They have the same conference record, 9-7, and no wins against the big three. Their non-conference strength of schedule is 223rd, ours is 21st. But when you look at the Internet brackets, they seem to be solidly in the field.” I asked him if the fact that Virginia had been ranked early on in the season was fooling voters. “We could’ve been ranked if I’d have scheduled the 223rd-hardest schedule,” he said. “We could’ve certainly been 13-2 or 14-1, but that’s not what the recipe was for getting into the tournament, so we made our schedule very difficult.”

If his team can get by Boston College, he’ll have a chance to prove the point against Virginia on Friday. And he wasn’t mincing words a bit later when asked about the difference between working as an analyst and a coach. “When I was doing TV, I relaxed all day,” he said. “I went to the spa, had a nice lunch. Now, coaching, I’m ready to throw up all day long. So it’s a lot different.”

The 62-year-old Larranaga, on the other hand, has a gentle, grandfatherly bearing, and more than a passing appearance to the actors Ed Begley Jr. and Jeffrey Tambor. (Look here and here.) During his post-practice interview, wearing a gray Miami sweatsuit, he referenced Stephen Covey’s book, The 7 Habits of Highly Effective People, and, when ESPN’s Jeannine Edwards mentioned that three of his players were in the top five among active ACC tournament scoring leaders, he spoke philosophically about that experience.

You can hear Larranaga’s Bronx background in his speech, a hard, booming voice that belies the relaxed appearance. He led George Mason to the Final Four in 2006, and joked that after years of playing Virginia Commonwealth in its home town during the CAA tournament, he thought those days were over. (Miami faces Georgia Tech, an Atlanta school, on Thursday.)

Johnson spoke of the transition from Frank Haith, the former Miami coach now at Missouri, to the man he calls “Coach L.”

“It was tough,” he said, “because they’re doing different defensive schemes. Coach L. is a scramble guy, Coach Haith is a zone guy. For guys to really know their assignments, it’s tough to catch onto, but we’re getting it.”

Johnson said he liked Larranaga’s scramble man-to-man defense, which places an emphasis on all four off-ball players being ready to help at a moment’s notice, better than the zone. “In the zone it’s hard because you have to go find your man, but here you have your man and you just have to block him out,” he said.

Johnson is the kind of player who can speak at length about rebounding, and dishes out little details like the fact that a ball shot from the wing is more likely to bounce to the other side of the floor than come back to the shooter’s side, or that the act of establishing position for an offensive rebound is a little like rushing the quarterback in football, with various evasive and power maneuvers. He says he’s still recovering from the meniscus injury in his right knee, but that every day he’s coming into “his groove,” recovering movement and stamina. Fatigue is still a factor in Johnson’s game, and he’s prone to fading late in games and getting in foul trouble when he loses his defensive discipline. But when he and Kadji are clicking, they’re on a level with Tyler Zeller and John Henson as the best big-man pair in the conference.

The Hurricanes can’t afford a loss to Georgia Tech, even after coming off their first winning record in the conference since they joined the ACC in 2005. (Haith managed an 8-8 record just once, in 2008.) Likewise, a hiccup against lowly Boston College would be deadly for NC State.

The Wolfpack’s success could well hinge on the shooting of 6-foot-6 NC State sharpshooter Scott Wood, who pulled a Hoosiers quote from his arsenal when asked whether it would be more difficult to shoot in an NBA venue like Philips Arena, the home of the Atlanta Hawks.

“They’re all the same,” he said. “The goal’s ten foot, the free throw line’s the same. They took my free throw streak [Wood’s streak of 66 straight, fourth-best in Division I history, ended against Georgia Tech in a rare 2-for-5 showing earlier this season], but hopefully I can keep the new one going tomorrow.”

But State will mostly be led by a pair of sophomores, C.J. Leslie and Lorenzo Brown. Leslie, a stringy 6-foot-8 slasher, is the team’s scoring leader with 14.8 points per game, and Brown is a point guard with the potential to be great and a penchant for inconsistency. He averages 12.5 points and 6.3 assists, and when he’s playing his best NC State is a team worthy of the tournament.

For Miami, lightning-quick freshman point guard Shane Larkin (son of former major leaguer Barry Larkin) is the only underclassman starter, and the diminutive 5-foot-11 freshman’s play could be the deciding factor in a potential second-round matchup against Florida State. He told me that since coming to Miami, he’s had to gain weight and strength (he went from 162 pounds to 171 since starting), and that while he used to “melt into screens,” he’s learning to fight through. Even his teammates, who rag on him for his youth, have come around.

“When I hit the free throws against Clemson [in a January 18 game Miami won by three], they said, ‘Oh, you just grew a pair tonight,'” he recalled, laughing. He said that they still make him carry their bags into the locker room, though.

The ACC tournament tips off today, and neither coach is willing to discuss what it might take to bring their programs to the NCAA tournament. “One game at a time” was the common refrain, repeated ad nauseam, but both seemed to understand they’re on the verge of an accomplishment nobody expected at the start of the season. I asked Gottfried whether he would have taken the 20-11 record and fourth place in the ACC if someone had offered it to him in November.

“Probably,” he said. “Yet I think what happens to all of us is that once you get going with your team, we’re all a bit greedy.”

Greedy or not, both coaches have brought their teams to Atlanta with a chance to have their cake and eat it, too.