Men on the Verge of a Nervous Breakdown: This year’s Tour de France 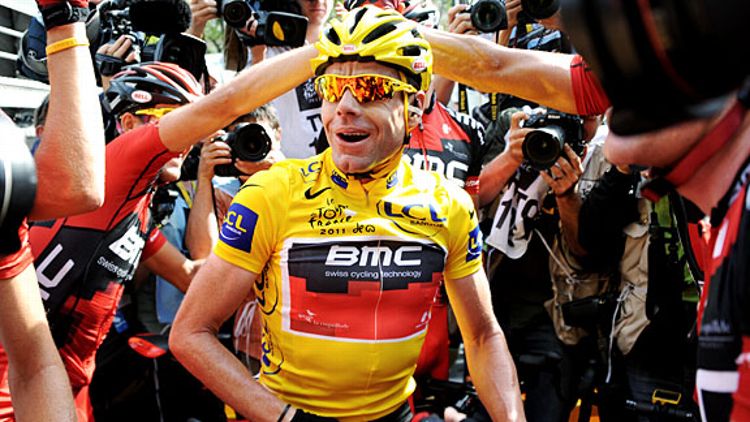 This year’s Tour de France was one of the most compelling sporting events I have ever watched from start to finish — there was never a clear-cut favorite to control the peloton, nor was there ever any certainty about who would come away with any of the jerseys.

Australian rider Cadel Evans won the Tour, instantly becoming the most successful Australian since Natalie Imbruglia. Evans rode consistently thru the early parts, limiting his losses in Alps. He never launched a pure attack, but did well to minimize losses to Andy Schleck, and won by taking back time on the final time trial.

Evans’ final time trial was one of many moments in this year’s Tour that will help define the careers of this generation’s cyclists. The sport ‘finally makes sense’ when you are able to emotionally identify with the physical and psychological journey that the riders endure over the Tour de France.

How did the riders fare in the race? More importantly, how did our image of them as riders change over this Tour?

Cadel Evans
Evans broke thru after about a decade of bad luck, inconsistent team support, and wavering psychological strength. Like with any other sport, you can see how ‘coming up short’ inspires a range of ’emotional’ media perception. This year, it seemed as if Evans had finally moved beyond the stages of disappointment. This was supposed to be ‘his time.’

Some of the questions directed at the tour winner seemed to be pursuing the angle that ‘because the sport of cycling has been cleaned up, the playing field has finally been leveled.’ It was refreshing to see how candid and reflective he was about his career path, but it was unfortunate to think about how a tainted sport can impact the individual legacy of a great rider. Fortunately, Evans seized his opportunity.

Alberto Contador
Whenever I watch Alberto Contador, I still see him as the villain who stole control of the Astana team from Lance Armstrong and sent him into retirement. That was back when I was an entry-level fan who just wanted to see Lance Armstrong as an invincible force. I begrudgingly appreciate Contador’s attacking skills on the mountain stages, and after seeing Andy Schleck lose the tour in the time trial, Contador does seem easier to retroactively accept as a complete rider.

For Contador, the Tour was a failure based on his high standards. Apparently, riding in the Giro d’Italia left him fatigued during the final mountain stages. With the psychological toll of doping allegations hanging over his head, winning the Tour de France was never going to be easy task. If anything, this loss probably humanized him, especially when he still fought ‘like a champion’ on L’Alpe d’Huez and the Grenoble time trial.

Andy Schleck
His breakaway during Stage 18 over the Galibier was easily the ‘ride of the tour,’ providing an emotional moment that showcased his mountain-climbing ability. The spirit of his ride was ‘old school.’ While his ability to suffer for so long deserves to be recognized, it was realistically the only way he had any chance to win the tour. His legs probably paid for it when the time trial rolled around.

Up until the final time trial, I thought Andy Schleck would have been the most deserving yellow jersey winner because of how he was branded as the most recent ‘guy who got screwed over by Alberto Contador.’ He sort of reminds me of Dirk Nowitzki. His time is probably coming, but after falling just short so many times, you start to wonder if he will lose his psychological edge.

Frank Schleck
Andy’s older brother always looked like he had the legs to challenge for the yellow jersey, but he was a ‘team player’ for Leopard Trek and always stayed back to follow the wheels of Evans and Contador when his brother attacked. I wonder if Frank would ever get his turn to be the team leader, because I’d like to see him empty his tank trying to beat his brother instead of working for him.

Even though they shared an ultimate broment on the podium in Paris, I sort of hope their relationship goes sour, Frank becomes the leader of another team, and they have a series of epic duels for years to come.

George Hincapie
George Hincapie rode in his 16th Tour de France. He deserves to be proud of the fact that he has been on the yellow jersey-winning team for the ninth time, which makes him the Robert Horry of cycling. Even though his skills might not be as strong as when he rode for Lance Armstrong, he is the ultimate ‘chemistry guy’ in cycling. On the day of the final time trial, Cadel Evans kept this veteran around to calm his nerves during his practice ride.

Mark Cavendish
The concept of the green jersey for the ‘best sprinter’ seems like it would really piss off the same guy who hates ties in soccer. “So you’re saying they hand out an award for someone who lets their team do all of the work for them, then they just sprint for the final moments of the race over the easiest parts of the course?”

Cavendish finally won his first green jersey. It must be nice to be considered the fastest biker in the world, but I’m sure it isn’t so nice to be accused of holding onto cars to get over mountain stages. Whether or not these rumors are true, they do tell us that everyone is gunning to take down Mark Cavendish.

Tyler Farrar
As an American, I am always rooting for Farrar to find a way to consistently beat Mark Cavendish, but you get the feeling that Cavendish’s HTC-Highroad team has one or two more premium lead-out men than Garmin-Cervelo.

Thomas Voeckler
One of the most powerful moments of the Tour was when Thomas Voeckler managed to hold onto the yellow jersey until the Galibier. No one expected him to last for so long, and you get the feeling that he discovered that he has more in his legs than he realized. It will be interesting to see if he continues to progress as a rider, or if he reached his ceiling.

Unless it was all just ‘the magic of the yellow jersey.’

Pierre Rolland
The winner of the white jersey for best young rider might have done the most work in the Tour, since he was responsible for dragging Thomas Voeckler thru the mountain stages for team Europcar. He won the ‘most famous’ mountain stage in the tour, L’Alpe d’Huez, so he will probably carry the expectations of the French on his shoulders for the next decade.

It was good to see a race for the white jersey now that Andy Schleck is no longer eligible.

Tom Danielson
As the highest-placing American in the Tour, I expect this first-time rider to get tons of buzz next year before the Tour starts. We will see him billed as ‘the next Lance Armstrong’ just because that is the only way to describe an American rider to the American public.

Alexandre Vinokourov, Andreas Kloden, & Bradley Wiggins
The Tour de France is unforgiving and dangerous. Even if you are a veteran or a podium contender, just one tricky mountain descent can end your tour, or even end your life. Although these three riders were forced to withdraw from the Tour, the final stages in the Alps would have been better with their presences.

Fabio Sabatini
This guy finished in last place, but when it comes to the Tour de France, even finishing the race deserves to be recognized. It’s not a Certificate of Participation for Tee Ball. Every rider suffered, and achieved varying results.

THE NFL LOCKOUT IS OVER.