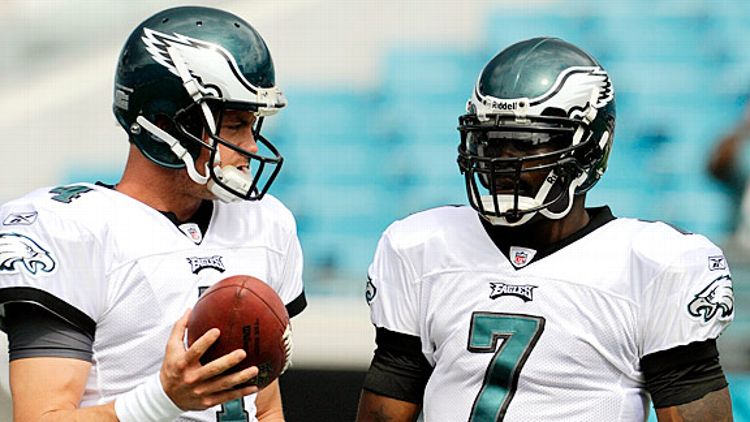 In 1945, facing an unwinnable football game against Army at Yankee Stadium, Michigan coach Fritz Crisler resorted to a desperate ploy: Utilizing the free substitution rule implemented due to the shortage of male bodies on campuses during World War II, he shuttled in a separate offense and a separate defense. His team lost 28-7, but his controversial tactic was considered a success. The next season, Army copied his idea, and by the mid-1960s two-platoon football became a permanently accepted practice, and one-platoon football became the quaint product of a bygone era. (When Stanford’s Owen Marecic played both fullback and linebacker last season, he came across as a Bronko Nagurski fanatic with a death wish.)

For all of its Neanderthal tendencies, football is as susceptible to evolution as anything else in American life. What seems like an inane gimmick may someday become conventional wisdom, which is why, if the Philadelphia Eagles really want to live on the edge, they shouldn’t trade Kevin Kolb to anyone. They should play him.

I have no doubt you can cite at a least a dozen reasons why a quarterback platoon would never work in the NFL, and especially in the cultural minefields of Philadelphia, where I’m sure they would have jeered Hanukkah Harry just as loudly if he’d subbed in for Santa that day. But the truth is, there’s no precedent. We don’t know what would happen. Several college teams have implemented platoon systems with varied success. The Browns considered platooning Jake Delhomme and Seneca Wallace early last year, but that still gave them only about 60 percent of an actual quarterback.

The situation in Philadelphia is unique. Michael Vick is the most explosive athlete in the game, but this means he is always one play from a gruesome career-ending injury; Kolb is solid passer with the potential for dramatic improvement. Vick is the starter; Vick should be the starter. But if we’ve accepted that running back is no longer a full-time position, why should quarterback be any different? The Eagles (presuming Kolb is not in Arizona by the time you read this sentence) have a luxury no other team does. Why shouldn’t Kolb start four to six games this season, depending on Vick’s physical health, the Eagles’ record, and the opponent’s defensive tendencies?

When it happened by accident for the Eagles last season — when Kolb got hurt, then Vick got hurt — the platoon worked surprisingly well (in the interest of full disclosure, I’m not the first person to float this idea; I believe I first heard it from Michael Wilbon on PTI). And I realize that it worked well because injuries eliminate the lingering political questions, but that’s the point. If Andy Reid did not coach as if his job were in constant jeopardy, if Vick and/or Kolb subsumed their egos, if Reid could convince their teammates and the media to at least approach it with open minds — wouldn’t this be the perfect forum for experimentation? If the season is a success, then this whole idea doesn’t seem so inane anymore. It seems like the future.

Two indelible memories from the summer of ’86: (a) Standing in the candy aisle of Graham’s newsstand in State College, Penn., sifting through cellophane packs of Topps cards in a desperate attempt to complete my set, and (b) purchasing a discounted Big Audio Dynamite cassette from Arboria records, on the assumption that acquiring anything with even a remote relationship to the Clash could not be ill-advised.

There is a thrill in collecting, in acquiring physical objects and yearning after those things you have yet to acquire. When it comes to music, Spotify is the first product I’ve come across that suffocates the idea of collecting music altogether, which is why I both love it and fear it. That summer, I wound up acquiring 618 of the 792 cards in the 1986 Topps set, and 23 Dan Gladden doubles; that summer, I wound up listening to that Big Audio Dynamite cassette over and over again in an attempt to convince myself it was worth the $3.99 I’d paid for it, while daydreaming of what it would be like to afford a copy of Sandinista! Now, a kid can afford whatever he wants, whenever he wants it, without even the hassle of sifting through bad links on Mediafire or the guilt of engaging in piracy. I would have loved Spotify in the summer of ’86; now that it’s here, I can’t get past the feeling that even if I’m not stealing, I’m still cheating myself.

4. Mary Murphy, judge, So You Think You Can Dance

As if it is not punishment enough that my wife monopolizes our third-rate DVR by recording three hours of this pablum each week, I am regularly subjected to the apoplectic wails of a woman whose primary qualification as a judge is that she was once a dance double for Julia Roberts. I would like to set the Hot Tamale Train afire, loose a family of hyenas inside, and drive it off a cliff into a lake filled with hydrofluoric acid.

Men on the Verge of a Nervous Breakdown: This year's Tour de France