Matt Kemp Will Be A Rich Man On A Mediocre Team 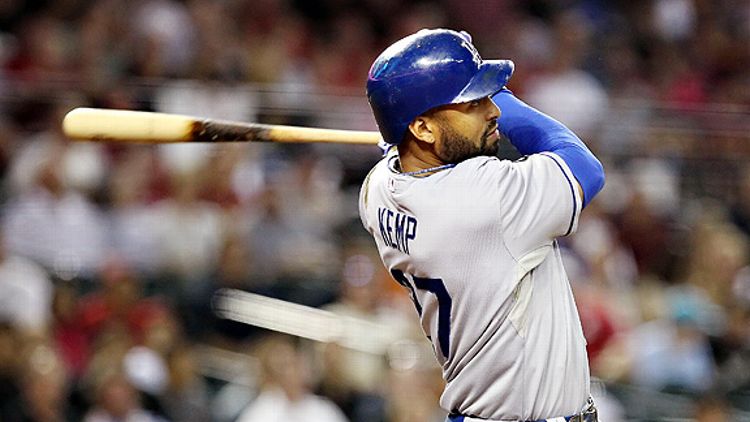 In a span of a few hours, news broke of two pending signings by the Dodgers. One pays $160 million for a defensively iffy center fielder coming off a career year who 12 months ago fell so far out of favor in L.A. that other teams started inquiring about possible trades. The other pays $8.76 million to a second baseman, filling one of the Dodgers’ biggest off-season vacancies.

The $160 million deal stands a good chance of working out. The $8.76 million deal is everything that’s wrong with the Dodgers. Everything not McCourt-related anyway.

Matt Kemp’s eight-year, $160 million deal marks the biggest contract in National League history, tied for the richest ever given to an outfielder with Manny Ramirez’s identical pact a decade ago in Boston. But it’s also right in line with other contracts recently given to top players.

The easiest comparison is Carl Crawford, who inked a seven-year, $142 million deal with the Red Sox last off-season. Kemp had one year of team control left before free agency. Eligible for arbitration, he stood to make something like $15-$16 million in 2012. Subtract that one year from his eight-year agreement and you have a contract nearly identical to Crawford’s. The past year has also seen Ryan Braun and Troy Tulowitzki agree to deals averaging about $20 million a year, in both cases extending existing deals and taking both players well into their would-be free agent seasons.

Kemp is two years younger now than Crawford was when he signed with Boston a year ago. Kemp and Braun were both 27 years old when their contracts were done, though in Braun’s case his team was getting a corner outfielder and not a player for center field, where finding the right blend of offense with capable defense is much tougher to find.

If we’re going to compare Kemp to Crawford, it’s only reasonable to ask if Kemp might be susceptible to the same kind of bust potential that plagued year one of Crawford’s time in Boston. In 2010, Kemp hit just .249/.310/.450, stole just 19 bases in 34 attempts, and played defense so poorly that he nearly broke UZR. Kemp admits he wasn’t entirely focused on baseball, his relationship with Rihanna and other distractions taking attention away from the game. He packed on weight and ended the year with people raising serious questions about his future.

In signing him now and not after last year’s buy-low opportunity, the Dodgers are investing at Kemp’s absolute peak. He’s a deserving MVP candidate after the season he just put up, hitting .324/.399/.586 in the tough hitter’s environment of Dodger Stadium, with 39 homers, 40 steals and a stellar .419 wOBA. He set a career high and led all National Leaguers with 8.7 Wins Above Replacement.

Questions remain about Kemp’s game. He doesn’t walk much, for starters. Though he added 21 walks this season, he also drew 20 more intentional walks in 2011 than in 2010, his batting eye effectively remaining the same. His defense is a little tougher to figure: He’s won two straight Gold Gloves, an honor no sane person believes he deserves. But depending on your metric of choice, Kemp could be considered a solidly below-average defensive center fielder or something better, average or even a tick above by some measures. Even if we grant the defensive benefit of the doubt for now, Kemp is listed at 6’3″, 215 pounds but plays above that size, and would seem a candidate to outgrow center field as he ages. That combined with some offensive downside risk means we shouldn’t expect many, if any more eight-win seasons.

The good news is Kemp doesn’t need to be that good, or even close, to justify this deal. The going rate for free agents sits at about $5 million per Win Above Replacement. If Kemp can be a four-win player for the foreseeable future, he’ll have earned out. Some examples of players who delivered about four wins of value in 2011 include Erick Aybar, Melky Cabrera, Peter Bourjos, Yunel Escobar, Cameron Maybin, and J.J. Hardy. Ruth and Gehrig these guys are not.

The Dodgers’ bigger problem is who Kemp will have around him in the lineup. Barring a sudden change in the way the team does business, the answer appears to be almost no one. The Dodgers may have been the most top-heavy offense in baseball in 2011, with Kemp the only player netting more than three wins of value. The guy who finished third, first baseman James Loney, was hitting .254 with four homers at the end of July, before a hot final two months salvaged what would have been another flaccid season. The Dodgers’ off-season signings of Rod Barajas and Juan Uribe predictably failed, and the team’s only pleasant offensive surprise was 37-year Jamey Carroll, a strong on-base threat in a lineup full of OBP sieves.

Carroll is now gone. In his stead, the Dodgers are signed former A’s and Rockies second baseman Mark Ellis to a two-year deal worth $8.76 million. Ellis was once a defensive wizard with moderate offensive skill, a package that made him a three- or four-win player in his prime. His BABIP-inflated 2010 season notwithstanding, those days seem long gone now, with Ellis coming off a season in which he hit just .248/.288/.346. He also missed 30 games, no surprise for a player who’s averaged 43 missed games a season over the past four years. Entering his age-35 season, his defense could start to atrophy, and his bat doesn’t figure to get much better.

Barring a shocking reversal that sees the Dodgers open the vault for Albert Pujols or Prince Fielder while in the midst of McCourt’s contentious bankruptcy and a likely regime change, the team’s infield next season could conceivably look like this:

C A.J. Ellis — Has hit a total of eight home runs in the minor and major leagues combined over the past four years.

SS Dee Gordon — High BABIP saved his rookie season, but zero homers and a 3% walk rate mean he needs to hit .300 simply to not suck.

3B Juan Uribe — Hit .204/.264/.293 in 2011, which would have been the worst line for any qualified third baseman in baseball…but Uribe couldn’t stay healthy either, a common occurrence in every one of the past four seasons except 2010…the one that prompted the Dodgers to gift him with a three-year, $21 million deal.

Sub in veteran journeyman Juan Rivera at first if you like. This is still a woefully thin team behind Kemp, Clayton Kershaw, Andre Ethier when healthy, and a couple of dynamic relievers. Eight years is a long time, the NL West seems to be weak and winnable almost every year, and the Dodgers could bring in some real help at some point in the future. But for now, Kemp figures to toil away on a mediocre team, making gobs of money while watching his teammates vie for the out-making championship of the universe.

The Comedifan: Not Just the Funny Guy in Your Section