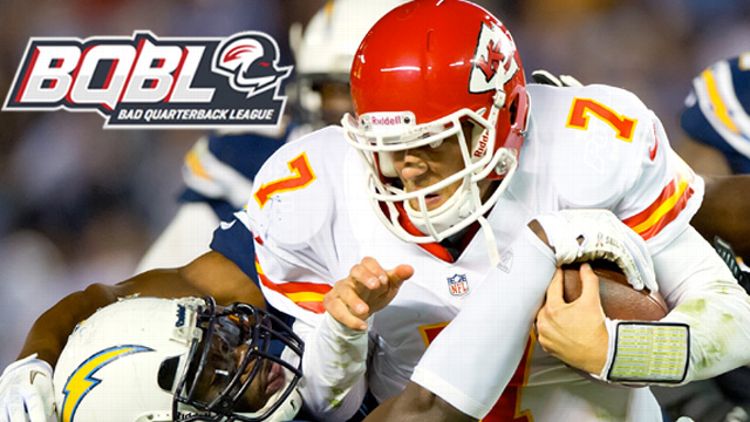 With all the rookie quarterbacks going from dorm rooms to film rooms this season, there was so much potential for the marvelous missteps we have come to expect and celebrate here at BQBL headquarters. If you told me during the preseason that in Week 9, Andrew Luck and Ryan Tannehill would face off and combine for 723 passing yards, I would have corrected you: “I think you mean BQBL points.” The idea that neither of these men threw an interception baffles me to the point that I still have to check the box score even though I already know it as fact. With all these rookies playing unpredictably well (I have a spot waiting for you on the BQBL Summer Jam Screen, Brandon Weeden), it is nice to know that you can always rely on guys like Matt Cassel to turn the game over in the fourth quarter. Matt Cassel is the Kraft Mac and Cheese of BQBL quarterbacks — consistently horrible yet undeniably enjoyable.

Chiefs (Matt Cassel), 66 points: Cassel really filled the BQBL box score in Week 9. He threw for under 200 yards, he fumbled, he TAINTed, and he FARTed. Don’t worry, I’ll explain. Cassel’s day turned on two key plays in the fourth quarter separated by just two minutes of time on the clock. In those two minutes, Cassel went from “Hey they’re only down 11, maybe he can bring them back to win it” to “Hey, if he gets benched here, he will break 100 BQBL points.” Let’s take a closer look at these two plays:

The FART (10:46 left in the fourth): Before we get into specifics about this play, let’s define a FART. A few weeks back I tried to come up with an acronym for fumbles that were returned for touchdowns. I couldn’t come up with anything. Somehow, someone reached out to me via Twitter, or to Bill via e-mail, and said that his girlfriend suggested FART (Fumble And Returned Touchdown). I just went through Twitter and my inbox and couldn’t find the guy’s name, but his girlfriend definitely deserves a shout-out. Anyway, this particular FART was interesting because of the string of poor decisions that Matty C made as the play progressed. Here they are in order:

1. Play action? In your own end zone? Fine, I get what you are trying to do here, but if you are going to run play action in your own end zone, you better sell it better than that.
2. When the pressure is on him, he turns his back to the rushing defenders and his receivers.
3. He runs to his left. Does he really think that he can stop, throw across his body, and complete a pass before he gets demolished by an oncoming defender?
4. He sprints away from said defenders with no understanding of Newton’s Laws of Motion. The defenders are in motion. He is not. This is not a footrace he is going to win without a five-yard head start.
5. After the FART is completed, he makes the “I’m upset so I am going to eat my own lips face.”

The TAINT (8:46 left in the fourth): The TAINT was a different story. It was interesting because of the string of good decisions that Matty C made as the play progressed. Here they are in order:

1. The previous two plays, he had completed two short passes for moderate gains.
2. Instead of going deep, he made the right read and dumped it off to a check-down over the middle.
3. He made a good pass leading the receiver into open space.
4. He made an honest effort to take down the ballcarrier on his way to the end zone. We really appreciate that here at the BQBL.
5. After the TAINT is completed, he makes the “I’m upset so I am going to eat my own lips face.”

I always knew that one day I would make fart jokes for a living. I’m glad to have finally realized that dream.

Vikings (Christian Ponder), 50 points: I love Joe Webb. I watch Vikings games rooting for Ponder to do imbecilic things with the football every down just to up the chances that I will get to see the greatest blue-training-bag-thingy jumper in the history of the NFL in action. The thing is, there are only so many imbecilic things a man can do with the football when his main function is handing the ball to Adrian Peterson. The first touchdown drive of the game, Ponder didn’t throw a single pass; he just handed it to Peterson and turned cheerleader. If you account for sacks, Ponder led the Vikings to 44 yards on passing plays. The interception that he threw was intended for Percy Harvin deep down the sideline. Not only was the pass awfulistic because it was thrown where only the defender could catch it, but Harvin had run out of bounds, making him ineligible even if he could catch it. I swear, the only reason they keep starting Ponder every week is because they look at each other and say, “Well, he DOES look like a young Kurt Warner, so maybe he will develop into an old Kurt Warner.” I respect that logic, but how many blue-training-bag thingies can Ponder jump over? Exactly.

Giants (Eli Manning), 34 points: The last time Eli Manning threw for fewer yards than he did Sunday was December 28, 2008. He completed only 42 percent of his passes, threw for only 125 yards, threw a pick, and had Patriot fans everywhere saying, “Where was this Eli Manning in the Super Bowl?” The ESPN stat-nerd squad thinks the Giants’ loss has a lot to do with the fact that Peyton’s younger brother only completed two of his 11 passes thrown more than 10 yards downfield. I think the Giants’ loss has everything to do with the fact that they were playing in New Jersey against a running back named Redman. Believe who you want.

Titans (Matt Hasselbeck), 31 points: If you are a starting quarterback and you see the Bears on the schedule, just call out sick or something. For real. Hasselbeck was dominated by the Bears defense, but I don’t even want to recognize that. All I want to talk about is his tackle attempt on Brian Urlacher. Urlacher’s body language as he approached said, “Not only am I not afraid of you tackling me, I am looking forward to it.” Hasselbeck dove to the ground, a good two yards before Urlacher even got to him, and then swung his legs out like a scorpion trying to sting someone with its tail. Not cool, Matt Hasselbeck. Not cool.

Browns (Brandon Weeden), 26 points: Brandon Weeden is bad and everything, but he leaves so much unrealized BQBL talent on the table. The only thing more disappointing in the BQBL this year than Weeden’s performance has been the fact that there hasn’t been any scoring for penis pictures on a blog. Come on, Weeden. I see two birds; you have one stone. Just sayin’.

You're Allowed to Hate the Thunder Now