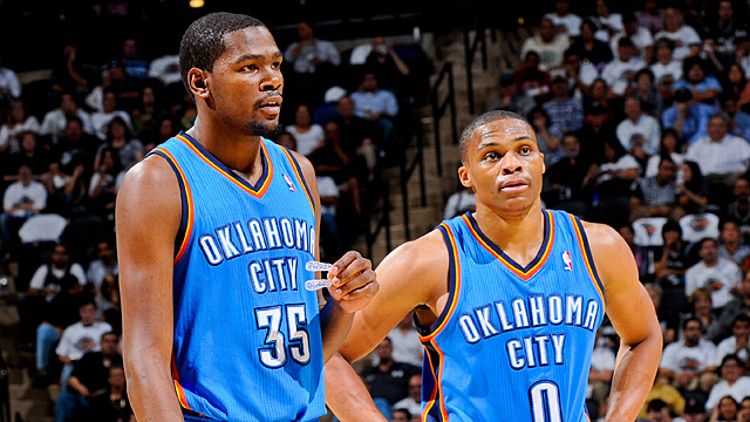 During Sunday night’s game against Atlanta, Russell Westbrook and Thabo Sefolosha of the Oklahoma City Thunder finished the first quarter by barking at each other on the sidelines until their teammates squired them to opposite corners of the huddle. It was an ugly scene in an ugly loss. Despite a Gemstar-sharp performance by new acquisition Kevin Martin, the Thunder were selfish, exasperated, and disjointed.

With two losses in their first three games, the defending Western Conference champs have not resembled the glowing dynamo that engulfed opponents in blue flames last season. And it was impossible to forget that the Hawks, who were win-less and without star forward Josh Smith, were the same club that James Harden disemboweled with a 45-point outburst only a few days earlier.

These are marvelous times.

For about three seasons, the Thunder have been America’s most beloved sports team. Rooting against them, which no one ever did, would have been the equivalent of kicking a dolphin. Seriously, what kind of horrible monster doesn’t want to see gentle Kevin Durant smile?

And yet here we are. When the Thunder slumped off their hushed home floor with shoulders bowed, it was beautiful. And when Tony Parker left Westbrook confused in the wilderness and drained a game-winning jumper for the Spurs on opening night, it was sublime. What kind of foul necromancy could be afoot when joy is derived from witnessing the dreary, timeworn Spurs beat the precocious Thunder? It felt a bit like reading 1984 and cheering for Big Brother and the Ministry of Love.

But you’re finally allowed to hate the Thunder. It’s OK. After the franchise jettisoned Harden in a move that emphasized profits ahead of chemistry or winning or anything to do with basketball, we have been given the rare opportunity to reevaluate whether Oklahoma City deserves our allegiance. Let’s call this the Harden Schism.

For those who claim that Harden should have accepted underpayment out of loyalty to his billionaire employers, the Thunder’s success will be proof that no stupid sixth man deserves the kind of contract earned by young superstars like Roy Hibbert, Brook Lopez, and Eric Gordon. But if you believe the trade was a cynical, foolhardy, greedy act that deprived fans of watching a fantastic young triad elevate a team to Xanadu, Oklahoma City has to suffer its comeuppance.

The Thunder must lose.

See, a franchise as venerable as the Knicks can afford to let Jeremy Lin walk without mass defections. They already share memories of Bernard King, Charles Smith, and Van Gundy leg-locks. But Oklahoma City has no treasured history and few real fans. The only people outside of Oklahoma City with emotional attachment to the team are seething Sonics devotees with abandonment issues — but no one associates Detlef Schrempf’s bristly coiffure with the franchise in Oklahoma City anyway.

As outrageously talented children, the Thunder were easy to love. Even when their celebration of individualism teetered on the brink of selfishness, it was a beautiful-but-flawed refutation of the militaristic polish found in places like San Antonio. Turnovers and silly shot selections were an unavoidable byproduct of the power being produced.

Year by year, their winning percentage rose from hellish to heavenly: .280, .610, .671, .712. For hoops junkies enamored by the franchise during the formative period, it’s been like watching an idea scribbled on a damp cocktail napkin blossom into America’s No. 1 Supplier of Bacon-Flavored Snuggies. When Durant wept on his mother’s shoulder following the Thunder’s elimination at the hands of bullying LeBron James, we as humans all leaked brackish eye-juice with him. Forgotten in the heartache of obliteration was that the Thunder were initially favored to win that series.

Just as we empathized with Durant in the tunnel, we’re now supposed to feel compassion for Oklahoma City because they’re a small-market team that was cleaved apart by unfair financial conditions. In this heart-wrenching narrative, a plucky franchise simply can’t compete with teams in megalopolises that have powerful television stations.

Yes, there are economic realities that helped to ferry almost every notable free agent into Los Angeles and New York over the past offseason. Yes, the Lakers’ new television contract is why they can cough up exorbitant luxury taxes to maintain a payroll $15 million higher than any other team. But the Thunder’s ownership moved the team here. Seattle was the 14th-largest media market; Oklahoma City is 45th. Such chutzpah would be like bitching about the humidity while vacationing in the rain forest — if not for the fact that the team reportedly made over $35 million in profits last season.

As it stands, a franchise that went to the Finals dealt a foundational 23-year-old player for a temporary replacement, a rookie, and draft picks. Even the pundits who insist that Presti secured a princely haul no longer believe the Thunder will win a title this year. It was not a moment for rebuilding. We shouldn’t celebrate a team that opted to hacksaw the head off their carousel horse when the brass ring was dangling in front of them.

So far, the void left by Harden’s departure is yawning. Martin, his replacement as the sixth-man shooting guard, has scored effectively and notched a few assists, but does’t provide that same calming, coagulating presence. Harden is a scorer, but a patient and probing one. He takes open 3s or drives to the bucket, and when he’s anywhere in between, he looks to find teammates. When the Thunder ran their fabled pin-down play for Durant, it was usually Harden who ensured that he got the ball at the top of the key. But against Atlanta, the Thunder appeared to have regressed to the sloppy one-on-one ball that characterized the team before Harden’s emergence. Westbrook hucked up 18 shots and made five of them. Although Durant had eight assists, he was responsible for six of the team’s 21 turnovers.

The Thunder are still very good and should be able to work out the kinks. But they’re less scary, less exuberant, less lovable. Instead of seeing Harden’s goofy facial shrubbery and fish-eye gaze, television viewers are treated to more shots of Perkins’s surly mug and Westbrook’s bonehead struggle-face. They chose to keep those two guys instead of re-signing the player who is averaging 35 points, six rebounds, and six assists per game. Remember that forever.

While trading Harden shredded the hokey, family-first, feel-good image that characterized the Thunder, it also turns them from a cartoonish façade into a real franchise. Organizations make mistakes, piss fans off, and get taunted for losing games. Rooting for the Thunder to reap the whirlwind from the Harden trade will be fantastically entertaining. And if you’re a fan of the team, you should embrace the newfound negativity, too — winning is much more fun when it makes someone else mad.