Mark Richt, the Carousel, and the Difficult-to-Define ‘It’ Factor 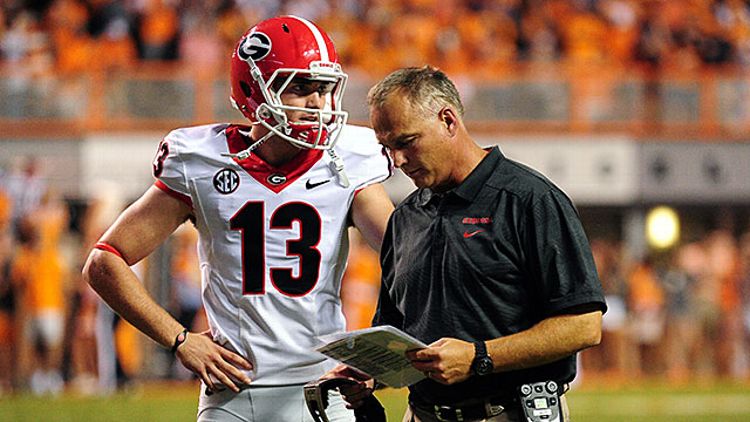 As head coach of the Georgia Bulldogs, Mark Richt has spent 13 years giving the Bulldog faithful an average of 10 good reasons for his continued tenure and three rationales for his ouster that often seem far more compelling. He perennially appears on the coaching hot seat lists while different names tell the same story: He can’t win The Big One, though that can mean either the Cocktail Party, the SEC championship, or the national championship. He can’t beat UGA’s archrival, which could be Florida, South Carolina, or Auburn. He lets the doormats stick around and, eventually, they get lucky and steal one. And it’s not like basketball season will rain revenge on Kentucky or Vanderbilt.

This season, Georgia boasted an absurd, near Pac-12 style offense featuring inevitable all-time SEC passing leader Aaron Murray at quarterback, an unfair underclassman halfback surplus in Todd Gurley and Keith Marshall, and a wealth of receiving options. And sure, the defense lost a ton of NFL talent, but the team could simply outscore anyone, particularly the Stone Age offenses Florida and South Carolina were putting out there. Besides, you started to hear whispers about how Jarvis Jones was overrated, Justin Houston played out of control, and Alec Ogletree, Cornelius Washington, and Bacarri Rambo were replaceable. And hey, look how that schedule plays out — LSU and South Carolina at home, no Texas A&M or Alabama, at least until the SEC championship, and that seemed all but assured.

Instead, Georgia ends the season barely ranked, at 8-4, with the “4” comprising a Richt Royal Sampler — including a close loss to Clemson and getting run off the field by Missouri (not Texas A&M, but that other Big 12 carpetbagger). And then, well … you can’t let Vanderbilt stick around like that. We won’t even get into what happened against Auburn, but as pointed out quite nicely by UGA’s A.J. McDonald, Chris Davis was good. Ricardo Louis was lucky.

That took talent. The one against us was bullshit

The casual fan’s ability to likewise differentiate between “good” and “lucky” has resulted in 2013 saving Mark Richt’s job, if not Mark Richt saving his own job. Previously, there was an underlying, uncomfortable feeling that the churchgoing, humble, even-keeled Richt simply wasn’t built for the new realities of the SEC, and fans wished he were more along the lines of Saban, Miles, Spurrier, Meyer, someone, well … kinda satanic. The truth is, he bought himself time the only way most coaches can: by proving he’s not God.

There are some coaches who either cannot get it done on the recruiting trail or who can but fail to translate it into meaningful results. You have coaches who may be good at the “CEO” aspects of the job, but whose  X’s and O’s acumen might make them a target of Bill Barnwell’s Thank You for Not Coaching. Then you have the type of coach whose impact on the program has stricken it with a certain malaise that a “Belk Bowl or bust” ultimatum won’t fix. Those are all happening at Virginia right now, FWIW.

But for Richt, well … sometimes the unmistakable difference between the controllable “good” and the uncontrollable “lucky” can be so blunt as to stun even an SEC fan base into a state of reflective reasonability. I was shocked that Georgia was even in a position to possibly win the SEC championship back in 2012, considering how Eddie Lacy was mauling them in the second half. But ever since that fateful, last-second completion, Georgia has appeared to be supernaturally star-crossed in a way most people associate with only the most cursed pro teams.

Look at this list of names: Aaron Murray, Keith Marshall, Michael Bennett, Malcolm Mitchell, Justin Scott-Wesley. That could be a healthy chunk of the All-SEC team. Instead, those are the players who suffered significant injuries during the 2013 season, the worst of all obviously being Murray, the SEC’s all-time passing leader who went down with the most Georgia-in-2013 injury of all, tearing his ACL in the middle of a 59-17 win on Senior Day. This doesn’t change the significant flaws of this Georgia team, all of which were exposed as the depth chart got thinner: The defense was maddeningly inconsistent, the offensive play calling either too reliant on Murray or not enough; the list goes on. But it’s not like the NFL, where you can throw money at an offseason problem (unless you’re Oklahoma State … ALLEGEDLY). A rare recruit might provide an immediate impact, but when a college team bottoms out, hiring a new head coach is rarely the panacea many hope for. It’s more like drafting a quarterback in the first round — nailing it gives you at least a five-year honeymoon period. Getting it wrong will cost jobs, millions of dollars, and maybe even a decade of momentum.

Perhaps that’s become more obvious. A larger shift may be occurring, where “it” is less of a qualification or even a demand for a new head coach. “It” is almost always granted retroactively, and it’s what separates Mark Dantonio from John L. Smith, Dabo Swinney from Tommy Bowden, Kevin Sumlin from Dennis Franchione — in other words, that intangible that can get a school from one level to the next, seven wins to a New Year’s bowl, New Year’s bowl to a BCS bid, etc. Mark Richt has done all of these things, and yet he doesn’t have “it.”

Until you think about who had “it” when similar programs had coaching vacancies. Will Muschamp was the coach-in-waiting for a guy who would soon lose “it” at Texas, and he has now stewarded the only losing season at Florida in more than three decades, bottoming out with a loss to Georgia Southern (and not even one of the good Georgia Southern teams). Yes, the Gators suffered more injuries than Georgia, and we might never know what kind of shape Urban Meyer truly left the school in, but Muschamp’s prickly media presence is the exact opposite of Richt’s. The same goes for Brady Hoke, who like Muschamp inherited a marquee program in disarray — a $2,000 bag with no cash in the purse, as Kanye put it. And though he caught a couple of tough breaks, he criticized the Michigan fan base as “fickle” and tied his fate quite literally to that of Al Borges, who is essentially the Big Ten’s answer to Brent Pease. Then there was Bo Pelini, who like Richt suffered through an 8-4 season marked by crippling injuries (and fairly miraculous wins), but forfeited any sympathy by licking shots at Tommie Frazier, cursing out Nebraska fans, and essentially announcing after the Iowa game, “You can’t fire me because I don’t quit.” There’s a reason these guys are called “embattled”: It’s a lot easier to remember what a dick Dana Holgorsen was to Bill Stewart now that West Virginia doesn’t have Geno Smith and Tavon Austin.

In fact, you look at the guys who weathered the tough times and had banner 2013s, they’re all unified by a homespun sense of humility — Jerry Kill, Kirk Ferentz, David Cutcliffe, Steve Addazio, Gary Pinkel (OK, Pinkel always seemed like kind of a dick), and of course, Gus Malzahn.

And so, this offseason may be one of the “cheaper to keep her” philosophy — Muschamp, London, Pelini, Brown, and Hoke all seem to be safe for the time being. Partially because they’ve in some way “earned” another shot or are too expensive to fire, and more because when you look at the alternatives, “it” doesn’t exist. Jim Mora Jr. didn’t have “it” until it became obvious that he did. The opposite is true for Steve Sarkisian. Mike Leach is proving “it” might be similar to a bar membership, where most states don’t honor reciprocity; what works in Texas might be wholly unsuited for Washington, so buyer beware if you’re looking to back up the Brink’s truck for Art Briles.

For every Gus Malzahn, who proves beyond all attempted refutation that you can’t micromanage divine intervention, there were the usual mid-major quick fixes that monkey-wrenched everything in a hurry: Sonny Dykes, Darrell Hazell, and Dave Doeren have a combined zero conference wins between them. What about Pete Lembo or Tim DeRuyter makes you so damn sure they have “it”? And as for the trendy coordinators, Chad Morris can’t bring Tajh Boyd with him. Same with Kirby Smart, someone Georgia fans surely make googly eyes at when they see the Bulldogs allowing 40 points. Mike Bobo is considered a hot prospect as well, and … just ask a Georgia fan if they’d let him manage a pizza party, let alone a BCS program.

Perhaps the bigger picture is that you can’t buy luck, but you can earn respect by handling yourself more like a leader of men than a prophet. Jim Mora Jr. declined to make wisecracks about USC’s crime rate after beating the Trojans two years in a row. Mike Gundy is The Man rather than A Man. Randy Edsall doesn’t have to be a total jerkwad about recruits since they aren’t looking to jump ship as much and, besides, the guy took it in stride when he had to start a linebacker at quarterback last year. So that’s why the “MARK RICHT HAS LOST CONTROL OF” meme has had a tough 2013. You can’t lose control if you never really have it in a meaningful way.