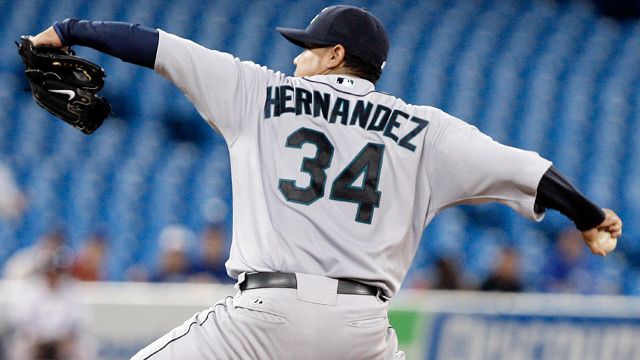 The Seattle Mariners are on the verge of signing Felix Hernandez to a seven-year, $175 million contract, locking up the team’s franchise player through his prime, setting a new standard for pitcher contracts, and opening the door for a new round of bonanza deals for three other aces.

Hernandez would’ve made $39.5 million over the final two years of his existing contract, effectively making the new deal a five-year, $135.5 million extension. It’s a huge gamble for a Mariners team that now figures to pay one pitcher about 30 percent of its total payroll this season. It’s also a huge win for Mariners fans tired of seeing superstars leave for greener pastures.

We hold up players like Cal Ripken, Tony Gwynn, and Craig Biggio as ideals, Hall of Fame–caliber players who stay with one team for their entire careers. That sentiment whitewashes some negatives, such as Ripken and Biggio playing past the point of usefulness to chase career milestones, hurting their ballclubs in the process (on the field, anyway). Still, most fans will gladly live with a couple of unproductive golden years, if it means getting to see their favorite player through his peak, and a little beyond.

Too often, Mariners fans have been deprived of that opportunity. Yes, they were fortunate enough to see Edgar Martinez retire where he started. But all-timers like Alex Rodriguez (free agency), Randy Johnson (pre-free-agency trade), and Ken Griffey Jr. (send-me-to-Cincinnati trade) all left at or near the height of their powers. For years, the M’s were a cash cow organization, fielding a bunch of great teams soon after the opening of Safeco Field, then leveraging new, overseas revenue streams, thanks to the popularity of Ichiro Suzuki. Those days feel like ancient history now. The Mariners have finished below .500 in seven of the past nine seasons. Attendance has fallen way off the levels seen in Safeco’s glory days. There’s a sense among many fans that the team isn’t just losing; it’s perpetually rebuilding, chasing five-year plans that lead nowhere.

Baseball isn’t basketball, where signing one superstar can instantly turn a losing team into a winner. But locking up King Felix through 2019 gives the team a sense of credibility, reassures fans that a total teardown isn’t happening, and lets management get on with the business of developing premium, homegrown players, the kind of cost-controlled talent that can make carrying a $25-million-a-year pitcher more financially palatable. And on a visceral level, it’s great to see a mid-market team ante up for its best player instead of hurtling into a fire sale. Mariners fans have been in the tank for Felix since he was destroying hitters as a teenager in the minors, all the way through to his signature moment last summer. Now, if their man plays out his contract in Seattle, they get seven more years of memories, and a solid 12 minutes free of New York media trolling.

Putting fan reactions and off-field implications aside, will Felix be worth it? That’s a trickier question.

Dan Szymborski’s ZiPS projection system sees the deal as more or less exactly nailing Hernandez’s market value, figuring Felix as about a five-win pitcher now, and a four-win pitcher by the end of the deal. One could argue that this valuation is a bit aggressive, since Felix wasn’t actually due to hit the open market for two more years. Of course, you could also argue that Szymborski pegging the value of a win on the open market at $5 million is conservative, given this winter’s signings, and that a projected salary inflation rate of 5 percent per year might also be a little light, given historical trends, as well as the flood of new TV money inundating the sport.

Of course, we don’t want to go too far down the rabbit hole of projections, lest the conversation become entirely hypothetical. So let’s dig into some numbers.

First, Hernandez is an innings-eater of the highest order. Over the past four years, he’s tossed more innings than any other pitcher, topping Justin Verlander by ⅓ of an inning. Per ESPN Stats & Info, King Felix holds another innings title, too. Among active pitchers, here are the most innings pitched through their age-26 season:

(It’s important to note that with King Felix, he has at least 190 IP in each of last seven seasons.)

Your natural inclination would be to say that this is a good thing. Hernandez’s health record is squeaky clean, and he’s been as good a bet as anyone in the game to take the ball every fifth day. But carrying a heavy load from a young age can go the other way, too. Query all the pitchers of the post-expansion era to throw as many innings by age 26 as King Felix did, and you get eight names, Hernandez’s included. That list includes Hall of Famers Bert Blyleven and Catfish Hunter. But it also includes some crash-and-burn cases, most notably Fernando Valenzuela and Dwight Gooden — the latter of whom flamed out for reasons that went beyond an overworked arm, granted (hat-tip to Ben Kabak for the search parameters).

What if we use the same time frame, this time screening for pitchers with the most Wins Above Replacement by age 26 — a measure of both playing time and skill? Here again, Blyleven leads the pack, only this time we get some of the best pitchers of all time joining the ranks, including Roger Clemens, Tom Seaver, Greg Maddux, and Pedro Martinez. We still get a mixed bag, with pitchers like Frank Tanana, Larry Dierker, and Vida Blue failing to live up to their early promise, whether due to injuries or just the general attrition and erosion of skills that can strike even the most promising arms.

So what do we know about Felix to this point? He’s a pitcher who’s shown remarkably consistent performance, striking out nearly a batter an inning, posting strikeout-to-walk rates between three- and four-to-one, and ground-ball rates near 50 percent in each of the past four years — a more reliable sign of steady performance than his ERAs, which have ticked up from 2009 and 2010 levels almost entirely because of worsening luck on balls in play. On the other hand, Hernandez has also lost about three miles per hour off the mid-90s heater he threw at the start of his career. That’s a fairly typical trend for pitchers, and the best ones find new ways to get batters out as they get older, much as Felix has. Then there are the external factors. Management decided to move the fences in for the 2013 season, meaning we could see a few Hernandez warning-track outs of years past land for doubles, triples, or homers in Safeco’s new configuration. Felix would likely benefit from having a pitch-framing master like Jose Molina behind the plate; instead, he has the defensively-rough-around-the-edges Jesus Montero likely to get a clean shot at a regular catching gig. These and scads of subtler variables could affect how Hernandez’s deal works out for the M’s. The much larger threat is that, like so many before him, Hernandez succumbs to injuries and ineffectiveness that even the sharpest baseball minds and doctors couldn’t have seen coming. Because he’s a pitcher, and that’s just what happens to pitchers.

While the Mariners work to graduate Taijuan Walker, James Paxton, and Danny Hultzen to the rotation alongside Felix, get Nick Franklin and other hitting prospects up to the majors to fortify the lineup, and coax better performances out of young major leaguers like Montero and Dustin Ackley, the broader implication for Hernandez’s contract will be how it affects the market for other elite pitchers. Starting next year, every team will rake in an extra $25 million a year from the new national TV contract alone, to say nothing of the more lucrative local TV deals that have improved many teams’ fortunes. When teams like the Reds are spending $300 million to retain the right side of their infield, and the Mariners are paying more money to a pitcher than any team ever has before, we can only imagine how much Justin Verlander, David Price, and Clayton Kershaw figure to make from their next deals.

Verlander turns 30 this month, but he also owns the most impressive track record, meaning he could score the most money on a per-year basis, if not necessarily an absolute basis. Price expressed his shock over the Felix deal on Twitter, and it’s a mortal lock that the team that hands him his own Monopoly money won’t be the Rays, meaning he’ll either get re-signed to a megadeal by whichever team trades for him in the next year or two, or he’ll hit the lottery if he waits until free agency to cash in. As for Kershaw, he’s the youngest of the three, and a Dodger. If Brandon League warrants a three-year, $22.5 million deal, Kershaw’s got a shot at all the money in the universe … or at least the first $200 million deal ever given to a pitcher.