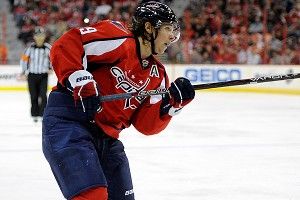 The third star: Mike Gillis
Just as the Washington Capitals are reaching rock bottom thanks to surprisingly terrible goaltending, Vancouver’s GM randomly shows up to take in a game on a “scouting trip” (even though the Canucks won’t play any Eastern Conference teams during the regular season). Predictably, everyone freaks out and starts churning out “Roberto Luongo–to–Washington” rumors, which both teams immediately deny. That’s some high-level GM trolling by Gillis right there. I can’t wait until he shows up in Toronto and spends the whole game shining a laser pointer in Dave Nonis’s eyes.

The second star: Max Pacioretty
The Habs winger underwent emergency surgery to remove his appendix last Saturday, sidelining him for three to four weeks. Showing he hadn’t lost his sense of humor, he made a funny joke about returning to the lineup eight days later that was hilarious because he — wait, he what? Really? Oh. Wow.

The first star: Mike Smith’s hair
How bad does your haircut have to be for you to become known as “the hockey player with the bad hair”? This bad. 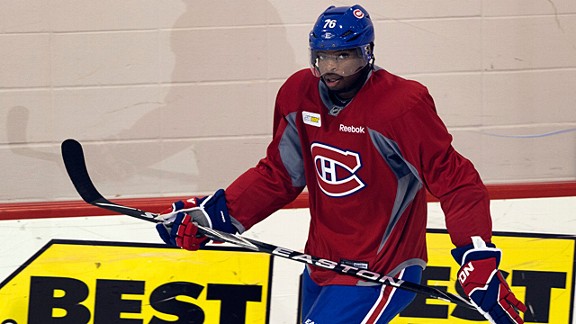 The outrage: Where to even begin with this guy? Complaints about Subban’s attitude have been around for years, but they’ve really taken off over the last month. First, he missed the season’s opening weeks in a selfish contract dispute. Then when he did sign, his own teammates didn’t seem all that glad to see him. And on top of all that, his coach had to make a point of banning his patented “triple low five” victory celebration. Who even has a patented victory celebration? No wonder everyone in the league hates him.

Is it justified? Hockey fans, this is why we can’t have nice things.

Subban’s “contract dispute” wasn’t a holdout — he was a restricted free agent without a deal in place, mostly because the Habs were playing hardball. And it ended when he accepted a contract for far less than he’d been demanding. As for his teammates not liking him, even the normally feisty Montreal media pushed back on those reports.

And as for the triple low five … I mean, go back and watch this. Really? This is what passes for an over-the-top celebration in the NHL? I’ve seen football players celebrate more vigorously after getting their chin straps fastened properly, but we need to declare a state of hockey emergency over a few hand slaps? (And let’s also take a minute to point out the contradiction in being simultaneously criticized for “not being liked by his teammates” and “celebrating too happily with his teammates.”)

But it appears Subban continues to commit the one unforgivable sin in the hockey world: having an actual personality. He’s exciting to watch, he’s good on TV, and sometimes he smiles and seems like he enjoys his job. This just cannot stand.

Look, I’m a Leafs fan, and P.K. Subban is a star player on the Montreal Canadiens. That means I want to hate him. I need to hate him. Hating him is practically embedded in my DNA. But I can’t do it. This guy is fantastic, and I can’t wait until the day the Canadiens run him out of town. I hope he triple-low-fives after every one of his new team’s wins in Montreal. 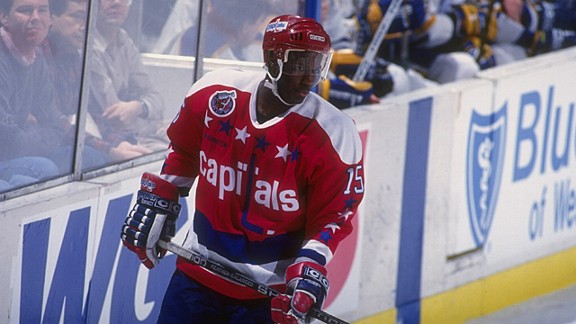 This week’s obscure player is Reggie Savage, a forward who played with the Capitals and Nordiques in the early ’90s. He was a first-round pick who never really panned out, only playing in parts of three NHL seasons before spending a decade kicking around the minor leagues and Europe.

Here are the two things every hockey fan needs to know about Reggie Savage:

I mean, it’s not even close, is it? “Reggie Savage”? That sounds like the final boss from an early-’90s Super Nintendo game. He’s like the perfect mixture of Reggie Jackson and Randy Savage, except he got the cool combination instead of the one that makes you a permanent American Idol judge.

I’m not sure what he’s doing these days, but I hope he’s renting out his name. I’d pay big bucks to spend one day being legally known as “Reggie Savage.”

This week’s debate: Is a two-goal lead really the worst lead in hockey?

In favor: Of course it is! Every hockey fan knows this.

In favor: How can you say that? Anyone who’s ever watched a hockey game knows the two-goal lead is the worst lead in hockey, because every announcer keeps bringing it up.

In favor: OK smart guy, what lead would you say is worse?

Opposed: The one-goal lead is worse than a two-goal lead, because — you might want to sit down for this part — “one” is a smaller number than “two.”

In favor: Whoa there. Slow down, Mr. Fancy-Stats!

In favor: See, here’s the thing: When you have a one-goal lead, you know you have to crack down defensively. And when it’s three goals, then you pretty much know you’re going to win. But when it’s a two-goal lead, you’re kind of caught in the middle, because you’re not sure whether to play defensively or relax. That’s what makes it so difficult.

Opposed: [Patiently …] So if you have a two-goal lead, what’s the worst-case scenario for what happens next?

In favor: Well, you end up pushing a little bit too much on offense, you have a defensive lapse, and you give up a goal.

Opposed: At which point the lead becomes …

Opposed: No, go ahead and do the math, we’ll wait.

In favor: Half of a two-goal lead.

Opposed: I hate you.

In favor: Do you have a point?

In favor: Dude, are you OK?

Opposed: [Takes a hit from an asthma inhaler.]

The final verdict: You know what, let’s all agree to keep saying this just to make the people who understand math really angry. 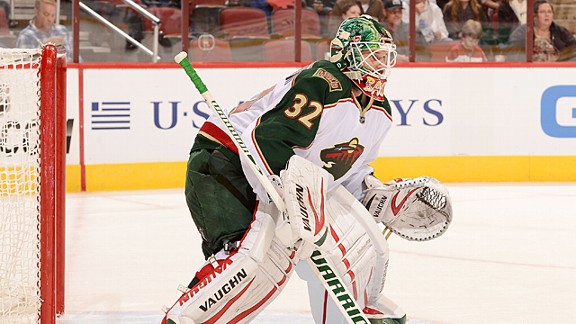 There are too many Nicklas Backstroms in the NHL.

There’s no reason that a center for the Washington Capitals and a goaltender for the Minnesota Wild should have the same name. I know there are a lot of hockey players out there, but it’s not like we’ve run out of names and need to start doubling up. It’s confusing, and it’s inconvenient for people who have to write about hockey while also being lazy and not very smart (i.e., me).

And yes, I realize the goalie is technically “Niklas” not “Nicklas.” That difference is too subtle and it doesn’t help. We need a better solution: Effective immediately, I’m revoking both guys’ Nicklas privileges.

First of all, according to Wikipedia, Washington’s Backstrom isn’t even a real Nicklas. It’s his middle name. What kind of shenanigans are you trying to pull here, Lars?

Goalie Backstrom is older so he should probably get to keep being Niklas, but just to be safe we’re going to change his name, too. Sorry for any inconvenience, Oskar Backstrom, and thanks for understanding.

So there we have it. As of today, the Capitals center is Lars Backstrom and the Wild goalie is Oskar Backstrom. Problem solved. No need to thank me.

Now if you’ll excuse me, I have to go yell at the Petr Sykora. 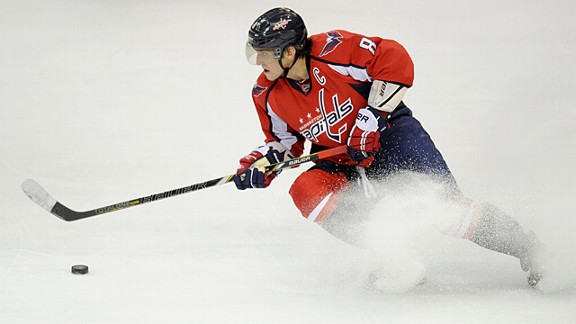 CapGeek.com, or, as hockey fans call it for short, “the greatest website in the entire world” (note to self: That abbreviation is five times longer than the site’s actual name and probably needs some work), launched a new feature this week and it’s just a cavalcade of tears.

The new “cap recapture calculator” is a useful tool because it allows hockey fans to figure out how much cap space teams will lose if a player on a front-loaded contract retires early (while also reinforcing the fact the new rule doesn’t make sense).

But the best part is that the tool only allows you to select players who are on long-term front-loaded deals. Which means that it produces the most depressing dropdown list in the history of website interfaces.

Seriously, just go here and click on the “select player” box. Read those names. Ovechkin, Luongo, Weber, Lecavalier, Parise, Richards x 2 … it’s all your favorite cap-killing contracts in one handy list. It’s like a walk through a graveyard of horrible ideas. Johan Franzen still has seven more years left? Marc Savard is still listed as an active player? Oh god, I forgot about Rick DiPietro’s contract somebody hold me …

I don’t know if a dropdown list can actually be considered a page, but I don’t care. It’s the most depressing CapGeek page of the week, and probably of all time.

Don Cherry didn’t really do anything especially interesting this week.

Nope. He made his usual good points on Coach’s Corner. He appeared on various radio stations to talk about the local team. And he updated his Twitter account with several interesting observations about the world around him.

Nothing out of the ordinary. Just seven consecutive days of good, solid NHL analysis.

So … nothing to see here. Sorry, Cherry fans. Maybe next week.

[Checks to make sure Don Cherry and his legal representatives have stopped reading.]

OK everyone, quick, meet me in the next section!

Ladies and gentlemen, I give you “Rock ’em Sock ’em Techno.”

I’ve had all the lyrics to this song memorized for 20 years but I’m not sure what color my wife’s eyes are, in case you were wondering.