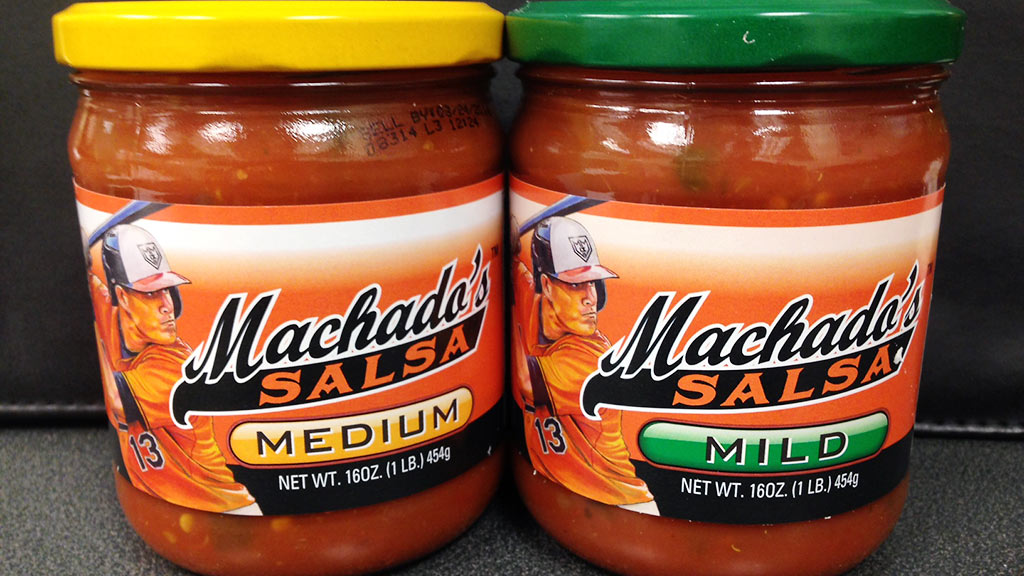 Manny Machado celebrated his 22nd birthday the day after a situational television comedy called Seinfeld turned 25. Then, the day after that, Machado collected five hits against the Washington Nationals, a career high. These two sentences are about nothing. Actually, all of this is about salsa.

Did you know that Machado has his own line of salsas? Did you know that salsa was the no. 1 condiment in America until mayonnaise staged a recent coup? I will forever know this to be true because one of my dear friends reenacts, reflexively and without fail, the mythopoeic scene from Seinfeld’s 43rd episode upon any utterance of “salsa.” It’s the scene that officially branded Seinfeld as the “show about nothing”; it’s the scene that came close to ruining the word “salsa.”

The “Mexican sauce” industry hauls in more than a billion dollars a year, and salsa and picante sauce (commercial salsa without the preserved chunks of jalapeño, onion, and tomato suspended in the cornstarched tomato-puree base) make up nearly $900 million of that total. Border relations remain a contentious subject, but “Mexican sauces” have fully assimilated and have since mutated into a distinctly American breed. Given baseball’s present-day landscape, there’s a compelling argument that picante sauce is more American than America’s pastime.

Sometimes, though, salsa and baseball mix. I ordered Machado’s Salsa a few hours after a particularly miserable outing from Machado in Tampa on May 8, exactly a month before the Baltimore third baseman’s weekend meltdown against Oakland that led to a five-game suspension. If that timeline seems a bit off, it’s because the official unveiling of Machado’s Salsa didn’t happen until June 24. His press event conveniently took place during the period in which he was looking to appeal the decision, hoping to knock a game or two off his punishment. I’m not saying, I’m just saying …

Machado was the picture of innocence during the unveiling, wearing a polka-dotted button-up under a blazer and standing at a podium in front of a salad bar at a Giant supermarket in Pikesville, Maryland. He was shilling for his mild and medium salsas, having nixed the idea for a hot variety because he didn’t think people would like it. Mild is his personal favorite. That admission would’ve been incredibly disappointing if it weren’t also unassailable proof of his natural temperament. Immature? Sure. But Machado is not a hothead. Hot is, evidently, the last thing in his head. He’s biochemically averse.

Machado claimed to be humbled by having his likeness printed on the label of a salsa jar. Maybe not as humbled as he might’ve been had he unveiled, say, Machado’s Baltimore Oreos (the creme would obviously be lemon stick–flavored), but he was going for Aw, shucks humble, not My god, this is who I am now humble, and he nailed it.

Machado served the full five-game suspension anyway, but his subsequent hot streak (he’s hit .400 since his return) has brought him to equilibrium; his season numbers more or less fall right in line with his career averages. For the first time all season, it’s good to be Manny Machado. But how good are his salsas? 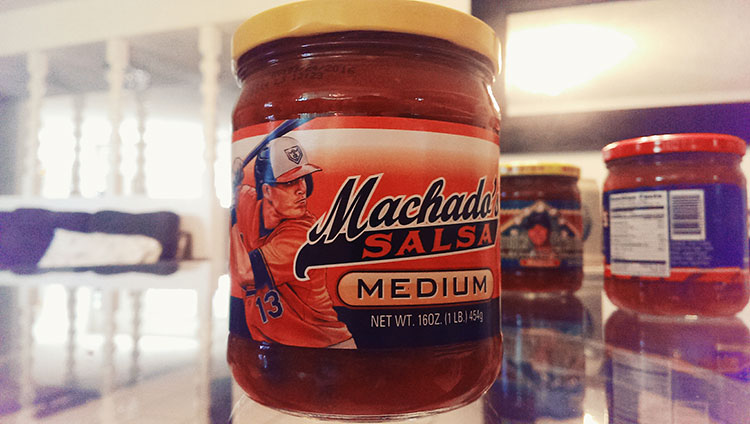 To overcomplicate what should’ve been a basic and immediate value judgment, I conducted a taste test of Machado’s Salsa and a couple of other slugger-endorsed salsas while using Pace chunky salsa as the baseline. To properly convey how the endorsed salsas compare to Pace, I devised a completely subjective and arbitrary metric called Pace-Adjusted Rating, which determines the quality of ready-made, jarred salsas. PAR is measured on a 10-point scale, with 5.0 being the numeric valuation of the Pace salsa baseline, 0.0 being “This isn’t salsa, this is chemical warfare,” and 10.0 being “This has never existed and will never exist.” Here are the results:

This is Machado’s favorite salsa. I brought it along with me on a desert expedition in June, thinking mild heat exhaustion might help me appreciate the mild flavor. That wasn’t the case. The mild salsa tastes of tomato, and very little else. Each green speck creates a ripple of hope that variety is just one bite away, but that tease only ever proves to be a diced bell pepper. I briefly flirted with the idea of adding water to the jar and concocting a kind of makeshift gazpacho, but I thought better of wasting our precious water.

Asking for consistency in life is asking too much; I get that. But why is this medium salsa drastically less viscous than the mild variety? The medium tastes better than the mild, and every once in a while a stray jalapeño seed surfaces, which is reassuring. Unfortunately, the strange consistency has trickle-down effects that are more psychologically troubling than anything else. Again, this salsa tastes fine. But due to the thinner base, I noticed the chunks more. The peppers and onions are all cooked to a certain temperature and slightly pickled from the acidity of the tomatoes and vinegar. There’s a strange film around the chunks, and they’re slightly gummy. Those issues wouldn’t be as detectable in a thicker, chunkier salsa. That said, my friends and I finished the jar in one sitting, so it clearly didn’t bother us that much.

Quick trivia: American historians didn’t know what to make of the use of chili peppers in pre-Columbian Mexico. It was assumed that chiles were largely used by the poor. Historians with an Americentric culinary perspective largely thought of the chile as a way to numb themselves to their terrible diet. It turned out that chiles were a luxury reserved for the social elite in Mexico. There is something essential to the piquant element that those without a rooted chili pepper culture can easily misinterpret.

That was the problem with Miguel Cabrera’s salsa. It came the closest of all the salsas to replicating the best aspects of Pace, except for one fatal flaw: It conflated the idea of additional heat with sensory overload. This is a pretty good salsa for a second … until the salt content leaves you blind. The kick isn’t from the extra diced jalapeño; it’s from the parasol-toting Morton Salt girl dropping you with a roundhouse. America’s chile culture has come a long way, but gaffes like this reflect its nascency relative to the rest of the world. Oh, what squandered potential.

Of all the athlete-endorsed foodstuffs I’ve taste-tested, Dustin Pedroia’s Premium Black Bean and Corn Salsa best captures its athlete’s essence. It makes sense: What could capture Pedroia’s essence better than capturing the essence of his hometown of Woodland, California, the hub of Yolo County? Yolo apparently dominates California’s titanic canned tomato market, so of course Pedroia’s salsa would be the best. You wouldn’t expect it from the strangest salsa variety of the lot, just like you wouldn’t expect a 5-foot-8 second baseman to be an MVP.

My initial foray was marked with trepidation. Jarred salsa is so ubiquitous because you more or less know exactly what you’re getting; it’s a comfort food. The bits of black bean and corn did not comfort me, and I had no idea what to expect from this salsa, which seemed to go out of its way to find a layer of exoticism. Despite my reservations, I dove in, channeling the spirit of Yolo. And I’m glad I did. I think it’s the cumin that makes it all come together.