Butter, Bacon, and Bone Broth: A Week on the Lakers Diet 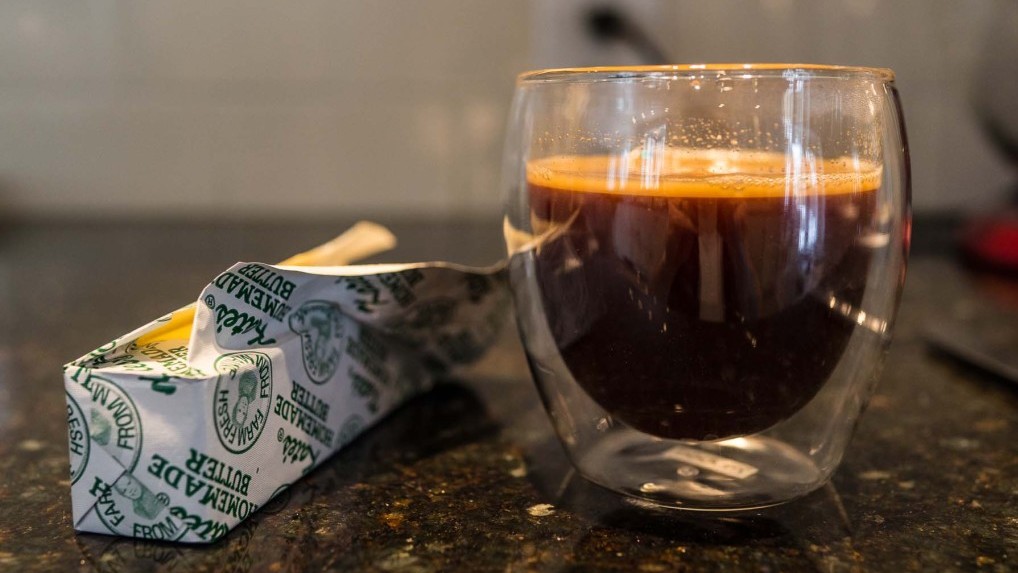 I flashed a devious grin as my second steak of the day hissed and crackled on the cast-iron skillet. No steak I have ever seared was treated the way I was going to treat this one. I flipped the steak, now sporting a nice, hard dark-brown crust, and plopped a pat of butter on it. I took a step back and watched it slowly melt away with that same sickening grin on my face. Once the solids faded from view, I flipped the steak again, and repeated the process. This was wrong. New Year’s resolutions are supposed to be torturous affairs, aiming to break you down before building you back up into a better person. They inevitably fizzle out because you never ever really get over the torture — and what is “better” anyway? This. This was better. There was no shame, no guilt, no regret. I was liberated from all of that. This was for health. This was for science. This was for a better me. This was for the Lakers.

Last month, CBS Sports’ Ken Berger launched an excellent series of articles on nutrition in the NBA, kicking it off with a deep dive into the nutrition program the Lakers have implemented over the last two seasons. Extolling the virtues of eating well isn’t a brand-new concept for NBA teams, but the specific guidelines the Lakers follow made the story a hit.

What makes the Laker diet special? Fats. Good fats. Lots of them. So much of them. Like, “they practically freebase them,” says Berger.

The nutrition program, designed by Dr. Cate Shanahan and implemented by Lakers strength and conditioning coach “Grass-fed” Tim DiFrancesco, places a heavy emphasis on good fats because, according to the two, it’s the most efficient source of energy for the body. From an interview with DiFrancesco last July: “Contrary to what people might think, we actually want our players to eat as much grass fed butter and bacon as we can get into them.”

Another pillar in the Lakers’ diet is bone broth (marrow bones and bones from cartilage-rich areas like joints and knuckles simmered in water with aromatics for 12-plus hours), which helps fortify the tendons and ligaments. It’s Kobe-approved.

So that’s what I did. Following those three tenets (butter, bacon, bone broth), I designed a diet based on the Lakers’ PRO Nutrition plan to follow for a week into the new year. For the project, I purchased about four pounds of beef bones (marrow and knuckle bones) from grass-fed cows, two and a half pounds of sugar-free and nitrate-free bacon, assorted cuts of grass-fed beef, and several packages of pastured butter. Yes, it was expensive.

To heighten whatever placebo effect I’d incur, I spent the weekend before the initial start date on a McDonald’s binge (double cheeseburgers, several boxes of 20-piece Chicken McNuggets) and sleeping crooked in armchairs to exacerbate any knee pain I’d experience in the morning.

The Triangle editors were concerned for my health, and rightfully so. This diet was designed for professional athletes at the peak of physical fitness, not for editorial assistants who don’t exercise nearly enough and use asthma as an excuse. But as I was researching the diet to make sure this was a good idea, I stumbled upon a few words from Dr. Shanahan that let me know this was something I was meant to do:

“Forget the idea that you’re not an athlete. You are.”

Day 1: I Promise I Will Never Stop Boiling

Day 1 begins some time around 2 a.m. on January 1, with me ditching my friends at a New Year’s Eve party. I stumble into my house with a strange sense of purpose. I have to make the bone broth, and I have to do it right then and there.

It is recommended that the bones be browned in the oven first to release some of that flavor via the Maillard reaction, but I don’t really have the time, or the mental faculties at this point. I give a bundle of carrots, a head of celery, and handful of shallots some rough chops; after 12 hours, it’s all going to be strained out anyway. Everything gets thrown into a cauldron of cold water. Dr. Shanahan’s bone broth instruction video advises adding some acid to the concoction, as it helps draw out the essential components from the bones, so I pour in the remnants of an open bottle of red wine I had on the counter. I turn the heat to the absolute lowest and sleep on the living room couch a few feet away, just in case something catches fire. Let it simmer at a low heat until the bones have nothing left to offer you. What’s the big deal about bone broth? Dr. Shanahan says these bones have compounds called glycosaminoglycans, which you won’t be able to find in anything else you eat. Apparently, this stuff is so essential to our bodies, it deserves its own group on the food pyramid. The glycosaminoglycan in these bones, according to Dr. Shanahan, “literally has an effect like a growth hormone that people inject themselves with.” (A revised Kobe System reads: “First you get a swimming pool full of bone broth, then you dive in it.”) If you’ve been a pampering dog owner, your dog is likely eating better, and feeling better, than you do — but you knew that.

The rest of my day is spent watching the Rose Parade while nursing my hangover, watching Before Sunrise, and eating several servings of scrambled eggs and bacon. Though I let the pot continue to simmer, I begin serving myself bowls of broth at around 3 p.m. The Rich Homie Quan Rose Bowl performance comes on in the living room, and I walk in with two cups feeling like the man of the year.

I took a required public speaking course my first semester of college. My speech was on bacon, and it was apparently so emotionally resonant, the professor dedicated two whole sessions to breaking it down for the entire class. The biggest advice I have for those kinds of classes is: Find a topic you’re passionate about. Everything else falls into place.

I have a B.L.T. salad for lunch, which is a B.L.T. without the suffocating limitations of two slices of bread. The slab of presliced bacon (convenient, but also a bit of a bummer) I purchased contains no sugar, falling in line with the no-processed-sugar policy of the diet.

Going without sugars hasn’t been too difficult so far (granted, it’s been a day). I keep a cannister by my bed. The label reads “Archer Farms Chunky Chocolate Indulgent Snack Mix (includes popcorn, pretzels & potato chips), made with real butter.” It’s all of those things, trapped in a hardened butterscotch ectoplasm, turning everything into one unruly cluster of terror. I polished off half of the can on Christmas Day trying to stay awake for all the NBA games. So far, I haven’t lusted for it once. The dreams have started. Last night I dreamt I was in a health documentary, walking down an aisle at a supermarket, pushing everything off the shelves and onto the floor, explaining the evils that lie within these “food” products. It was a strange aisle. Oreos were right next to Fruitopias in the refrigerated section. Does Fruitopia still exist?

My unconscious is pretty amped about this healthy lifestyle change. This is Bulletproof coffee. It’s black coffee blended with pats of butter, and little else. The dude who trademarked “Bulletproof coffee” adds MCT oil (a modified coconut oil that promotes metabolism); the Lakers add heavy cream to theirs, according to Berger’s article. I blend it straight. Get like me, Willie Green.

It’s good, as long as you know exactly what you’re drinking — and it’s hard not to, considering there are only three ingredients. It will likely be the richest, creamiest coffee you’ve had. The butter hits you up front. You taste the fat, and if you’re using a good (UNSALTED) butter, it should impart a mild, nearly imperceptible sweetness. It finishes smooth. Since the recommended serving size is only a cup, it’s not exactly going to weigh you down. The richness is a transitory experience. Just prepare for butter burps.

Day 5: Never Forget — This Is a Sacrifice These days I’ve really taken a liking to cauliflower. It’s nutritious and versatile. Here, I have it prepared simply: oil, a spoonful of hot curry powder, and cauliflower florets, sautéed until done, but still crisp. It’s paired with hanger steak.

Kendall Marshall had 17 assists against the Denver Nuggets tonight in his second start of the season. Since I’ve started drinking Bulletproof coffee (I made a test batch on New Year’s Eve), Marshall has averaged about 36 minutes a game. While different Lakers players adhere to the PRO Nutrition system to varying degrees, I can assure you Kendall Marshall has not taken to this diet. Maybe it’s a good thing. Look at the rest of that roster.

Save the butter for your Twitter handle, Kendall. Let me be the martyr. Allow me to diet in your stead so that you may prosper. Thrive, @KButter5. Thrive!

Day 6: I’m Close to Having My Asian Card Revoked

It’s been smooth sailing for much of this week, but I’ve really struggled with the lack of carbs in this diet. I can’t imagine how the transition would be for professional athletes, many of whom have pregame rituals that involve eating huge bowls of pasta. Going from having at least two bowls of rice a day to cutting it out nearly completely has given my body a bit of a shock. I have noticed I’ve stayed sated for longer with all the grass-fed meats and butters, which has eliminated the need for carbs. Still, it’s weird not shoveling rice down the gullet.

I have a few pieces of bread today to go with my beef stew. I fall into a coma almost immediately after eating. I do a quick Google search. This appears to be a normal occurrence.

Day 7 and Beyond: Last Call

On the last day, I realize I’ve ignored a very important food category in the Lakers’ nutritional program: organ meats! I have a plate of liver and onions (with a mound of bacon on top), a dish that was more or less ubiquitous on my visit to Chicago years ago, but nowhere to be seen here in Los Angeles.

After seven days, I can’t say I feel like a new person. After seven days, I’ve started to worry that my body is a temple so vandalized, no amount of butter, bacon, and bone broth could restore it to its former glory. It’s also ridiculous to expect a world of change in seven days. But a promising sign is, despite my editors’ concerns, I don’t feel any worse. I won’t be continuing the diet (grass-fed beef is expensive), but I’ve already internalized some of diet’s broader lessons: I’ll continue to avoid processed sugars*, eat more vegetables, and stop using vegetable oils like canola and corn oil.

Maybe I’m just not that attuned to how my body is supposed to feel, because I can’t exactly argue with results. I’ve lost four pounds since New Year’s Day.

*Update: My parents brought home foreign chocolates from a recent trip to Germany. I caved. I was feeling so good about not eating sugar, too. Resolutions are hard.