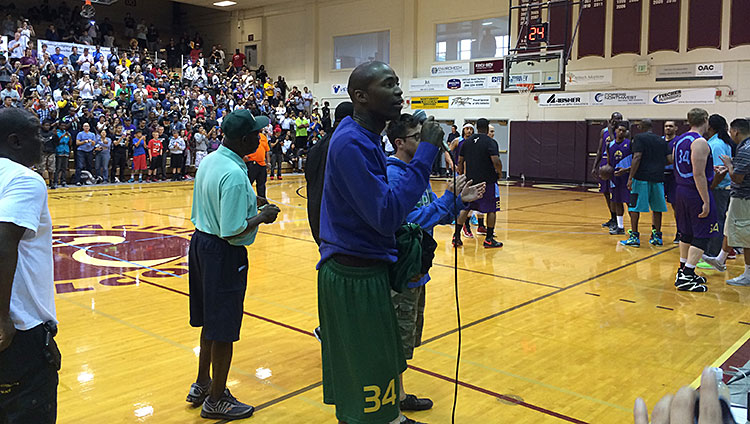 On July 20, in the lobby of the the Royal Brougham Pavilion, on the campus of Seattle Pacific University, a T-shirt vendor began to set up shop. One design read “Back to Seattle” in the form of the Back to the Future logo. Another had “Let’s party like it’s 1979” printed on it. Inside the 2,650-seat arena, Pam Friends, a 41-year-old lifetime Seattle SuperSonics fan, nestled into a seat in the first row behind the scorer’s table alongside her son. “I bring my kids. Every game we can come to, we’re here,” Friends said. “It’s just a great environment.” Little did the boy know, he was 40 minutes and six feet away from witnessing the best basketball played in Seattle since 2008.

The Seattle Pro-Am originated as the All Hoop, No Hype league in 1996. It was started by then NBA veteran Doug Christie. Soon after its formation, a local high school standout found himself playing on Christie’s team. That standout would go on to win two NBA Sixth Man of the Year Awards.

Jamal Crawford, like Christie, attended Rainier Beach High School in southeast Seattle. In 2006, Christie passed the torch as owner of Seattle’s premier summer league. “When I was 16, he took me under his wing, and it was a natural transition with him retiring and getting a little bit older,” Crawford said. “He said, ‘I think it’ll be in good hands with you leading.’”

Just eight years later, Crawford has developed the league into a must-visit basketball spectacle in the Pacific Northwest, reigniting the passions of a city. Under Crawford’s watch, the Pro-Am, which runs from early June to late August, has served as a platform for local talent and a magnet for some big names. But he didn’t do it alone.

Rashaad Powell, 33, has been the Pro-Am’s commissioner since 2009. When he was a kid, he ran the scorer’s clock; now he runs the league. “I’ve grown up in the Seattle Pro-Am,” Powell said. “My dad coaches, and I was always on both sides of the fence, seeing the behind-the-scenes of how the leagues are run and what goes into that as well as a player.”

Crawford and Powell, who have known each other since high school, shared a vision of what the league could be and what they wanted it to represent. “It was a very small operation,” Powell recalled of the league when he began working with Crawford in 2009. “When I set out to do this, it wasn’t to make this league be the best, most commercial thing. It was just, I’m doing this with some friends of mine who play basketball professionally and I want to give them something they can come back and do in the summertime — hone and sharpen their skills in a competitive and safe environment with other players at their high level.”

Crawford remembers the early days of the Pro-Am as nomadic. “We were switching gyms so much,” he said. “One week it would be at a high school in Rainier Beach, then we’d be at Rainier Vista, then we’d be at South Sound gym, then we’d be at Renton Community Center. So we switched around and it was tough for us to keep a fan base, but once Rashaad came up with the great idea to move it here, we had a home base.”

The move to Seattle Pacific University gave the league a platform, and Crawford’s colleagues in the NBA began taking notice. The area’s homegrown NBA talents — Isaiah Thomas, Spencer Hawes, Tony Wroten Jr., and Nate Robinson, to name a few — were already regulars in the league. However, in recent year the likes of Kevin Durant, Kyrie Irving, Blake Griffin, Jeff Green, Tyreke Evans, and LaMarcus Aldridge have put on exhibitions at the Pro-Am.

“I think the level of competition has definitely increased,” said Crawford.

Other NBA players have made appearances this summer, but the biggest splash came July 20, on a damp Sunday afternoon when Crawford brought in Kobe Bryant and Seattle SuperSonics legend Gary Payton to attend some of the day’s games. To no surprise, Crawford’s tweet announcing his special guests a few hours before the games turned an already-packed Royal Brougham Pavilion into an impenetrable heap of basketball junkies, and Bryant’s arrival turned an enthused crowd into a hysterical mob.

For all the star power, the league is ultimately about the community. Kids 17 and under get in for free, and all the league’s proceeds go to the Jamal Crawford Foundation. The real aim, however, isn’t just to entertain. Crawford and Powell are trying to keep basketball alive in Seattle.

Decades ago, when the city was still the home of the SuperSonics, Seattle was one of the most vibrant basketball communities in the country. That identity was taken from the city in 2008, when the Sonics were moved to Oklahoma City.

Tyler Reuter, a 21-year-old Seattleite raised in a basketball household, reminisced on how the Sonics shaped his young life. “It was a family experience,” Reuter said. “I watched with my brother and my dad every night they were on TV.”

“It affected us a lot,” Isaiah Thomas said. “You don’t really have anybody to look up to and go to NBA games, like that’s what I’ve been doing since I was a little boy, when the Sonics were around. It’s frustrating.”

“So many people associated the city with so many good Sonics teams over the years,” Spencer Hawes said. “It’s one of our identities.”

The city’s hoops fanatics have since desperately searched for a means of getting their team back, or at the very least a way to help fill the void. This is where the Seattle Pro-Am finds its greatest purpose.

“We’re trying to ease the burden, ease the pain a little bit by having this,” Crawford said. “A lot of kids who come here have never seen Kobe Bryant or Blake Griffin or Kyrie Irving in person. It’s been SportsCenter or Xbox. To see these guys, in person, some of the biggest names in the world, right here in front of you, I think it’s a treat.”

The Seattle Pro-Am can’t hope to replace what was lost by the Sonics’ move, but that won’t stop Crawford and Powell from trying to bring basketball back to a city that can’t get enough of it. “I honestly think we’ve done the best we could possibly do,” Crawford said. “For us to be able to bring the kind of talent and these kind of names in the Seattle community with no NBA team is pretty amazing.”