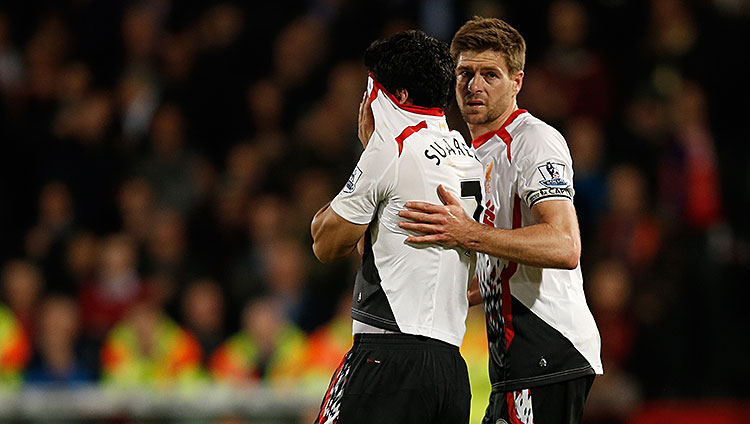 They finished last season in seventh place and came into this year with something like 33-1 odds of winning the Premier League. After back-to-back losses to Manchester City and Chelsea to end 2013, they found themselves in fifth place. But since the beginning of 2014 they’ve won 14 games, tied three, and lost one. They’ve clinched a spot in the Champions League group stages, and they’re atop the table with one game left in their season.

Or: Humans exist as cast members in the blackest comedy, directed by some cruel, faceless, string-pulling auteur we will never see. Everything is a disappointment. And any success is just seemingly self-prescribed medication against the bleak, hopeless, ultimately hollow reality that nothing will ever work out the way we want it to.

After beating Norwich on #PraiseDontBlaze Day, Brendan Rodgers’s side had about an 80 percent chance of winning the league. Now, they’re somewhere around one-in-10 for the trophy. (Projections come via Michael Caley.) They’ve got one point from the last two games, and they just blew a 3-0 lead to Tywin Lannister and The Mountain that apparently is Dwight Gayle.

As it goes, Liverpool choked. They failed to see out what was an extremely statistically likely outcome. They lost to a team that wasn’t necessarily trying to score, and then they gave up three goals in 10 minutes to a team that often struggles to find just one. They had the title and then they let it slip away — except, I’m not so sure.

Yesterday’s game accurately, if in a cosmically sadistic way, encapsulates Liverpool’s season: Rodgers built his team around A Man With No Position turned Disciplined Defensive Midfielder and a group of berserker mini-attackers, each with their own special, surprisingly complementary ways to set your goal on fire.

With one game left, they’ve scored 99 goals and allowed 49. It’s rare that a team is so much more brazenly concerned with scoring goals rather than preventing them, and even rarer still that such a team actually sniffs anything close to a championship in a 38-game season. They’ve outperformed their underlying numbers a good bit, but considering where they were and where they are now, the Mike D’Antoni playbook was the right one for Rodgers to pick from. Liverpool looked at the “Your opponents can’t score when you have the ball” philosophy and did it one better: It’s impossible to give up a goal when you’re putting the ball into the other team’s net.

A win over Palace would’ve put Liverpool at around 30 percent for the title because of the then-eight-goal differential between them and City, who have a game in hand. So, rather than settle for that, they tried to notch as many goals as possible, jumped out to a relatively quick 3-0 lead, tried to jump even higher, and eventually crashed back to earth.

Could they have killed the game off once they escaped the Worst Lead in Soccer? Probably! Should they have stopped pushing for more when it seemed like the team was gassed and Palace was threatening to score a second? Based on the end result, sure; Rodgers even said so himself. But take a slightly wider lens, and a functional one-goal-win-getting team wasn’t what Liverpool came into this game needing to be, and it looks nothing like the team that got them to where they are right now.

A title remains unlikely — and these may be the romantically mad musings of a Liverpool fan just trying to find a way to sleep at night — but there’s still a chance. Play out the rest of the season 10 times, and Liverpool win once. It just depends on which finish we get to see.

Rating the Non-Johnny Draft Quarterbacks on the Manziel Scale