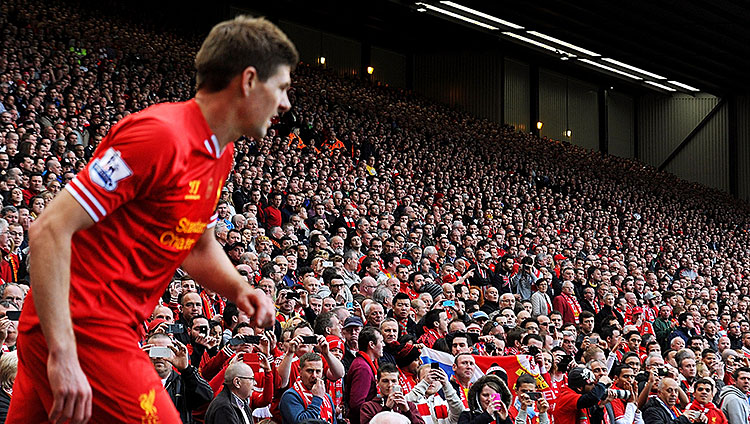 Steven Gerrard cried yesterday, and so did I.

In what lived up to its “Game of the Year/Century/Epoch” billing, Liverpool beat Manchester City 3-2 at Anfield. Raheem Sterling toyed with City’s defense, tilting the field with a swivel of his hips, and suddenly looking like the next great attacking midfielder in a game filled with guys who already are. After another flurry-of-punches first half from Liverpool put them up 2-0, City — without Yaya Toure, who went off injured in the first half and might be done for the season— flipped the game back to even and nearly past it, thanks to the introduction of the brutalist architecture that is James Milner and David Silva deciding to remind Sterling that, yo, you can play this position without all that running.

But a late Vincent Kompany mishit, in a season increasingly full of them, scuffed the ball into the path of Philippe Coutinho, who buried the game winner around Pablo Zabaleta and past Joe Hart. Five goals — and none from either team’s top three scorers.

Win the final four games, and yes, Liverpool are the champions. But with Jose Mourinho standing in the way, trying to pull steel wire across a dark highway at right about head height, nothing’s written. They’re certainly favorites, but with Jordan Henderson, the oil to the Liverpool engine, suspended for the next three matches, the odds of a 19th title are a coin flip. And while Liverpool finally average more points per game than every other team in England, soccer is still the insane, unpredictable, insanely unpredictably beautiful thing that got us right here in the first place.

The camera, as it does, spun directly to Liverpool’s captain after the final whistle blew. He closed his eyes, and then covered them with his arm, like you would if you were, say, playing peekaboo, but when he pulled his arm back, he wasn’t sticking his tongue out and making a face — he was in tears. Wait, he’s crying, I thought. Wait, why is he crying? A brief pause, and Wait … I’m crying, too? WAIT, WHY ARE WE BOTH CRYING? IT’S NOT EVEN 7:30 YET.

The last one’s a ridiculous question in one sense: I’ve been a Liverpool fan for as long as I could watch (almost) every game on TV. Which means I’ve considered getting Gerrard’s face tattooed on pretty much every part of my body. He’s been this voyeuristic constant — someone I’ll never meet, someone I’ll never be able to do anything for, but someone who’s dictated my emotions more consistently than maybe any other individual over the past decade. I’ve graduated high school and college, moved across the country, had busted relationships, lost touch with old friends, and spent a night in Oklahoma, but all the while, Steven Gerrard’s been playing for Liverpool. Of course I’m gonna cry.

At the same time, if Liverpool end up stumbling over the next four games, someone will probably point to this moment and say, “Liverpool already thought they’d won the title. You could see the inevitable screwup dripping down their captain’s face. Also, masculinity is dead.” Except, when you consider everything — Gerrard’s zero EPL titles; the Hillsborough anniversary; how close they were to letting the game totally slip away; how he was the lone holding midfielder against a team that’s scored 86 goals; and how many times over the past few seasons it seemed like the captain might be done — how the hell could he not be in tears?

“It was emotional, very emotional,” Gerrard said afterward. “But we need to keep calm. There are still four big games to come but that meant so much.”

Even though he didn’t realize it, once again, he was saying all this to me.