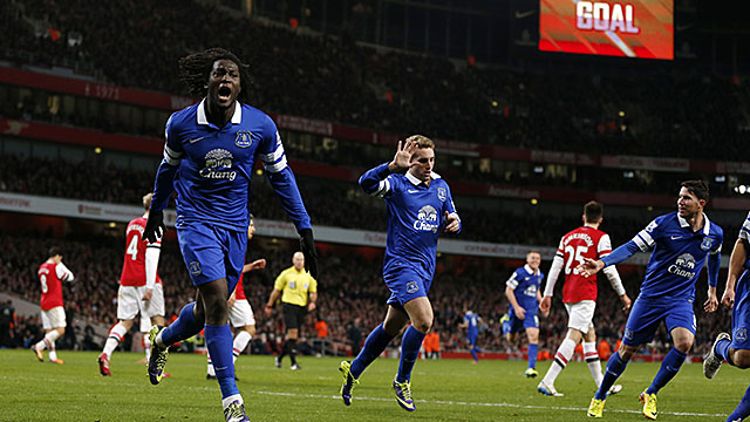 What Is Even Happening?

Chris Ryan: December is not April, as Everton manager Roberto Martinez and Newcastle boss Alan Pardew made sure to mention over the weekend. Big results against Arsenal and Manchester United saw the Everton and Newcastle managers answering questions about their respective clubs’ Champions League qualification chances.

December is not April. But it’s not October, either.

This is the Premweird League this year. Take off your seat belt and turn into the spin. When Arsenal and Everton play one of the matches of the year, a 1-1 draw at the Emirates, and the result has serious implications for the title chase and Champions League places, then you know something is happening in the league. For different reasons and to varying extremes, Chelsea, City, and United are all having trouble getting out of bed in the morning. Personally, I don’t really care who builds their teams like a Kenny Powers–Rick Ross GIF …

I’m just happy to see a couple of new teams, and a new class of players, at the top of the table. Going into the Christmas rush of matches (it’s almost Boxing Day, guys!), we should all consider ourselves on Santa’s nice list, since we will be getting Ross Barkley, Gerard Deulofeu, Mesut Ozil, Aaron Ramsey, Jesus Navas, and, apparently, Dani Osvaldo under our tree …

It’s so exciting to watch these guys play like world-beaters every week; it’s such a pleasant experience to watch City and Chelsea and not have the result be a foregone conclusion; it’s awesome to see Southampton, West Brom, and Everton taking out “top four” teams and challenging for their places at the table; and, regardless of your allegiances, it’s just nice to see Arsenal and Liverpool getting in the title race mix and it will be fascinating to watch them play the likes of City, Chelsea, Newcastle, and Tottenham over the next few weeks. The best part? You know there are more twists and turns coming: Tottenham could start putting together a run, maybe once Christian Eriksen comes back; United could make a Moyse-ian, second-half push; and I don’t know about you, but I think that’s Marouane Chamakh’s music they’re playing!

Mike L. Goodman: Jose Mourinho, as he frequently does, summed it up best. “I don’t feel comfortable enough to tell you what I think about the game. We’re in trouble. It is a concern [conceding so many goals]. I don’t like it, I don’t organize my teams to be like this.”

What’s particularly amazing about the amount of goals his team has conceded is that Chelsea haven’t experienced any of the hallmarks of a club suffering from a defensive crisis. In fact, over the last two games, they’ve given up a grand total of six shots on target.

Those six just all happened to go in the net. On the other hand, let’s look at a team like Tottenham Hotspur, who also played two games on the road against bottom-dwelling opponents. Unlike Chelsea, they won both games (against Fulham and Sunderland), but gave up only two goals in the process.

That’s 10 shots on target and only two goals conceded. And those are the numbers behind the patching up of a leaking Spurs ship.

So, either Chelsea have played the last couple of games under a cloud of some bad luck, or Petr Cech has suddenly forgotten how to walk.

In the interest of fairness to Cech and his ambulatory ability, it’s worth pointing out that four of the six goals he’s conceded have been from set pieces, where ideally you’d like your defenders to clear the ball before the team has a shot on target, and when they don’t there’s often nothing a goaltender can do. And the other two? Well, first was this from Stephen Ireland.

And then this from Oussama Assaidi.

If you give up only two shots on target from open play, and they happen to be those two beauties, then Mourinho’s right, you are in trouble. Luckily for Chelsea, that’s unlikely to be the case on a regular basis.

Ryan O’Hanlon: Last night, the Daily Mail reported that Steven Gerrard is facing six weeks on the sidelines after suffering a possibly pulled hamstring in Saturday’s 4-1 win over West Ham — and the Liverpool fan writing this didn’t once consider locking himself in a closet, safe from more bad news in the void of hanging sweaters and darkness.

To be clear: Steven Gerrard is a god.

He’s also still a very good soccer player, despite being 33 years old. But as is always the question when athletes age: Will he change his game to fit his deteriorating body? It wasn’t clear, initially, with Liverpool’s captain. He was always at his most dominant when running, shooting, passing, and tackling (well, maybe not tackling) as hard as he possibly could. The defining characteristic of the in-his-prime Gerrard was how big everything he did was; the field almost didn’t seem to fit all the things he made happen. But when your body won’t work as well anymore, it needs to get smaller. After playing more than 30 total games for his club every season since 1999, Gerrard played only 39 EPL games over the 2010-11 and 2011-12 seasons, combined. There was even a very brief period when it looked like the team was better off with Lucas and Charlie Adam (who is 27!) as its midfield pairing. Then the club hired Brendan Rodgers, whose quick, short-passing style seemed ill-fitted to the aging Stevie. So, as logic would suggest, he became a holding midfielder and led the team in appearances (46) and chances created (93) last season.

One day, Steven Gerrard — oh no — won’t play for Liverpool. However much time he ends up missing, the next couple games are a brief, if distorted, look into the future. While it’s crazy to suggest that the team will be better off without the man who leads them in assists, key passes per game, and passes per game, it’s probably not the end of the world. The Lucas-Gerrard pairing has been good at best and shoulders much of the blame for the team’s worryingly high shots-conceded-per-game number. Could Joe Allen, who was great against West Ham, or Jordan Henderson be a better fit with Lucas? Will Coutinho take on the even-bigger creative role he seems ready for? Plus, Suarez. Although, with games against Tottenham, Chelsea, and Manchester City before New Year’s, that closet might not be unoccupied for long.

So You Want to Be a Referee?

Goodman: Mike Dean awarded a controversial penalty to Fulham against Aston Villa on Sunday. Or rather, it would have been controversial if anybody really cared about the match. You can see the play as it unfolds, complete with an absolutely gorgeous pass by Dimitar Berbatov at the 1:30 mark. Also, take a second to enjoy the ultimate Berba-ness of that Berbatov penalty. The only thing that could make that penalty more Berb-tastic is if he were actually puffing on a cigarette while he took it.

Reasonable minds can differ on whether the contact between Fulham’s Alexander Kacaniklic and Aston Villa defender Leandro Bacuna was in fact worthy of a penalty (just so you know, though, reasonable minds that think it wasn’t a penalty are wrong. Bacuna trails his left foot and takes out Kacaniklic’s legs), but that’s not really the point. The play develops at high speed, which means that, despite being very well positioned, Dean was a half-field away when he had to make a difficult, game-altering decision. Watching the replay of the foul, it’s clear how far behind the play he is. It’d be one thing if Dean were lazy, or slow to react, or out of position, but he isn’t, he’s exactly where he’s supposed to be.

All of which serve to highlight exactly how insane it is that the world expects one referee to accurately call a soccer match. Would it really be that hard for the sport to evolve to a system that involves having two referees, each of whom control one half of the field? Basketball has gone from two referees to three, baseball from three umpires to four, and hockey has evolved from a one-referee, two–assistant referee system to a two-referee, two-assistant system. The NHL initiated the change for the 2000-01 season, and the Olympics instituted the four-man system for the 2010 Winter Olympics. In other words, sports evolve.

Brett Koremenos: What Sir Alex Ferguson was able to accomplish at Manchester United is unlikely to be matched by anyone, much less another United boss. David Moyes’s first season in charge of Manchester United is making Ferguson’s final campaign as manager seem like one of his greatest accomplishments. During the 2012-13 season, Ferguson authored a master class on how to mix and match personnel and styles to maximize performance. Under Moyes, the glaring flaws of the roster have become far more evident.

The limitations in the midfield, both centrally and out wide — where an 18-year-old has quite possibly been their best and most consistent performer — can no longer be ignored. The back line has also looked increasingly old and unreliable. Patrice Evra, responsible for Newcastle’s winning goal over the weekend, has become a huge liability on the left. The options both centrally and on the right, with the exception of the ever-reliable Nemanja Vidic, have also been less than inspiring. Wayne Rooney and Robin van Persie are still world-class players, but Rooney has always been something of a positionally ambiguous talent, and Moyes’s insistence on playing those two together has blocked Shinji Kagawa from being used properly as a creative no. 10.

All the complaints levied against Moyes — late squad selection, bungled summer transfer window, overly conservative play, and sparing use of Kagawa — don’t take into account that maybe, just maybe, United isn’t that good. And maybe other teams know it. Just look at how Everton and Newcastle played against Moyes’s team. They knew that they could match them on talent, and they knew that the mystique that surrounded the team — that feeling that United were never done until the final whistle, and that the final whistle wouldn’t blow until Ferguson was good and ready — seems to have left Old Trafford.

Kyle Korver's Big Night, and the Day on the Ocean That Made It Possible