Kyle Korver’s Big Night, and the Day on the Ocean That Made It Possible 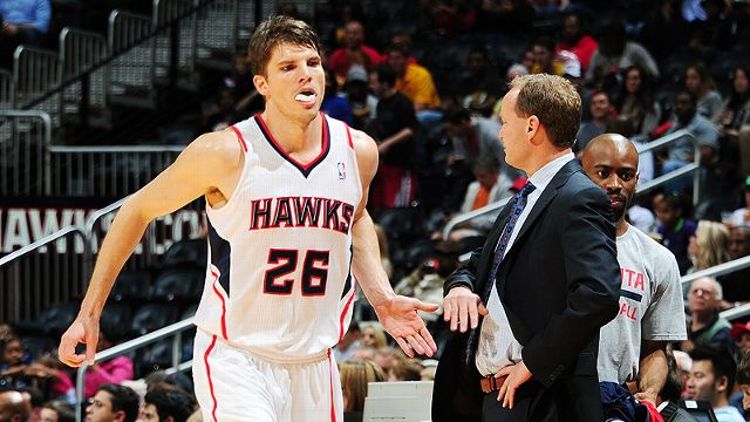 ACT 1: LAST FRIDAY, AMONG THE KORVERS

I’m sitting third row at the Hawks-Cavs game, flanked by two large, handsome Midwesterners. To my right is the 6-foot-5 pastor of the Third Reformed Church in Pella, Iowa, who has a full head of gray hair and is wearing a tracksuit and glasses. The woman to my left is tall, too, with transfixing eyes and a habit of touching your knee when she’s talking to you. None of us has been this close to an NBA game before. This is surprising, considering that the man and woman — Kevin and Laine Korver — have a son on the court who’s been in the NBA for 10 years and has made a 3-pointer in 89 straight games.

They just happened to be in town. And — what a nice coincidence! — it turned out that this son, their oldest of four, Kyle, is on track to make NBA history tonight. Someone gave them tickets.

Klay, their second oldest, came with his wife. Kyle’s wife and daughter are here, too. Klay runs Kyle’s foundation, which focuses on helping inner-city kids. Like his parents, he is also Abercrombie handsome, tall, and exceedingly nice. Klay was a baller himself, but he wrecked his knees in college. He still ended up with 1,000 points and 500 rebounds at Drake. “My ceiling without the injury? Maybe Matt Carroll.”

The next oldest, Kaleb, played at Creighton, like Kyle, and now works for Nike. The youngest, Kirk, 23, is a redshirt senior at Missouri–Kansas City; he has broken his foot six times. Kaleb occasionally beat Kyle in backyard games growing up. Klay won only once. “And then he never let me win again,” he says, smiling.

During warm-ups, Kyle takes and makes a number of one-handed 3s.

“I fed them a lot of food,” says Laine of her extra-large, K-themed brood. She also passed on some skills: She had a 74-point game in high school — way before Jack Taylor was taking 108 shots a game. Her coach ran a system that gave one player lots of looks: “My senior year, I was that player.” She used to tell her sons: You’re not good until you’re consistent. Kevin — who played at Central College, like Laine — watched the boys in the backyard and gave a thumbs up or down from a nearby window. Kyle had a “helicopter spin” jumper until his sophomore year, when he made varsity after finally growing and getting some shooting tips from an uncle.

The game starts and Kyle chomps his mouth piece. The Hawks take an early lead.

Growing up around Los Angeles, the Korver boys idolized the Showtime Lakers. Kyle would be Magic. Klay would be Byron Scott. “Oh, and Larry [Bird],” he adds. “We all loved Larry.” Once Showtime broke apart and they moved to Iowa, they became Spurs fans. “If Kyle hadn’t made it to the NBA,” says Klay, “we’d all still be Spurs fans.”

At 10:55 in the first quarter, Kyle misses a lightly contested corner 3.

In his first game with the Hawks, in 2012, Kyle missed all his 3s. And then he began to make them. Lots of things have happened since that streak began, on November 4 of last year. Two of his brothers have gotten married. His daughter Kyra was born and celebrated her first birthday. Eleven teams approached him for his services when free agency started. He hit a game winner against Washington …

Mom, waxing technical: “He’s also had a lot of junk defenses thrown at him.”

His parents record all his games on the DVR and watch them during the summers. They figure they’ve driven 200,000 miles to see their boys play basketball over the years. They’ve gone through five cars.

Kyle passes to Paul Millsap, who makes a layup.

He curls around a screen and takes a hit from Andrew Bynum.

Mom: “It’s physical out there!” Her son took a charge from Shaq once. Had to eat through a straw after that for a while. Had a ringing in his ears for days.

Kyle takes and misses another jumper, this one from near the free throw line. He’s 0-2. The Korvers, however, are not worried. Worry isn’t a Midwestern feeling.

Kyle’s main vehicle is a Chevy pickup truck he’s had for a few years. He picks up his brothers from the airport when they visit and gives them a Mountain Dew. This is what their grandfather would do. He was a reliable man.

Late in the first, with the Hawks up 15-10, Millsap goes for a driving layup, gets caught in traffic, and kicks it out to Korver, at the right-center of the key. Swish. The half-filled arena goes half-wild. Players on both teams congratulate him. A montage of him draining treys flashes on the screen above. He doesn’t know this, but all those 3-pointers during the streak have traveled 5,451.5 feet, or a little over a mile.

Mom: “And we just happened to be here!”

She gives me a hug. Moments later, the big screen shows a stoic looking Korver sitting on the bench. “He’s just happy it’s over,” explains Mom. “He likes being understated.”

Danny Ferry — looking dapper, like at least a 3-seed GM — comes over to congratulate the family. Someone hands them a Wheaties Box bearing Kyle’s likeness.

Dad’s explanation for his son’s success in breaking an 18-year-old NBA record: “If you spend 10,000 hours doing something, you become an expert at it.”

ACT 2: YESTERDAY, HE SPEAKS OF THE MISOGI

Two days later Kyle is on the phone, on an off day, sounding relaxed. He has a theory about how he did it. It sounds a bit far-fetched, maybe, but do you have a few minutes?

Hear him out. It’s important.

Most of the guys on the team haven’t heard it.

Most of them, he thinks, probably wouldn’t get it. Here he is:

“There’s a jiu-jitsu concept that was introduced to me this summer called the misogi. It comes from the idea that as we get older we take fewer risks, think more inside the box, get more careful, make more decisions based on fear. To combat this, once a year you do something that you’re not sure you can do. That’s the misogi. I’m not talking a marathon — lots of people do that. It’s more like, climb to the top of the farthest mountain you can see. That’s where I’m gonna go.

“So as my trainer is telling me all this, I’m like, ‘Yes, I get this.’ I feel it. I feel it in my basketball game. I want to work on different moves, catch and shoot faster. But what are we doing?

“He says, ‘Have you ever stand-up paddleboarded before?’ No. But I’m in. ‘How do you feel about paddleboarding from the Channel Islands to Santa Barbara? Twenty-five miles across open water?’ I’m in!

“So we practice seven or eight times. Then we took a boat to the islands in early September. Suddenly I found myself in the middle of the ocean, on a 13-foot board called the Big Easy. I was with two friends. We had packs. A boat followed us: Every few hours they’d throw us Gatorade, water, a Clif Bar. The first few hours, I kept falling. I had to paddle from my knees. Maybe six hours in, getting baked, this pod of dolphins comes flying in from nowhere. They’re under us, around us. It was magical. Out of a movie! I was like, ‘Yo! Come with us! We’re gonna make it!’ I started paddling really fast. Then, an hour later, this dorsal fin pokes out of the water near us. And it keeps going up and up and up. This thing was like two and a half feet tall, and it comes for us. It comes for us! I was like, ‘Is that a killer whale? It’s so big!’ But there are no killer whales in Santa Barbara.

“The guy in the boat jumped up and said, ‘That’s a mola mola.’

“We’re standing our boards with our paddles in our hands. Turned out it was a 2,000-pound fish.

“I could talk about this for a long time.

“The point is, as we’re paddleboarding … there wasn’t a tree, there wasn’t a corner, there weren’t mile markers. You had to break it down even smaller. Into the stroke. So I sat there and tried to perfect my stroke each time I pull. The angles of how I’m pulling the paddle back and going forward. How long I’m going. How I’m using my wrist. All these things. You try to make the stroke perfect. It took nine hours.

“My bones felt hungover for like two weeks. Training camp started and I thought I was in bad shape. But I recovered, and I think I’ve become more serious about my shot. My mechanics. My revolutions. The stroke.

“That’s what the misogi did.”