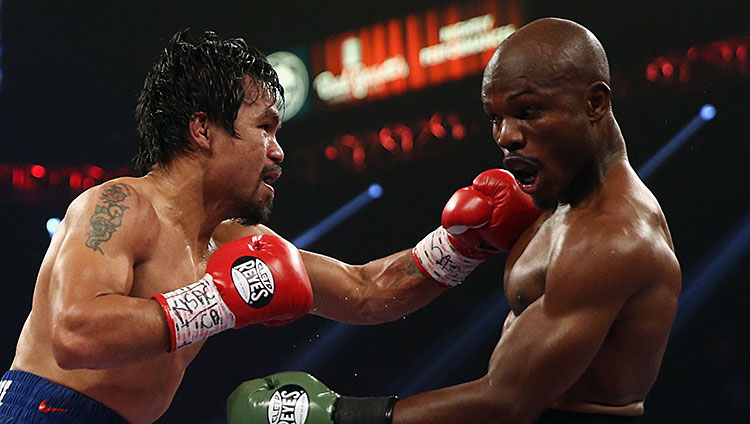 Thursday evening, a few hours after I arrived in Las Vegas to cover the tail end of fight week for Saturday’s rematch between Manny Pacquiao and Timothy Bradley, my friend Kevin texted me: “U by yourself?? U can come up to Mannys.”

Thanks to family connections, Kevin and his wife, Jackie, belong to something like the second or third dermis of Pacquiao’s many-layered entourage. They aren’t the folks who sleep on Pacquiao’s floor and fluff his rice, but they get invited to the house anytime the boxer trains in Los Angeles and they’re on the long list of friends who receive free tickets to his fights.

An hour or so before then, Kevin’s instructions had been different: “Everyone getting kicked out haha he’s resting.” What changed? In all likelihood, Pacquiao and his inner circle just accepted that it would be impossible to clear the Filipino boxer’s 61st-floor suite of well-wishers, associates, gawkers, and hangers-on without giving them at least an opportunity to see the fighter. This night, however, the team would make an effort to keep it low-key. Kevin and Jackie were up there to steal a moment with Manny so they could give him a personalized basketball jersey they’d had made for him.

When I stepped into the Mandalay Bay casino elevator, it was just me and about 15 Filipino guests chit-chatting in Tagalog about which flight they’d arrived on. We were all headed to the same floor: 61. Low-key. As our little horde made its way inside Manny’s suite, we joined a throng of about 100 people gathered around Pacquiao. Again: super low-key.

Manny, dressed in a neon-blue track jacket and a camouflage baseball hat emblazoned with one of his logos, was singing Evangelical soft rock beside a beatific, nearly expressionless keyboardist with disheveled, shoulder-length black hair. Apparently, this scene was the perfect backdrop for cell-phone selfies. A haphazard line formed in front of Pacquiao, and his guests took turns photographing themselves while flashing a “thumbs up” or “hang loose” symbol in front of the Philippines’ greatest-ever sports icon/rising politician/Bible-quoting maniac as he warbled his way through melodies about compassion and the gates of heaven. 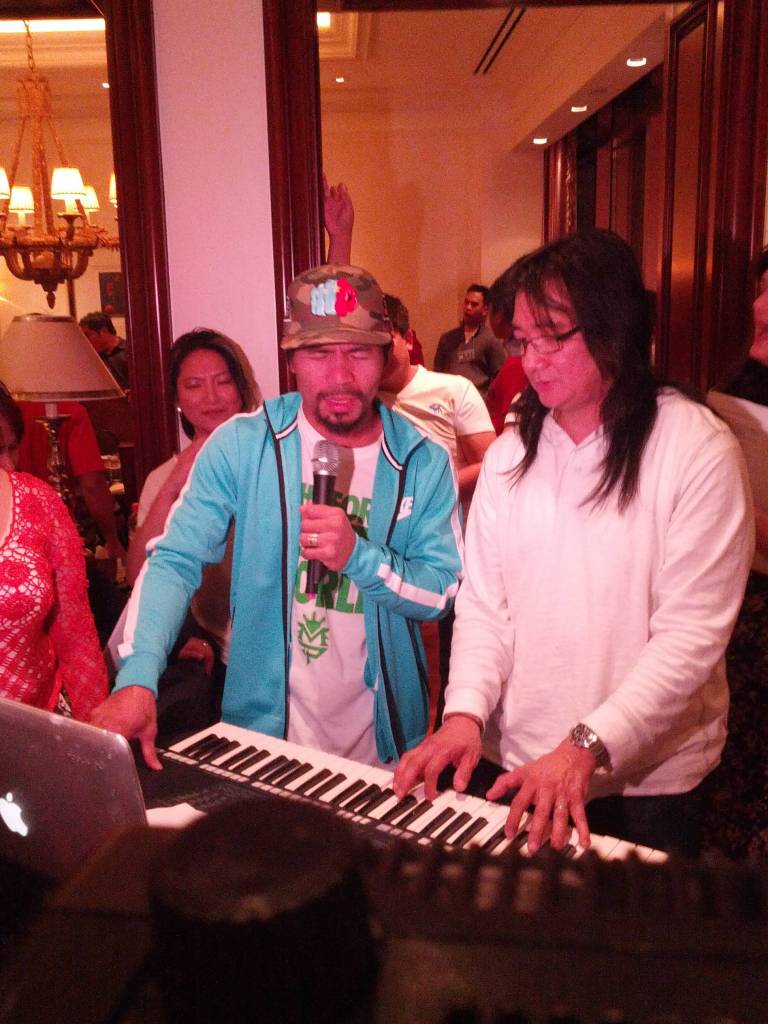 As Bible study sessions go, it was not the most reverent scene I’d witnessed, but if the guests’ choice to worship at the altar of celebrity irked Pacquiao, he didn’t show it — which is no surprise. Pacquiao is the eye of the fawning, hustling, mooching storm that swirls around him nearly all the time. He never seems rattled, but instead remains at the center of his chaotic milieu, amiable but aloof, entertained but unfazed. Manny stays Manny.

Pacquiao’s self-assuredness seemed to play a meaningful role in his victory over Bradley on Saturday night. Now, before we play armchair boxing psychiatrist, let’s be clear: Pacquiao beat Bradley because Pacquiao wore him down and outboxed him. Pacquiao’s confidence and strength of character did not raise welts on the right side of Bradley’s face, all along his cheekbone and eye socket. Pacquiao’s punches did that. But to whatever extent the mental game factored into the result of this weekend’s WBO welterweight title fight, it seemed to favor Pacquiao, who fought like a very good version of his usual kinetic, combination-punching self. Bradley, on the other hand, fought less like the versatile and determined boxer who grinds out victories in a dozen different ways that he’s been for most of his career. Instead, he fought at times like a knockout artist, which he isn’t, and at times like a clowning defensive slickster, which he ain’t. Neither role fit, and neither was effective enough to beat Pacquiao.

It was said that both men had something to prove going into Saturday’s fight. For Pacquiao, it was about proving Bradley’s controversial 2012 split-decision victory in their first meeting had been exactly the monumental feat of bullshittery that most of the world saw it to be. But Pacquiao also had something else to fight for, which he referenced frequently in pre-fight press appearances by saying, “My journey will continue.” Pacquiao’s rise from poverty to international stardom and the Forbes highest-paid athletes list has been the best story in boxing for the better part of a decade. From slanging doughnuts to stuffing his shorts with metal to make the minimum weight as a 16-year-old pro to showing up unannounced at Freddie Roach’s gym and eventually sending Oscar De La Hoya into retirement, it was the classic rags-to-riches narrative, only with richer and more dramatic details.

But after Juan Manuel Marquez knocked Pacquiao out cold two Decembers ago, it started to seem like boxing’s storytellers were licking their chops for the next phase in Pacquiao’s story — the downfall. It’s another classic boxing arc, ending in financial ruin, once-great shot fighters taking beatings just to get a payday, and slurred speech. Even after Pacquiao pummeled the durable Brandon Rios en route to a dominant 12-round decision in his next fight, many in boxing continued to wonder how much of Pacquiao’s once-devastating speed, power, and feral aggression remained, and if it would be enough to defeat Bradley in a rematch. This meant that besides fighting to avenge his bogus loss in the first fight, Pacquiao was fighting to silence the whispers that his inspirational story had passed its inflection point.

Bradley, to borrow a phrase from the Baltimore sage Slim Charles, was fighting on a lie, as if defeating Pacquiao in the rematch would validate the decision he received in their first fight. It wouldn’t have done that, but a decisive win for Bradley could at least prove that at this point in their careers, Bradley was the better man. It could prove that he didn’t deserve the ridicule and the death threats he endured in response to the first fight, and that he deserves to be a star on Pacquiao’s level. (The former is as true — it’s not Bradley’s fault he won — as the latter is false. There’s nothing fair about fame, which comes from an unpredictable mélange of timing, charisma, opportunity, achievement, hype, and dozens more mostly uncontrollable factors. Bradley could be as good as Pacquiao or even better. He will likely never be as famous.)

Although both fighters carried their own baggage into Saturday’s rematch, only Bradley seemed to let his affect his performance. When Bradley said before the fight that he would look to knock out Pacquiao, it was hard to take him seriously. Only 12 of Bradley’s 31 wins had come by knockout. Yet lo and behold, when Pacquiao rocked Bradley with flurries in the second and third rounds, Bradley stood toe-to-toe with him and threw punches back. He lost those early exchanges, but the bold strategy showed signs of paying off in the fourth, when he tagged Manny with a pair of overhand rights, the second of which lifted Pacquiao off his feet and appeared to stagger him briefly.

From there, Bradley’s punches grew wilder and wilder. Perhaps he was encouraged by that early success, or maybe he believed that he could never win a decision over Pacquiao after the outrage over the scorecards in their first matchup, making a fight-ending haymaker his best chance at victory. On offense, however, this decision became Bradley’s undoing. He did land several other overhand rights before the final bell, but rarely more than one or two per round. He missed many more than he landed, and those big whiffs likely cost him some energy in the later rounds. Meanwhile, Pacquiao found his rhythm and began landing his straight lefts with increasing frequency.

In Rounds 5 and 6, when Bradley wasn’t loading up on those big, looping rights, he spent long stretches beckoning Pacquiao to come hit him, then dodging the onslaught to the best of his abilities. The ploy was intended to make Pacquiao look bad, to stare down an opponent known for having two of the fastest, most powerful fists in boxing, and say, “You can’t hurt me; you can’t even touch me.” Thanks to sharp reflexes and deft head and upper-body movement, Bradley did manage to weather the storms he beckoned without absorbing many clean blows, but he failed to put an exclamation point on these defensive statements. That kind of posturing works when the boxer dodging all those punches can deliver an effective counter of his own. Bradley didn’t do that, and the feeling inside the MGM Grand Garden Arena was not, “Golly, look at this daredevil dynamo Tim Bradley!” It was more like, “This dumbass is not Pernell Whitaker, and he needs to start fighting before he gets caught with something.”

Then, in Round 7, Bradley got caught with a whole lot, most notably a 10-punch combination in the corner, with Pacquiao landing a succession of hard lefts around Bradley’s raised guard. After the flurry, Bradley stumbled forward and gestured for Pacquiao to keep coming, but it was his last macho challenge of the fight.

[protected-iframe id=”a75d4b33ebf494e5368cc53a962f0a23-60203239-59774278″ info=”//instagram.com/p/mwMiMLggwZ/embed/” width=”612″ height=”710″ frameborder=”0″ scrolling=”no”]The seventh was a turning point in what looked to be an even fight through six. Pacquiao remained steady and effective over the last five rounds while Bradley, either because he wore himself out or because he was slowed by a calf strain, faded down the stretch. Maybe Bradley was right to assume that he had no chance to win a decision over Pacquiao in their rematch, but the pseudo-star style in which he chose to fight never gave him a chance to be considered a rightful winner on anyone’s scorecard, official or not.

A clear win over Bradley, who defeated Marquez handily last October and who had risen to no. 3 on many lists of the best pound-for-pound fighters in the world, should be enough to quiet the notion that the cruel reckoning that awaits so many boxers is on Pacquiao’s doorstep. It might not, though. Pacquiao is 35 years old and his age, wear and tear, and eventual retirement are likely to remain story lines going into and coming out of all his fights for the rest of his career. This much is for sure, however: No matter the speculation around him, Manny will stay Manny — amiable, unfazed, a little aloof.

And that’s a great thing, because there is no other athlete like Manny Pacquiao; no other prize fighter who enters the ring to Katy Perry’s “Roar” with not one iota of intentional irony; no other sportsman who pours his heart out singing “Sometimes When We Touch” on Jimmy Kimmel Live; no other fighter who can describe his Cleto Reyes gloves and make it sound like an off-color anatomical reference; and no other famous person who can introduce sports fans to characters like Mommy Dionisia Pacquiao, who arguably became Saturday night’s most decisive winner when HBO cameras found her in the MGM crowd, clutching a rosary and prayer card while raving, screeching, flailing, and pointing at the ring.

Thanks to Manny Pacquiao, we live in a world where a 64-year-old Filipina known to her nation as “Mommy D” shows up on the same network as True Detective and appears to be either possessed by the Holy Ghost or attempting to cast a spell on the ring (or perhaps both), while A.C. Slater from Saved by the Bell calls the action on a concurrent broadcast. We should all be grateful for Manny Pacquiao, for his improvisational brilliance in the ring and for his unintentional comedy outside it. Stay Manny, Manny.