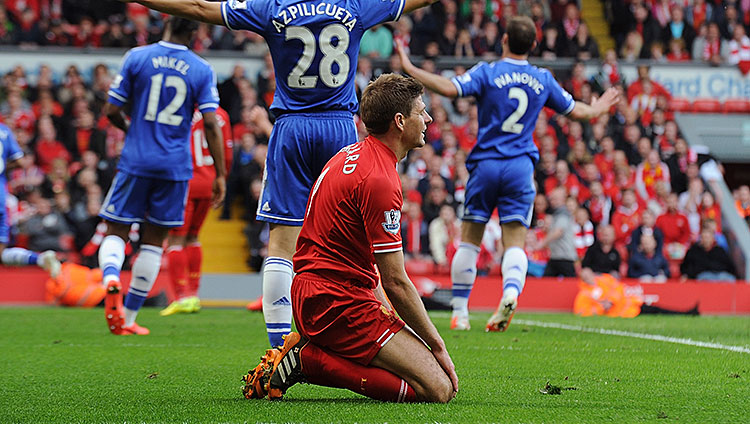 Mike L. Goodman: The end approaches. And, with Everton more or less punting their last vestiges of Champions League qualification hope thanks to two own goals at Southampton, we’re down to two races that matter. It’s the race for the top, and the race out of the bottom. With apologies to the supporters of 16 teams out there, and members of the Ryan Giggs managerial fan club, that means there were two games that mattered way more than the rest.

First was Liverpool’s loss to Chelsea, which again hands the title race front-runner baton to Manchester City; then there was Sunderland seemingly breaking the last lock on the straitjacket for another Houdini-like escape from relegation.

Liverpool vs. Chelsea: The Morality Play

Goodman: Perhaps one of the reasons Jose Mourinho is so loved by the English press is the brilliance with which he turns everything into the us-against-them, tribalist narrative that lurks beneath much of English football. When West Ham play with conservative, defensive tactics against Chelsea, it’s “19th-century football”; when Chelsea do it against Liverpool, to get a tough, defensive 2-0 win, Mourinho says: “My players are amazing. They had a fantastic match. It is a great victory, and we celebrate as we have because it was a big performance by everyone and a beautiful victory.” It’s Mourinho, but it’s also a microcosm of soccer fandom. When they do it, it’s horribly wrong; when we do it, it’s justified.

Of course, the idea that anybody can just instruct their players to sit deep and defend is absurd, and nobody gets defensive performances out of top teams like Mourinho does. It’s days like Sunday that make it crystal clear why he prefers a host of wingers like André Schürrle, Willian, and Mohamed Salah to creative types like Juan Mata and Oscar — who has been recently limited to appearances against weaker sides. Wing players who are scary attacking forces but also capable and committed to defending extremely deep in their own zone aren’t exactly common, but Mourinho finds them, refines them, and deploys them with a scary precision. It was a strong, dominant defensive performance from Chelsea, the only one this year that Liverpool were unable to break down.

The Man Who Wasn’t There

Ryan O’Hanlon: If Jonjo Shelvey scores a 50-yard asteroid-volley in front of 20,000 people as Swansea City beat Aston Villa 4-1 in a near-meaningless game on the third-to-last weekend of the Premier League season, does it actually happen? And in the parallel universe where Shelvey still plays for Liverpool, does he score the same space object of a goal a day later against Chelsea?

Liverpool sold Shelvey to Swansea last September for around $9 million, approximately a $6 million return on their initial investment after buying the midfielder from Charlton Athletic in 2010, when he was 19. This was strange, on some economic scale, because Swansea is supposed to be the team that flips young assets to Liverpool, not the other way around.

But nothing about Shelvey has ever really made much sense. One day he’s scoring two goals in the Europa League, and the next he’s getting sent off against Manchester United and telling Sir Alex Ferguson to find him in the parking lot. Earlier this season, against his old club, he became the first player to single-handedly win a game that ended up tied. He also once managed to offend a large group of people by purchasing an inexpensive vacuum.

The goal on Saturday — one that only a certain kind of lovable madman tries — will be the highlight of the 22-year-old’s season, because you don’t forget when you’re briefly able to manipulate gravity. But it’s also the sort of goal Liverpool could’ve used yesterday.

Jose Mourinho built a movable Tower of London in Merseyside, limiting the hosts to five shots (two on target) from inside the penalty area, compared to 21 (six on target) from outside in a 2-0 win. For the most part, Liverpool were only going to score with a maybe-not-quite-Shelvey-esque low-percentage hit from distance. This is what the best defenses do — limit the quality of the chances, rather than the amount — and it’s close to exactly what the Special One would’ve wanted. He also wanted Liverpool to have most of the possession because, as the Mourinho Doctrine goes: If you have the ball, you’re more likely to make a mistake. Therefore, don’t have the ball.

For a little while, some saw Shelvey, with his constant eagerness and that ability to make the field seem tiny, as the logical successor to Liverpool’s captain, and Steven Gerrard himself even encouraged Jonjo to stay when he initially considered a move away to find more playing time. “He has always been my favorite player, but I suppose there comes a time in your life when you can’t copy him,” Shelvey said. “You have got to be your own player.”

Goodman: Most of the time, so-called “six-pointers” are overrated battles. At the top of the table you can always look to other games against weaker opposition that a team could have won to offset points they drop against their rivals. But, late in the season, at the bottom of the table, it’s a different story. After all, if you aren’t going to take points from fellow relegation fodder, who exactly are you going to take them from?

Well, unless you’re Sunderland, because then that list includes Chelsea and Manchester City, but I digress.

Sunderland’s six-pointer with Cardiff ended up being utterly one-sided, due in no small part to the dreaded double offense of red card and penalty called against Cardiff defender Juan Cala. It was a big call, one that effectively ended Cardiff’s Premier League tenure, and despite it being an odd circumstance Phil Dowd got it completely right.

Two weird things about this passage of play: First, while Cala was clearly tugging on Sunderland striker Connor Wickham, it sure looked like the foul was outside the box. But there’s a FIFA rule that says even if tugging happens outside the box, if it continues inside the box, which it did, it’s a penalty.

Second, you may notice that Wickham, upon feeling contact, did not immediately drop to the ground and roll around in anguish (had he done so, he might not have won a penalty, since the contact wouldn’t have had a chance to continue inside the box). Instead he tried to play through the contact. That put Dowd in an awkward position as referee, since he had the option to allow play to continue, to see if an advantage would develop for Wickham. Otherwise you could get the situation that happened earlier this season when Jozy Altidore had a goal��disallowed by the ref. But Dowd took an awfully long time (longer than the GIF) to see if an advantage developed. It’s definitely unusual, but there’s no cap in the rulebook for how long the referee can allow play to run. In fact, the rules give the referee the highly technical guideline of “several seconds” as the basis for making their decision. FIFA, precise as always.

Anyway, no advantage developed, Dowd called the play back and awarded the red card and penalty, and Cardiff got to enjoy a trip back down to the Championship. Sunderland, meanwhile, seem likely to Houdini through another year.

Two weeks to go and the races look pretty clear. At least until next week.