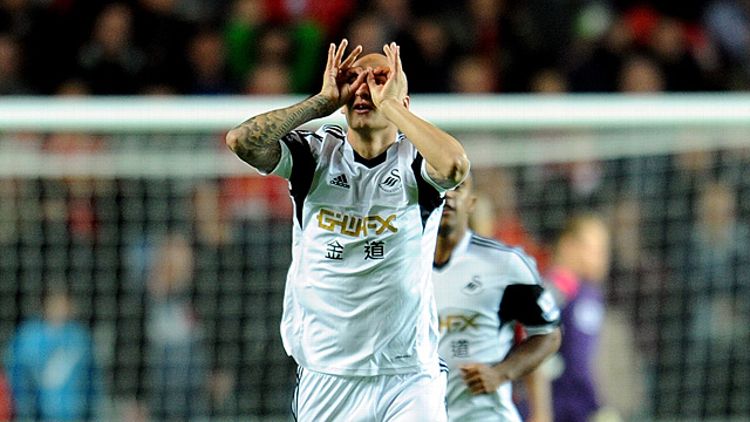 That’s Shelvey and Liverpool manager Brendan Rodgers, as seen in the unintentionally hilarious TV documentary Being Liverpool (ENVELOPES!). Guess what. Shelvey doesn’t play for Liverpool anymore. The 21-year-old English midfielder was released from the Merseyside nest like a baby bald eagle, told to go find some playing time. He landed in Wales, signing up with Michael Laudrup’s Swansea.

Yesterday, Shelvey’s old club visited his new club in one of the more entertaining matches of the young season, a 2-2 draw that saw Liverpool stay atop the Premier League table. Before the game, the NBC cameras were trained on Shelvey as if he was Brett Favre returning to Lambeau. To my mind, Jonjo is best known for his Savalas dome and getting tossed from the Liverpool–Manchester United match in 2012. But obviously, whoever was running the booth last night knew something that I didn’t. This was Jonjo’s night. Like someone in The Guardian’s minute-by-minute said, it wasn’t Liverpool vs. Swansea, it was Jonjo vs. Jonjo. Jonjo won the game, lost the game, lost it again, then saved it. Gamut. Human. Emotions. I really like writing the word “Jonjo.” Here’s what happened:

In the second minute, Jonjo scored on his old club, smashing a shot into a midfielder, scooting around Mamadou Sakho, jumping over Martin Skrtel, and smashing one past Simon Mignolet. Jonjo: hero.

In the FOURTH MINUTE (like 120 seconds later), Jonjo made an innocent enough back pass to his keeper, Michel Vorm. You know who else was innocent enough? Lennie from Of Mice and Men. Daniel Sturridge jumped in there and killed the rabbits. Jonjo: villain.

After a tense 20 or so minutes of possession football from both teams (lots of passing, and passing, and passing), Jonjo struck again. This time he fired a laser-guided pass across the field to Victor Moses, who happens to play for Liverpool. Moses then got on the board for the Reds with the above snap shot. Jonjo: folk hero!

Then, with his Swansea team down 2-1 in the 64th minute, Jonjo laid this Christmas present header down for Michu …

Jonjo’s line on the night was one goal, three assists — two for Liverpool, one for Swansea. What a legend. After the match, Jonjo’s old manager, Rodgers, said, “Jonjo, bless him, is a terrific boy. He made a brave decision to leave Liverpool FC. He’s a terrific young player and I was disappointed when he left.” I can’t tell how much of that I believe.

Going into the match, Jonjo was probably already feeling a bunch of … well, feelings. Playing against his old team, old teammates, trying to make a fresh start, trying to prove his worth to his new club, and their supporters. Whether you think he was genuinely seeking more playing time, or was deemed surplus to requirements at Liverpool, you have to respect his sense of self-determination. Three or four years ago, he was a prospect coming out of Charlton who drew favorable comparisons to Steven Gerrard. By the end of last season he was barely getting on the field. He went to Swansea to jump-start his career, something a lot of other players on the periphery of big clubs should probably do.

Regardless of how you felt about his on-field performance last night, whether it made you laugh or cry (it should have made you do both), you had to appreciate how genuine he seemed in the postmatch interview …

Thank You for Not Coaching, Week 2