Stuck Between Systems: The Ever-Changing Lakers Take On the Rockets 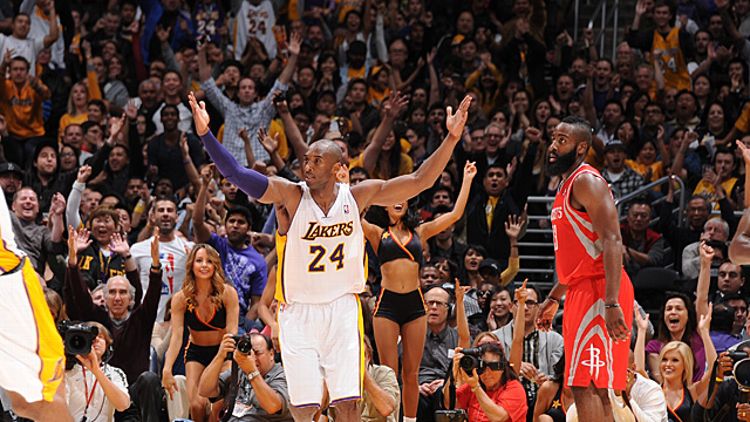 How many adjustments does a team need to make before you just throw up your hands and call it broken? If you read any of the papers in Los Angeles or listen to any sports talk radio or scan through the dozens of purple-and-gold blogs, you’d believe there must be some master solution that will make all the Lakers’ disparate parts cohere into some unstoppable basketball force. Once Dwight learns to play with Pau, everything will be fine. Or once Nash learns to play alongside Kobe, the team will stop looking slow and confused on offense. Or once the bench players find their roles, the second unit will look like something more than five random dudes who happen to be standing on a basketball court together.

Up until last week, the dominant excuse/adjustment was something called the “Princeton offense,” which, due to its Ivy League origins and all the requisite unathletic associations, never sat well with the locals who had grown up with Showtime and Shaq. (As a side note, the Princeton offense was mostly a branding problem — if Mike Brown had just called it “the system” and not said a word about New Jersey’s capital of secret societies and lax bros, every sound bite about Princeton and the Lakers would never have existed. They still might have lost a ton of games under Brown, but he at least wouldn’t have been the guy who — gasp! — tried to get Kobe Bryant to play within something as uncool as the Princeton offense.)

Now that Mike Brown and Princeton have bowed out of the Lakers excuse show, the adjustment story has shifted over to Mike D’Antoni and his own system and what will happen when Steve Nash comes back from his injury. That particular story line won’t even get started until Nash comes back sometime next month, which will then set off its own little barrage of separate adjustment stories. And ad infinitum till the Lakers either win or, more likely, do not win the NBA championship.

It’s been said before, but the problem with the Lakers doesn’t have to do with adjustments or systems or the dicey proposal of getting four separate big egos to work together within some quasi-Buddhist harmony concept. There is no perfect or even imperfect circle, no Zenny epiphanic moment. The problem with the Lakers is actually much more simple. They are really, really, really, really slow. And in that way, it doesn’t matter if the run-happy Mike D’Antoni might seem like one of the most counterintuitive choices to be the coach for this team. Because even if D’Antoni had been the architect of a system called “17 Seconds or More,” he wouldn’t be able to change the fact that pretty much every other elite team in the league — save the Celtics — will run the Lakers off the court in a seven-game series.

Pau Gasol has taken most of the heat for his terrible defense, and it has been deserved. He has been absolutely atrocious and looks more lost than usual, especially when he’s forced to defend someone who can knock down a mid-range jump shot. But Metta World Peace and Kobe Bryant have also been remarkably bad on the defensive end of the court, and while a healthy Dwight Howard could cover most of these deficiencies, this stiffer Dwight Howard hasn’t been able to stop teams from going hard to the basket. It’s true that the Lakers’ overall defensive numbers aren’t that bad, but they’ve also only played two good teams in their first 10 games, and 20 percent of those defensive minutes were accrued in two absolute stinkers against the Warriors and the Pistons. In their last two wins, the Lakers let the Suns and the Rockets score five and nine points above their respective season averages.

One of the complaints about Mike Brown was that he, a defensive-minded coach, couldn’t even get this Lakers team to play well on that end of the court. But I think it’s much more probable that the team failed on defense despite Brown’s coaching. They simply don’t have the horses to be a decent team defensively, especially in transition. Yes, they should be given time to adjust, but every team in the league had to deal with roster changes. The Lakers, if nothing else, are still behind the curve. And despite their glut of talent, there’s no compelling reason to think that an old, slow team will somehow overwhelm their considerable problems.

If the Lakers are going to beat anyone in the playoffs, they will have to do it on the offensive end of the court, where they still have the potential to be a juggernaut. But as Zach Lowe has pointed out several times this year, there’s a historic limit to how well an offensive-minded team can do in the playoffs. This team will improve and certainly finish better than their current .500 record, but it’s hard to see how the Lakers will get past the speed of the Nuggets or the Clippers, the Joga Bonito Spurs, the defensively stout Grizzlies, or even the suddenly pedestrian Thunder. They certainly could beat one of those teams in a seven-game series, but it’s impossible to believe, at least at this point, that they could beat all four.

Last night against the Rockets was supposed to be the first game of the new adjustment to the old adjustment, but D’Antoni’s bum leg delayed his Lakers debut. True to form, the Lakers looked great on offense and slow in transition. On five separate occasions in the first half, the Lakers got beat down the court after made baskets. Pau looked about as lost as he has all season on defensive rotations. They made up for it by playing arguably their best offensive game of the season.

• Darius Morris scored 12 points last night and appears to be the Lakers’ short-term answer at point guard. The Lakers ran out to a half-time lead by shooting well from the perimeter. If Morris can provide any sort of reliable shooting from the perimeter and keep defenders honest, he shouldn’t hurt the Lakers too much. At the least, he’s not much worse than Steve Blake.

• Jeremy Lin must have worked a lot on his jump passes this offseason. Last year, when he got around his defender on the pick-and-roll, he’d put up a floater or take it all the way to the rim. This year, he seems to be swinging the ball to open shooters in the corner. This is certainly sound strategy, but it also takes away Lin’s greatest strength, which is getting into the lane and finishing.

• There should be more written about Kobe Bryant’s remarkable play this season. The Mamba hasn’t lost a step since last season — if anything, he seems energized by not having to carry so much of the offensive load. If there were a non-Lebron MVP category, Kobe might win it this season. He’s shooting well over 50 percent from the floor. With fewer WOOBLYs, more open looks from beyond the arc, and selective Mamba-ing, he’s heading toward arguably the best season of his career. What happens if he ends the season around 48 percent and finishes in the top three in scoring?

• The Lakers need to trade Pau Gasol. He’s still one of the most skilled big men in the league and could contribute to any number of teams. But he just doesn’t fit on the Lakers, and given the impatience of Lakers fans with Pau excuses, it’s probably time for him to go. This probably won’t happen, mostly because the last thing the forever-adjusting Lakers need is another wrench thrown in the gears. The only way Pau gets traded is if the Lakers are still hovering around .500 near the trade deadline. It’s also hard to figure out a way a team could take on Pau’s $19 million salary without going way over the tax. A Joakim Noah–for-Pau trade couldn’t happen without a third team getting involved. The Cavs could send Anderson Varejao and the last year of Boobie Gibson’s contract to Los Angeles for Pau, but that’s probably not enough of a haul to sway the Lakers.