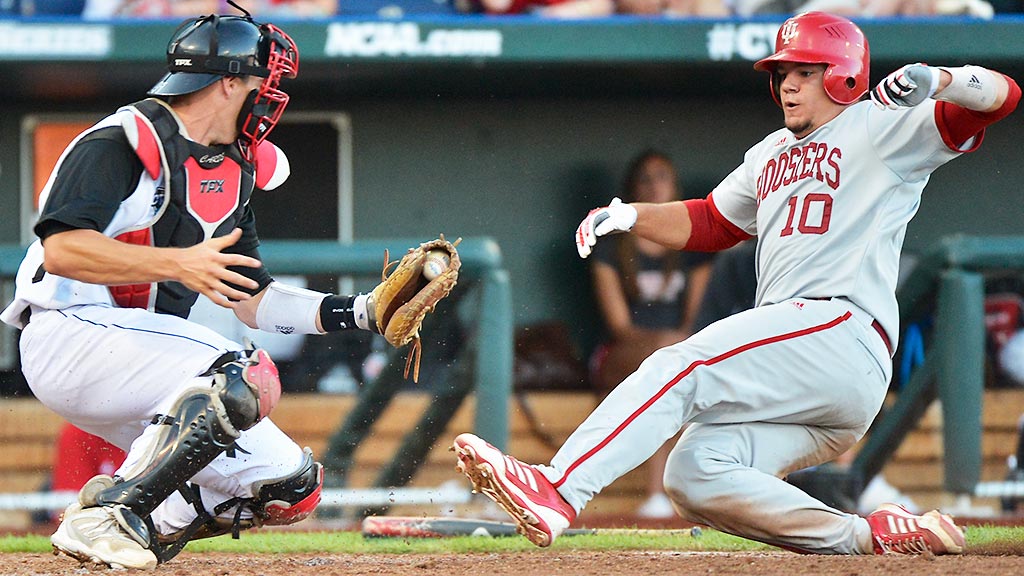 Have you ever asked a question and, a fraction of a second into hearing the answer, felt like an idiot for failing to figure it out on your own? If you ask Indiana catcher Kyle Schwarber which major league hitters he admires, that’s how his answer will make you feel.

“I grew up a Cincinnati Reds fan, always watching Joey Votto play and hit,” Schwarber says. “It’s funny: As you grow up, you kind of just watch the games, and once you get into college, you really start paying attention. It’s amazing what he does at the plate with his approach, and how he wants to get his pitch.”

Schwarber, a left-handed power hitter, grew up in southern Ohio and attributes his success as a hitter to his selective approach. The Votto reply seems almost too obvious.

“I really like to think I’ve got a good approach at the plate,” Schwarber says. “I really hunt for my pitch … I feel like you’re going to get one or two pitches per at-bat and you really can’t miss those pitches.”

Schwarber, who might be the top college bat in the upcoming June 5 MLB draft, hasn’t missed much this season. He has walked 41 times against 27 strikeouts and leads the Hoosiers with a .623 slugging percentage. Of his 73 hits this season, 32 have gone for extra bases.

Indiana head coach Tracy Smith saw that potential in Schwarber even when the latter was an undrafted high schooler.

“The ball sounded a little different coming off his bat,” Smith says. “He’s got a football background, so that was something that was attractive always to me.”

It’s easy to see where the power comes from: Schwarber was a second-team all-state middle linebacker in high school in a state that’s known to produce the occasional quality linebacker. And at 6 feet, 240 pounds, Schwarber still looks the part. He’s not tall or pudgy, but he’s wide, with the kind of broad shoulders and thick legs that must make suit shopping a nightmare. He hits from a deep crouch, and when Schwarber chooses to swing, he gets his money’s worth.

In today’s game, that makes Schwarber a bit of an outlier. You might remember the Gorilla Ball era of the late 1990s in college baseball, when space-age metal bats turned the sport into a home run derby. In 1997, LSU hit 188 home runs in 70 games. A year later, Wichita State averaged more than 12 runs a game. This isn’t the case anymore, as the new BBCOR bats introduced in 2011 returned the college game to the dead ball era. Most college hitters are aggressive, and most college managers take their offensive tactics from the 1920s.

Amid widespread slap-and-run small-ball tactics, Schwarber looks different. He hits the ball harder and works the count better than almost anyone else in the college game. At his best, he looks like the kid on the Little League team who got held back a year.

As the draft nears, the question for scouts and prognosticators is whether Schwarber can catch. He isn’t any bigger than, say, Jose Molina, but in addition to that football player’s body, he’s got a so-so release and throwing arm. The physical hallmarks of a good catcher — quickness, agility, flexibility, arm strength — don’t tend to improve with age, particularly under the stress of squatting hundreds of times a day with a body that big, and the Indiana junior is already 21. (My personal belief is that concerns about Schwarber’s athleticism are overstated because he looks a lot like Joe Blanton in the face, but I’m not a scout.) ESPN’s Keith Law, MLB Draft Insider’s Chris Crawford, and Baseball America all have Schwarber ranked in the late teens to early 20s on their boards, but if a team believes wholeheartedly that Schwarber can take that power and on-base potential and remain at catcher, he could go in the top 15.

If Schwarber goes anywhere in the top 25, though, he’ll be Indiana’s highest draft pick since 1966. And even though he stands to become a millionaire overnight, Schwarber is almost adamantly unperturbed by the looming potential of professional stardom and the doubts of scouts and talent evaluators.

Before the season, Crawford wrote that speed is “not a part of Schwarber’s game.” While he might not run that well, Schwarber is the Billy Hamilton of deflecting attention from his draft prospects and back toward Indiana baseball.

“It’s always been a dream, but that dream can’t come true without the people I’m playing with here at Indiana,” Schwarber says. “I’ve got a great group of teammates, but if I don’t have people behind me, if I don’t have people hitting in front of me, it could be a whole different story. I credit my success to them. It’s really a team deal here.”

Schwarber’s not merely being humble. He shares a lineup with Big Ten Player of the Year Sam Travis (.342/.408/.561) and senior third baseman Dustin DeMuth (.381/.455/.541), who had at one point this season reached base in 45 consecutive games. Those three, along with senior left-hander Joey DeNato, represent the core of the first national powerhouse the Big Ten has produced in ages, one with designs on a return trip to the College World Series in Omaha. For now, that’s where Schwarber is focused.

“That’s our ultimate goal, to get back there,” Schwarber says. “It was great to be out there and experience that. It was the best experience of my life.”

Indiana struggled during a grueling nonconference schedule, but finished the regular season 21-3 in the Big Ten, ran the table in the conference tournament, and turned the nation’s second-highest RPI into the no. 4 overall seed in the NCAA tournament, which starts Friday. The Hoosiers won’t have to leave Bloomington until the College World Series itself. While Schwarber and the Hoosiers treated last year’s run to Omaha as a coming-out party, Schwarber has the capacity to give the world a second look later this June.

“He’s the heart and soul of what we’re doing,” Smith says. “Players like this only come around so often.”

The Weirdest of the Weirdos: Manu Ginobili and the Spurs' Exception to Their Rules