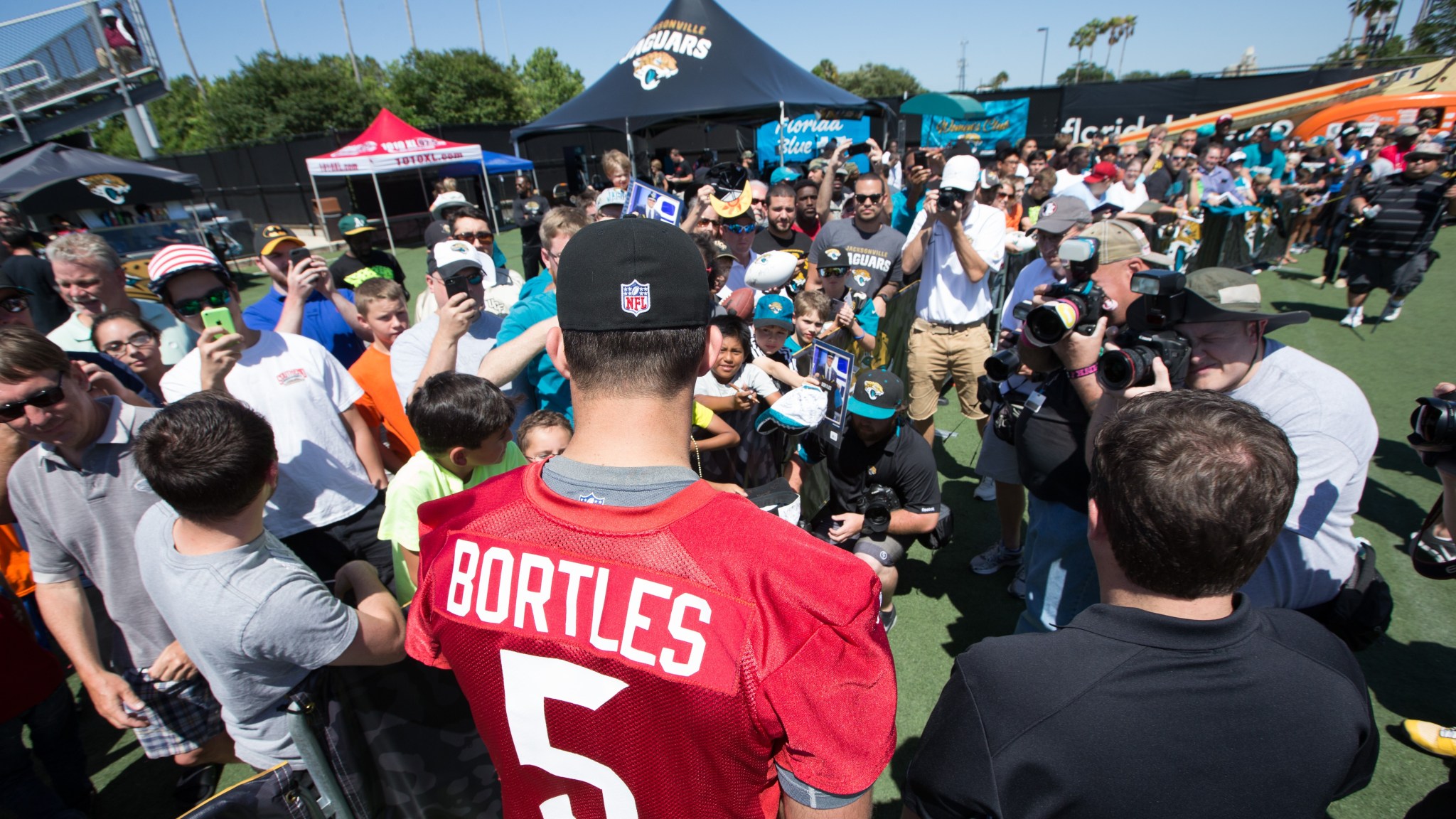 A few days before the conversation about Johnny Manziel turned to his vacation habits, Browns coach Mike Pettine told reporters that he expected a real competition for Cleveland’s starting quarterback spot. Declarations like this aren’t new to late May. Lately, they’ve been used mostly as a way to tell month-old NFL players that jobs won’t be handed to them. Two months later, those jobs usually are. If a team drafts a quarterback in the first two rounds these days, there’s a good chance he’s going to start. But with this class, it’s starting to sound like coaches are actually committed to holding off.

Jim Trotter said last week that it would take “something catastrophic” for Derek Carr to bypass Matt Schaub in Oakland this year. The Jaguars have already come out and said they want Chad Henne to start all 16 games. Right now, it seems like Teddy Bridgewater is the only rookie quarterback with a clear path to be his team’s starter, thanks in part to the Vikings not having another choice.

If the Browns, Raiders, and Jags actually do keep their highly drafted QBs on the sideline all year, it’ll spark a debate that’s been dormant for a few years now. Since 2011, only three quarterbacks drafted in the first two rounds haven’t spent their rookie seasons as their teams’ primary starters: Colin Kaepernick, Jake Locker, and Brock Osweiler. Locker’s time on the sideline was because of injury, and the 49ers and Broncos each won 13 games in the year their quarterbacks were drafted. They weren’t exactly in a hurry.

There are plenty of reasons for this. With the new CBA, quarterbacks drafted in the first round are notably cheaper. Teams are better served, like Jacksonville was, to see as quickly as possible whether their top-10 pick can actually play. If he can’t, they can move on from him in three short seasons, just like the Jaguars did with Blaine Gabbert. Another issue is the time allotted to a team’s front office. The personnel team last year in Cleveland didn’t even have a chance to pick their own quarterback before getting shipped out of town. If a team needs a quarterback early, there’s a good chance that team is flailing, and flailing GMs aren’t usually served by putting that quarterback on the bench for a season.

What should matter is whether playing or sitting a rookie quarterback actually gives teams an advantage in the long term. The answer to that, based on the careers of the 64 quarterbacks taken in the first two rounds from 1999 through last season, isn’t simple.

In trying to figure out whether a redshirt year actually helps a rookie quarterback, I sorted each of them by the combined Pro-Football-Reference Approximate Value they had in their second and third seasons. The goal was to see whether most of the better quarterbacks in Years 2 and 3 started a majority of their games as rookies.

The results were mixed. Daunte Culpepper, Cam Newton, and Carson Palmer were all tied at the top with 32 AV combined in Years 2 and 3. Newton and Palmer were both primary starters as rookies. Culpepper spent his first season backing up Jeff George. Eli Manning, Kaepernick, and Donovan McNabb were all first-year backups who finished among the top 10, while Joe Flacco and Matt Ryan are still two of the best arguments for throwing rookies into the fire. There are a few examples that skew the results a bit. Andrew Luck has played only two seasons, but if he matched his Year 2 total next year, he’d be in the top five. Philip Rivers wasn’t a starter until his third season, but that season was one of the best debuts by any quarterback in NFL history.

The point is that based on performance, there’s really no straight answer to which route ends up making for better quarterbacks. Matt Leinart and Brady Quinn are tied near the bottom with 3 AV each. Leinart got the reins as a rookie. Quinn didn’t.

Another element that the Jags, Raiders, and Browns are obviously taking into account is whether a rookie quarterback gives them the best chance to win more games now. None of these teams is in line to compete for a Super Bowl, but there’s something to be said about maybe staying a bit more competitive while your rookie quarterback gets a chance to learn.

The numbers there are about as helpful as they are with individual quarterbacks — so, not very. Since 1999, the teams that have sat their first- or second-round rookie quarterback for a majority of their games have won an average of 7.32 games. Teams that start theirs have won 7.16. It’s not a considerable difference, and each group has its share of extreme examples that might push the numbers one way or the other. I already mentioned Kaepernick and Osweiler, and the rookie starters group has Roethlisberger’s 15 wins in 2004, which were mostly the product of an all-time great defense.

It isn’t the most exciting conclusion, but I’d say that from these examples, it looks like a quarterback is going to succeed independent of whether he starts as a rookie. Situation seems to have more of an impact than time spent on the bench. Daunte Culpepper walked on to a team with Cris Carter and Randy Moss. That probably mattered more than learning the professional ropes from Jeff George. Carson Palmer went from 60.9 percent completions and a dead-even touchdown-to-interception ratio as a rookie to 67.8, 32 touchdowns, and 12 interceptions in his second year. In his case, spending 16 games getting a feel for professional football apparently helped.

There isn’t a right choice, and as teams do their best to spin the one they make over the next three months, that’s worth remembering. Whether Manziel, Bortles, and Carr are ready to start as rookies is one thing. Knowing there’s no defined path that will turn them into quality, long-term starters is another.