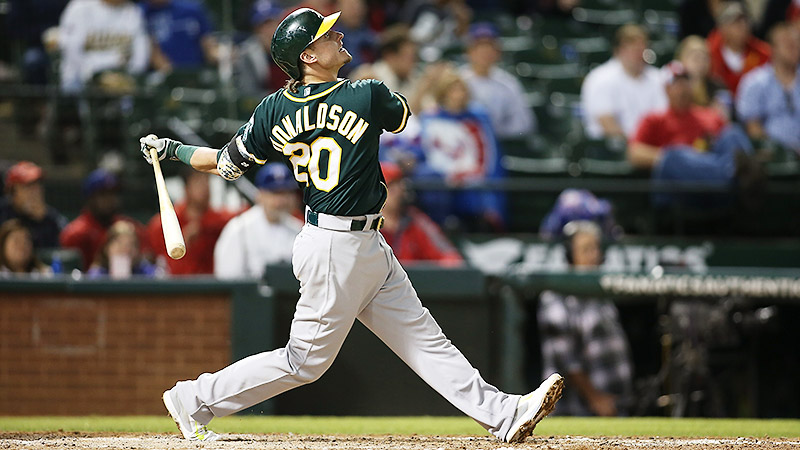 After consuming some Prestige Television this past Sunday night, I clicked over to SportsCenter before going to bed and was treated almost immediately to a segment on the dominant Oakland A’s. This bit was introduced and narrated by the venerable Stuart Scott, who set up his commentary with the following monologue:

“Come on. That’s funny — very funny. And by the way, I was in Moneyball, too, I’m just saying. Seriously, name a real A’s star right now. It’s tough, right? Yoenis Cespedes? Sure, I mean Oakland fans know him. But who else? Well, people should. This A’s team has won two straight divisions and eight of the last nine games this season.”

Even the Moneyball A’s had stars in Miguel Tejada, Eric Chavez, and those three starting pitchers, but a decade later, Oakland has turned into an oubliette for baseball celebrity, an egalitarian utopia in which there are neither stars nor scrubs, but only 90-win seasons and division championship banners. While the Phillies, Angels, and perhaps eventually the Yankees wade through the waste and carnage of the failure of brute economic force, Oakland keeps chugging along as the kibbutz, a thriving socialist conclave succeeding on its own terms out of sight.

Oakland has good players, of course, but they’re middle relievers. Or they’re players like Jed Lowrie and Coco Crisp, whose production outstrips their reputation. Or they’re young pitchers like Sonny Gray, and given the rash of severe injuries to young pitchers — not least of all Oakland’s — we know better now than to fall in love with those.

It’s a clever narrative, but I don’t grant Scott’s premise. If the A’s don’t have a star, it’s only because we’ve yet to decide that Josh Donaldson is one.

I get why Donaldson, who hit .310/.379/.522 in the first half last year, wasn’t immediately feted as one of the best players in the game. As a 27-year-old in his first full season as a starter, Donaldson sure felt more like a fluke than a real breakout star, and it’s probably wise that we’re collectively a little more conservative in our expectations in cases like this. Most of the time, when someone who’s never been good before puts up superstar numbers for three months, those numbers go away.

But it’s been a full season and change, and Donaldson has slipped only marginally. He hit .286/.391/.466 in the second half, and in 44 games this year, he’s hitting .274/.358/.508 while playing above-average defense at third base by all advanced metrics. It’s also important to note the run environment in which Donaldson is putting up those numbers. The early 2010s have been the era of swing-and-miss, an inhospitable time for hitters. The average slash line in the American League this year is .253/.322/.396, while in 2001 it was .267/.334/.428. On a league-average basis, 40 points of OPS is a huge drop-off, and after a couple decades of PED and expansion-fueled offensive explosions, we still haven’t adjusted our mental baselines to account for a .300 OBP being serviceable and a .400 OBP being more rare than good Italian food west of the Appalachians.

Moreover, Donaldson is putting up those numbers in a ballpark that has more foul ground than Delaware and suppresses runs like a fistful of Imodium. When examining holistic offensive stats like OPS+ or wRC+ that take park factors into account, Donaldson’s offensive output since the start of 2013 is comparable to Joey Votto’s, The Mighty Giancarlo Stanton’s, and Jose Bautista’s. We’d call all of those players stars, and none of them plays Donaldson-level defense at a position as tough as third base.

Last year, Donaldson finished fourth in the AL MVP race behind Miguel Cabrera, Mike Trout, and Chris Davis. In terms of sheer production, Donaldson absolutely belonged in that group, and with every day that his OPS+ hovers around 150, it becomes more likely that his bat is for real. And while Donaldson excels at defense and on-base ability — the province of the underrated player — he still hit .300 last year, with 64 extra-base hits. He’s not exactly hiding.

Of course, numbers aren’t everything, and sometimes a player will elevate himself to star status by force of personality or charisma. It’s not like Donaldson is a nonentity in that arena, though. He was a sandwich-round pick in 2007, chosen 48th overall ahead of TMGS, Jonathan Lucroy, and Matt Harvey, among others, so he has the first-round pedigree. Donaldson also makes spectacular daredevil catches like Derek Jeter. He wears what is perhaps the most distinctive haircut in baseball, a combination Mohawk and mullet that’s a living testament to this line from Bull Durham: “Your shower shoes have fungus on them. You’ll never make it to the bigs with fungus on your shower shoes. Think classy, you’ll be classy. If you win 20 in the show, you can let the fungus grow back and the press’ll think you’re colorful. Until you win 20 in the show, however, it means you are a slob.”

Donaldson’s been producing well enough for long enough now that it’s safe to believe in him. He’s the best player on what is probably the best team in baseball. Maybe the A’s-as-paragon-of-distributive-justice narrative squashes the potential of any one player to be elevated to star level. Certainly, playing in Oakland doesn’t help. As an East Coast guy, I’ll admit that if Donaldson played just about anywhere else, he’d be on Subway commercials by now. But in the era of MLB.TV and Baseball Tonight, geography is no longer an excuse.

That Donaldson hasn’t been elevated to star status in the public consciousness is inexplicable, and it’s our fault. So spread the word. Maybe the next time the Athletics come up on SportsCenter, the segment intro will go like this:

“Quick, name a star on the Oakland A’s. Josh Donaldson, you said? Yeah, that guy’s the fuckin’ man.”

Michael Sam's Reality Show vs. the Reality of the NFL