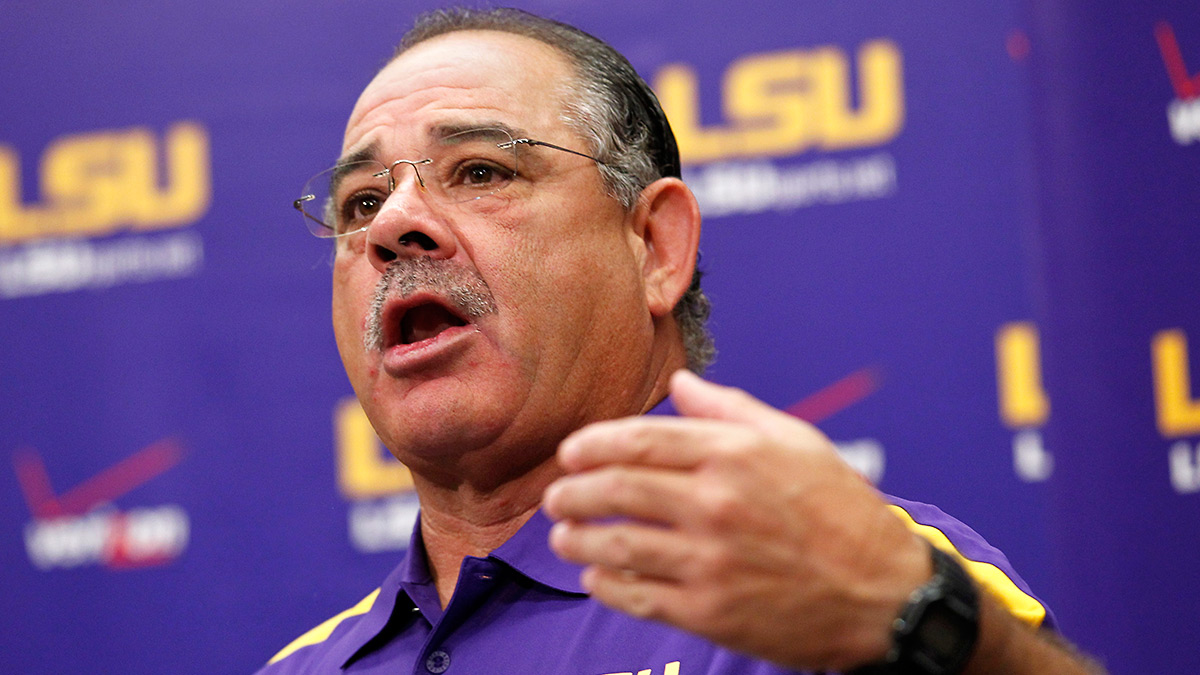 In the SEC, an assistant football coach’s lifespan tends to unfold in Hobbesian terms: It’s nasty and brutish, with an emphasis on short. Even for the few who manage to survive the annual winter cull, the end can be especially nasty when it finally comes.

Take longtime SEC defensive coordinator John Chavis, who recently caused a stir by leaving LSU for Texas A&M. Amid an otherwise placid offseason for the conference, divorce proceedings in Baton Rouge have sated the appetite for sordid behind-the-headset drama, with Chavis filing a lawsuit against his now-former employer for allegedly altering the wording in his contract without his knowledge1 and withholding more than $200,000 in scheduled vacation pay and bonuses.2 LSU countersued, accusing Chavis of breach of contract for allegedly contacting recruits in January on behalf of A&M despite still being employed by LSU. That the imbroglio concerns two budding division rivals has only added to the squall.

To the rest of the country, a career assistant who gives off an unmistakable Wario vibe might seem like an improbable candidate for contentious six-figure intrigue. But while Chavis has never been a head coach — and, at 58 years old, probably never will be — he has carved out the kind of niche his well-traveled SEC peers can only envy: At 26 years and counting, “The Chief” is easily the longest-tenured coach in the conference, regardless of job title, and he spent all of those years at just two spots, Tennessee (1989-2008) and LSU (2009-14), before leaving for A&M. For some context: In the same span, 12 of 14 current SEC schools have burned through at least four head coaches, with the other two churning through three. The only other active SEC coach who was employed in the league when Chavis was promoted to defensive coordinator at his alma mater, in 1995, is Steve Spurrier, whose two-decade SEC tenure at Florida and South Carolina was interrupted by his ill-fated interlude in the NFL in 2002-03. In a frenzied time lapse of regional coaching traffic, Chavis would be the car that never leaves the garage.

In such a dog-eat-dog ecosystem, that kind of longevity is no happy accident. Which may be why, out of the dozens of obscure assistant coach moves this offseason, the Chavis defection is the only one that seems less like a footnote than a potential game changer. Even if Chavis’s motivations for moving were more contractual than aspirational, it’s not hard to imagine that after watching his team finish unranked in 2014 despite fielding the no. 1 total defense in the nation’s most competitive conference, he’s calculating the impact that defense could make when paired with an offense that can actually be counted on to score some damn points.

Not that LSU has ever lacked for offensive talent: The 2013 attack produced eight NFL draft picks, including rookie revelations Odell Beckham Jr., Jeremy Hill, and Jarvis Landry, and the 2015 offensive depth chart boasts the most obscenely gifted back in the college game, Leonard Fournette, among other blue-chip contributors.3 But blue-chip credentials haven’t consistently translated into results. The Tigers failed to crack 20 points per game in conference play last year, and in all games, they finished 13th out of 14 SEC teams in scoring offense, a new low after coming in eighth or worse in 2009, 2010, and 2012. And barring a major, unforeseen revelation behind center, LSU is facing at least one more year of the same dysfunctional quarterback situation that kept last year’s attack moored in the conference basement.

Meanwhile, Chavis’s unit ranked in the league’s top three in scoring defense every year of his LSU tenure except 2013, when it ranked fourth. After a shaky start, the 2014 edition rebounded to finish in the top 10 nationally in both yards and points allowed, ultimately turning in the Tigers’ best showing under Chavis in both categories since the loaded4 2011 outfit that annihilated all comers en route to the BCS title game. Still, there was an enormous gap between that team, which was perfectly calibrated for the era of Ess-Eee-See Defense and winner-takes-all 9-6 slugfests, and the team that limped to an 8-5 finish last December. Even at its best, LSU’s throwback offensive philosophy under Les Miles and offensive coordinator Cam Cameron leaves such little margin for error that anything less than a historically dominant defense leaves another championship run effectively out of reach.

Texas A&M turned in an identical overall record in 2014 and finished a game back in the SEC West standings after dropping a 23-17 decision to LSU in the regular-season finale.5 If the remaining pieces fall into place, though, A&M’s 2015 ceiling is considerably higher than LSU’s, largely because the Aggies have so much room to grow on both sides of the ball. By the end of last season, a significant chunk of A&M’s starting lineup was occupied by touted freshmen, most notably quarterback Kyle Allen, the no. 1 passer in the 2014 recruiting class, who did nothing to diminish the hype after taking over as the full-time starter in November. The same can be said for receivers Ricky Seals-Jones (49 catches for 465 yards and four touchdowns) and Speedy Noil (46, 583, 5), both of whom justified five-star accolades while barely scratching the surface of their potential in their first full year in the lineup.6 Another five-star receiver, incoming freshman Christian Kirk, is already on campus this spring, giving Allen arguably the most physically gifted set of targets in the nation this side of Alabama’s.

And unlike his counterparts at LSU, A&M coach Kevin Sumlin has consistently shown that he knows how to use those offensive weapons. On paper, the team’s final numbers in 2014 marked an obvious regression from the Manzielian heights of 2012-13, albeit a predictable one given the extreme youth at key positions and the midseason bust of Manziel’s designated successor, Kenny “Trill” Hill, the catalyst for Allen’s premature promotion.7 Even in an undeniable down year, though, the Aggies averaged 35.2 points per game, roughly identical to LSU’s output in its best years. Given how much of last year’s total offense was generated by players who’ll be back this fall (75 percent), and how many of those players were inexperienced first- and second-year comers, it’s easy in retrospect to paint 2014 as a minor blip in A&M’s transition from one prolific iteration of the Air Raid to the next.

From the perspective of a defensive coach, especially one like Chavis who has spent so many years trying to keep one-speed offenses out of holes they have no hope of escaping, the prospect of working with a cushion on the scoreboard must look like a refreshing opportunity. The change will undoubtedly be as exciting for the Aggies as for Chavis: Under Sumlin, Texas A&M’s defense has been the most generous in the league, with the Aggies ending 2014 on the opposite end of the ledger from Chavis’s top-ranked unit at LSU, yielding more yards per game than any other SEC defense for the second year in a row. But youth was a central theme in that struggle, too — the two best players on the defense for most of the year, defensive end Myles Garrett and safety Armani Watts, were both true freshmen — and three banner recruiting classes in as many years have left the depth chart stocked well enough for an abrupt leap forward under Chavis’s tutelage. Statistically, the nature of Sumlin’s pedal-to-the-metal philosophy on offense probably ensures that Chavis’s defenses in College Station will never measure up to his best efforts at LSU. (Quality notwithstanding, Texas A&M’s defense was on the field for 147 more plays than LSU’s last year, or about 11 more plays per game, a direct result of playing opposite an offense that pushes the tempo.) But it also means they will rarely be asked to. 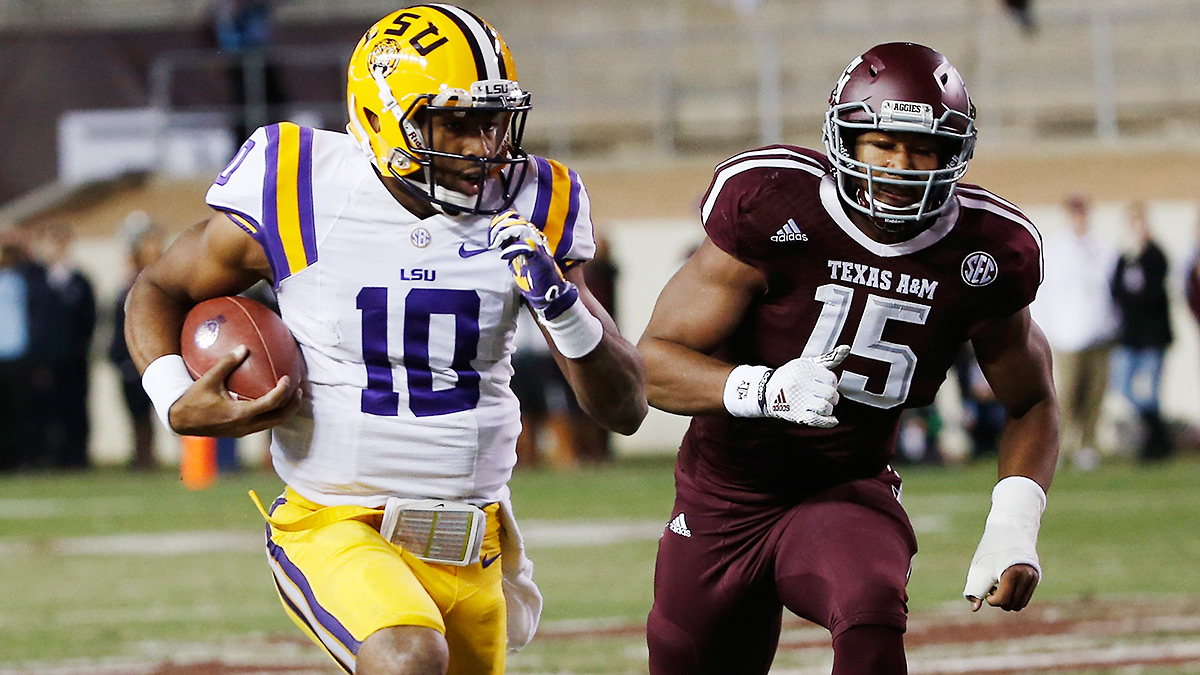 “To be quite honest with you, we’re building to win championships. That’s what it’s all about. I want to be a part of a championship program,” Chavis told reporters earlier this month in his first public statement as an Aggie. “We’ve got talent, there’s no question about that. The first thing we need to do is get our guys confident that they’re good enough to play and good enough to win in the SEC. Once they feel that way — and I think we’re well on the road to being there — they’re going to be able to compete. … Now we’ve got a lot of work to do, don’t kid yourself. I’m not kidding myself. But the talent is here and we’re going to put the work in.”

We shouldn’t kid ourselves, either: Even assuming that Chavis is able to elevate the defense to a level more on par with the SEC average, there’s still an argument to be made that the offensive dip in 2014 runs deeper than a temporary, post-Manziel hangover, and might turn out to be a sobering reality check about the limits of Sumlin’s system without a once-in-a-generation star behind center. More broadly, there’s also the question of whether a truly first-rate defense is compatible with the pace or culture of the spread revolution; of the small handful of nouveau riche outfits that have parlayed prolific, up-tempo offenses into sustained national success — Oregon, Baylor, Oklahoma State — none has managed to pair blistering point totals with the kind of stifling, championship-caliber defense that has traditionally defined the sport’s elite. For Texas A&M, merely breaking through in the parity-driven tinderbox that is the SEC West is daunting enough.

Then again, in the age of the spread, maybe the bar for what qualifies as a championship-caliber defense is being steadily redefined downward, as Ohio State (19th nationally in total defense), Florida State (63rd), and Oregon (89th) proved last year en route to playoff bids. Statistically, Chavis’s LSU defense outperformed all of the above, as well as SEC champ Alabama, and yet capped its season in the Music City Bowl. Texas A&M doesn’t necessarily need to replace the Tigers in the defensive rankings to make a major move in the standings: If the offense lives up to its potential, the bar for a defensive breakthrough might fall nearer to the middle of the pack — a significant improvement compared to the league basement, but hardly unattainable under a proven coordinator. These days, the old cliché about defense winning championships is looking a little rough around the edges. But as Chavis may be counting on, another chestnut is holding up just fine: More than ever, the best defense is a good offense.