Jarvis Jones and the Latest Case of the NFL Draft’s Tape-vs.-Workout Debate 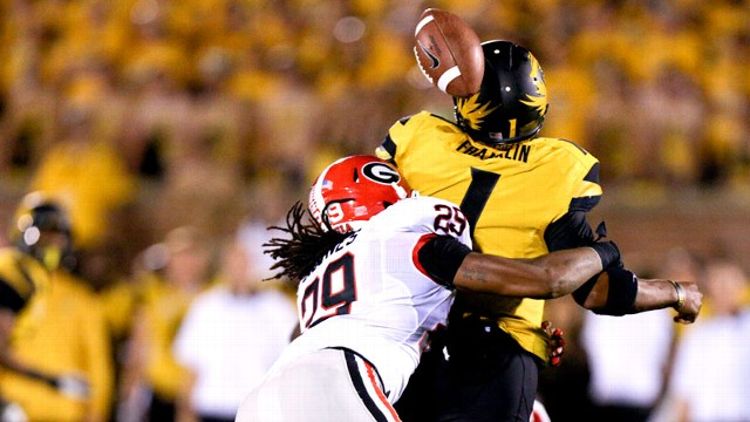 Every year, as the NFL draft process drags on, a handful of players spark the same conversation about what evaluators should trust. Most often, they’re debates about the importance of 40 times or three-cone drills compared to what a player has put on film during three or four years of a college career. The consensus is often that the latter takes precedence. Few positions in the NFL are ever required to run far in a straight line, and if the tests and the tape have disparate results, falling back on 30 games is safer than falling back on 40 yards.

There are cases, though, when the stopwatch has been enough to scare teams off. Terrell Suggs’s final season at Arizona State included 24 sacks, still an NCAA record. When the draft process began that spring, Suggs was a top-five talent based on the film, but when he turned in a pair of 40-yard dashes in the 4.8 range, doubt started creeping in. Suggs went 10th overall to the Ravens, and we know what’s happened since.

This year’s version of that player is Georgia’s Jarvis Jones. In college, Jones was a two-time All-American and probably the best defensive player in a conference littered with them. He can rush the passer, track down ball carriers, and has a knack for big plays. There was a point, before players were putting on track spikes, when he was considered by some to be the best player in the draft. Now, at the end of March, a suspect 40 time and some medical concerns have some analysts projecting him in the bottom half of the first round.

The medical issues are where Jones’s tumble began. Originally committed to play at USC, Jones was diagnosed with spinal stenosis during his time in Los Angeles and wasn’t cleared to play. This led to him transferring to Georgia, where he was given medical clearance and went on to have an excellent career. There were reportedly some teams, though, that still had doubts about Jones’s medical condition going forward. A first-round pick’s success isn’t guaranteed under normal circumstances, and investing in a player with a chronic medical issue doesn’t help matters. In early March, Jones visited Craig Brigham, a Charlotte orthopedist, who concluded that Jones only had suffered a mild spinal-cord concussion, which had been resolved for some time. An independent examination by a player’s doctor of choice likely won’t change the minds of any teams that had taken Jones off their boards. But for those on the fence, further medical clearance could go a long way.

If the medical issues were Jones’s only problem, it’d be almost certain he’d be one of the draft’s first six picks. But the pre-draft stumble continued last weekend, when Jones turned in a 4.92 40-yard dash at Georgia’s pro day. Jones wasn’t expected to clock in anywhere under 4.7, but the 4.92 was a shock to some, like NFL Network draft analyst Mike Mayock, who said the time will likely raise concerns. The Suggs comparison is harder to make when you consider that Jones is 10 pounds lighter, ran slower, and supposedly had more positional flexibility than the Ravens pass rusher. Predominantly a 3-4 outside linebacker in college, Jones was drawing comparisons to Von Miller as a player who could fit multiple defenses and rush the passer from all over the formation. Jones lacks Suggs’s bulk and Miller’s elite athleticism, so the concern isn’t his falling between positions right now — it’s that he’s not falling into any of them.

Pass rushers are at a premium in the league, but this happens to be a draft full of them. Ziggy Ansah, Dion Jordan, Bjoern Werner, and Barkevious Mingo are all considered potential top-10 picks, and none have put up the sort of disappointing workout that Jones had in Athens.

Luckily for Jones, there are some players whose tape is just too good to ignore. Following the pro day, Raiders GM Reggie McKenzie told the Atlanta Journal Constitution, “You can never dispel what you see on tape.” Rex Ryan, head coach of the team picking ninth overall, was also in attendance (something tells me the Jets would rather have Terrell Suggs than Dewayne Robertson), and Jones has meetings set up with both the Lions and Eagles — each owners of a top-five pick. It takes one hell of a body of work to overcome a 40 time comparable to some of the draft’s top offensive linemen, but Jones has it. No one will know until draft day, but in this year’s battle between the clock and the tape, it’s looking like the tape just might win out. Then again, if it didn’t, there are some of us who wouldn’t mind all that much.