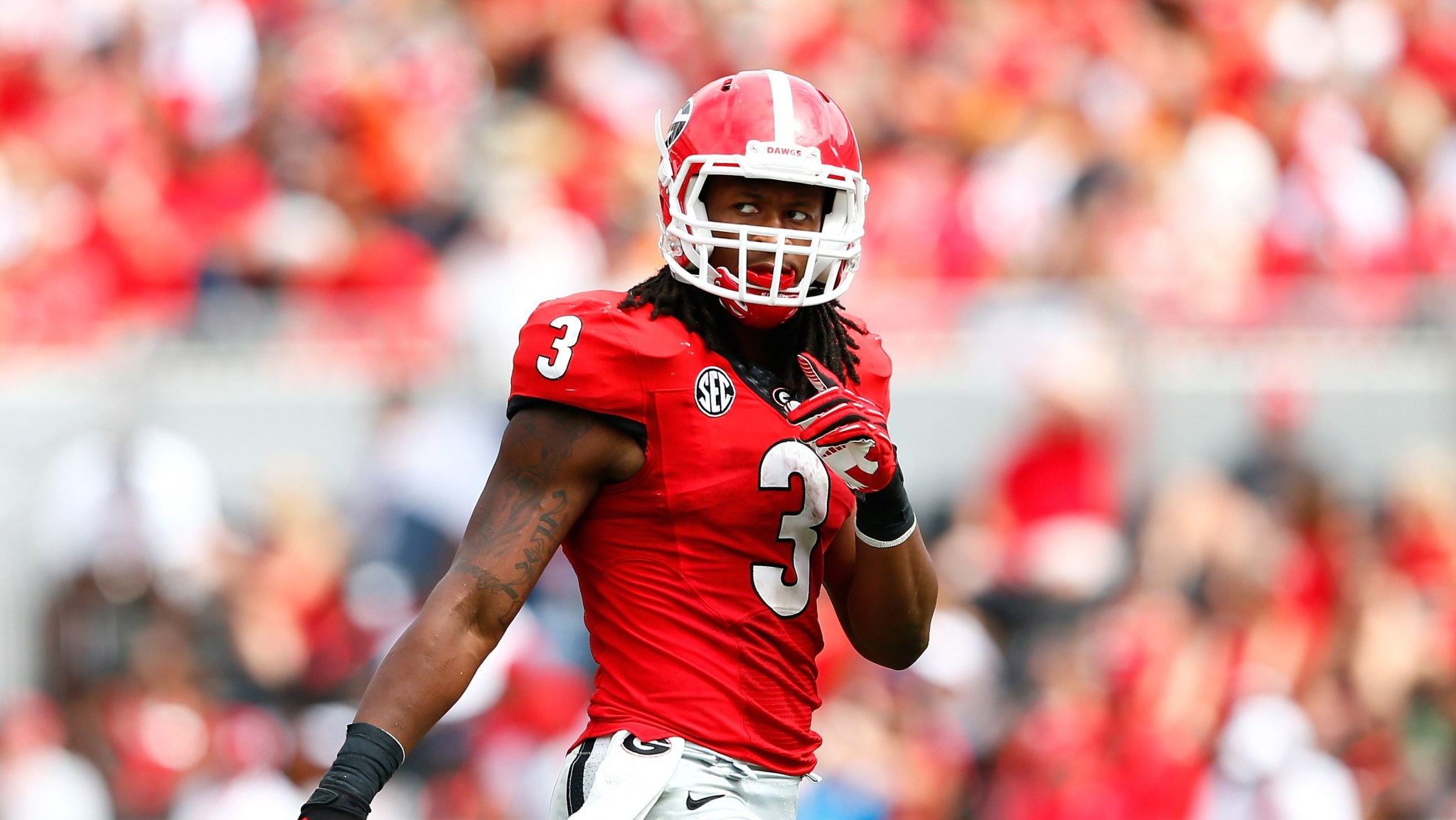 If you could have asked me yesterday to pick one college football player to NOT get suspended over some meaningless NCAA violation, it would’ve been Todd Gurley. He was my preseason Heisman pick and my nomination for the Triangle All-Stars. He’s so good that he’s done wonders for the name “Todd” AND the concept of being Gurley.

This is a dump truck of a human being who runs over people as a rule. Last week, I mentioned that he was averaging 12 yards per carry in the fourth quarter. Everyone but the defense he’s facing should want him on the field. Now, NCAA rules are threatening all that, because Gurley allegedly signed a bunch of Georgia merchandise for money and an autograph dealer turned him in to Georgia’s athletic department, forcing UGA and the NCAA to act. He’s suspended indefinitely as of Thursday night.

When the news broke, the reaction was reflexive. Time to get pissed off at the NCAA all over again. While Georgia and the NCAA make untold fortunes selling Gurley’s jersey and broadcasting his games on national TV every week, he becomes a villain for daring to make even a tiny fraction of that money for himself. We’ve made this argument so many times that it’s second nature now. Everyone has the Jay Bilas talking points down.

It’s all pretty depressing and familiar. But with Gurley’s story there’s a new twist. It feels like a turning point.

Right now, you can find a thousand people saying “FREE TODD GURLEY” and you’d be hard-pressed to find any college football expert saying he actually deserves to sit the rest of the year. As the story was unfolding on Thursday, the universal reaction was something like this: Todd Gurley should be able to make endorsement money anyway, and these rules make no sense, and the NCAA had better not suspend him for long.

The autograph dealer was apparently shopping the story to news outlets and on Reddit for the past 10 days, and nobody — not ESPN, Yahoo, CBS, SB Nation, or Sports Illustrated — bothered to follow up. Maybe they wish they had, but I don’t know. There’s just not a great market for this stuff anymore. Even Sports Illustrated’s Andy Staples, who broke the details Thursday night, felt compelled to almost apologize for it:

http://t.co/AsbXnOB50k has learned a person confirmed to Georgia compliance that he paid Gurley $400 to sign 80 items.http://t.co/sBEkkeYgNV

You guys know how I feel about that rule, but I figured you'd want to know what got all this started.

This is amazing to watch, especially for anyone who remembers how college football writers talked about Cam Newton, or Tony Dungy lectured Reggie Bush about the Heisman Trophy, or the Mario Puzo treatment Yahoo Sports gave to the Miami football program. Shrugs and calls for reform are not how college scandals are supposed to go. We’re supposed to get indignation, demands for tough punishment, and soliloquies about athletes having a responsibility to their teammates and their school. Even when Johnny Manziel was involved in his own autograph scandal last year, there were plenty of people trying to turn it into a much bigger mushroom cloud of betrayal. But none of that happened here. Instead of lectures, we’re getting something like progress.

This system is so stupid that nobody can pretend one college kid is a bigger problem than the rules running college sports.

It’s like when Sports Illustrated ran that massive five-part Oklahoma State investigation last year, with details of boosters and sex and academic questions, and … nobody really blinked. If anything, it was strange to write that much about rules violations without acknowledging how stupid the rules are. That’s where we are with Gurley now. What’s the point of focusing on autographs when he should be getting paid anyway?

You could call it naive to think that shifting opinion represents real progress — the rules still haven’t changed — but think about how cynical the NCAA is. It currently reaps massive profits from free labor every year. If allowing certain players to get paid by outsiders is the best way to preserve the system and quiet universal outrage, it’s only a matter of time before that happens.

Now we’ll wait to see what the NCAA does. It would be pretty shocking if Gurley were suspended for any meaningful length of time. Partly because there’s precedent with Manziel, but also because the NCAA has enough PR problems (and pending litigation), and suspending one of the three most famous college football players in America will do it no favors right now.

All I know is that I was all set to be depressed by the Todd Gurley story, but it’s actually been pretty reassuring. Nobody bothers to get angry about this stuff anymore. It won’t be much longer before the NCAA is the same way.

Autograph Dealers. Actually, one more thing on Gurley. The autograph dealer. I just want to say that every time I hear about some black-market autograph dealer, I imagine them as Comic Book Guy.

I don’t know why. I didn’t even watch The Simpsons that religiously. But every autograph dealer is Comic Book Guy. Keep this in mind when you read the email this guy was shopping around to news outlets.

Jets. It’s not even that much fun dealing with this team anymore. At least Mark Sanchez was entertaining. Geno Smith just makes everyone sad. You can already tell we’re going to be doing this for the next 18 months before everyone officially gives up on him. He missed a meeting Saturday night before Sunday’s game, blamed it on going to the movies and confusion over the time difference, and then played an atrocious first half to put a bow on everything. Meanwhile, Michael Vick openly admitted he wasn’t ready to play in the second half Sunday, something that would be understandable if he were a true backup. But people have spent the past few weeks openly wondering when the Jets would pull Geno, and Vick still couldn’t bother to prepare.

It’s been only five weeks, but every Sunday it’s a small miracle that Rex Ryan doesn’t quit right there on the sideline.

Your Horrifying NFL News of the Week. Right here.

Hockey Before Halloween. Sometimes it seems like the NHL is actively trying to make itself irrelevant. That said, on the local news last night they were running down highlights of the Caps game when the anchor announced rookie Andre Burakovsky’s first career goal. “He can’t even drink. He’s 19! … But he can visit the red-lamp district.”

Maybe October hockey’s not so bad after all.

J.J. Watt. Every week, any offense playing against the Texans comes into the game doing everything it can to contain J.J. Watt. And it feels like every week, it ends like this:

Is JJ Watt good? Because this seems pretty good pic.twitter.com/WPq38P3No7

It’s rare to have any athlete get this much hype and still deliver, but that’s what Watt is doing right now. Every week it seems like he ups the ante a little more. Through double-teams, ungodly amounts of cut blocks, and lord knows what else, he keeps tearing offenses apart. It’s all a good excuse to go back and read Robert Mays’s sit-down with him this summer. His interviews might be even more terrifying than his highlights.

Watching the Texans is never much fun because of Ryan Fitzpatrick and the offense, so hopefully we don’t have to watch them make a playoff run. The dream scenario is that the Texans go 7-9 this year but Watt is so incredible that we have to give him MVP anyway. And yes, this week he was so incredible that we can’t even complain about Thursday Night Football. Amazing.

Dez and Sammy. Speaking of barely human activity in the NFL … Just take a minute to watch the GIF of this Sammy Watkins catch in Detroit last week. Then watch this Dez Bryant catch in Dallas. Both of those plays basically won the game for their teams. With all the fantasy implications every week, and gambling, and X’s and O’s breakdowns, it can be really easy to forget just how ridiculous some of the NFL’s best players are. But those catches will remind you.

Chaos in the NBA. The NBA’s new TV deal could raise the salary cap by $30 million. It all but guarantees major CBA changes in two years, and it already has Mark Cuban threatening to abolish guaranteed contracts in exchange for any concessions. It’s unclear what real changes might actually come from all this, but it adds a whole new layer of drama to a sport that already provides just as much drama off the court as it does in games. If you hate this about the NBA, then you already didn’t like the NBA. If you love the NBA, though … the new TV deal just makes everything more interesting.

NFL Coaches Are the Finest Leaders This Nation Has. Great minds think alike. The greatest minds grab a shovel and get to work.

Dak Prescott’s Heisman Campaign. I saw the Photoshop for DAKNADO and was prepared to put this in the Worst section, but then I saw the posters for DAXTER and DAK TO THE FUTURE, and I realized I’d made a horrible mistake. Can’t wait for the Auburn game this weekend.

Gilbert Arenas Comeback? “I make 13 mil a year for the next two years, WHY the fuck would I mess that up,” he said in the Instagram comments. So, no Gilbert Arenas comeback. Now you know.

“I’m a rookie and I’m white, so people are going to attack me at all times,” he said this week. “Just coming out there in the game, I felt it right away.” This turned into a mini-controversy, which is stupid, because Stauskas is just being honest. Even Larry Bird said that he targeted white players when he played:

“The one thing that always bothered me when I played in the NBA was I really got irritated when they put a white guy on me,” Bird said. “I still don’t understand why. A white guy would come out (and) I would always ask him: ‘What, do you have a problem with your coach? Did your coach do this to you?’ And he’d go, ‘No,’ and I’d say, ‘Come on, you got a white guy coming out here to guard me; you got no chance.’ … For some reason, that always bothered me when I was playing against a white guy.”

Everyone knows white guys get targeted in the NBA. Stauskas is just admitting it and using it as motivation, which makes me love him even more than I already did. Speaking of which, DeMarcus Cousins catching Stauskas flexing on Instagram was the best thing on the Internet this week. Long live the future king of Central California. 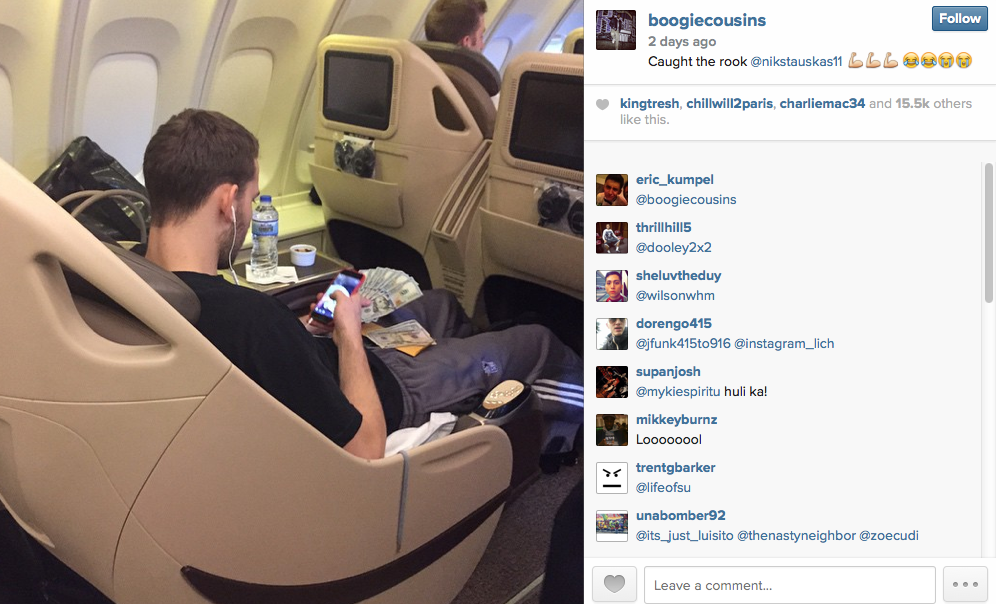