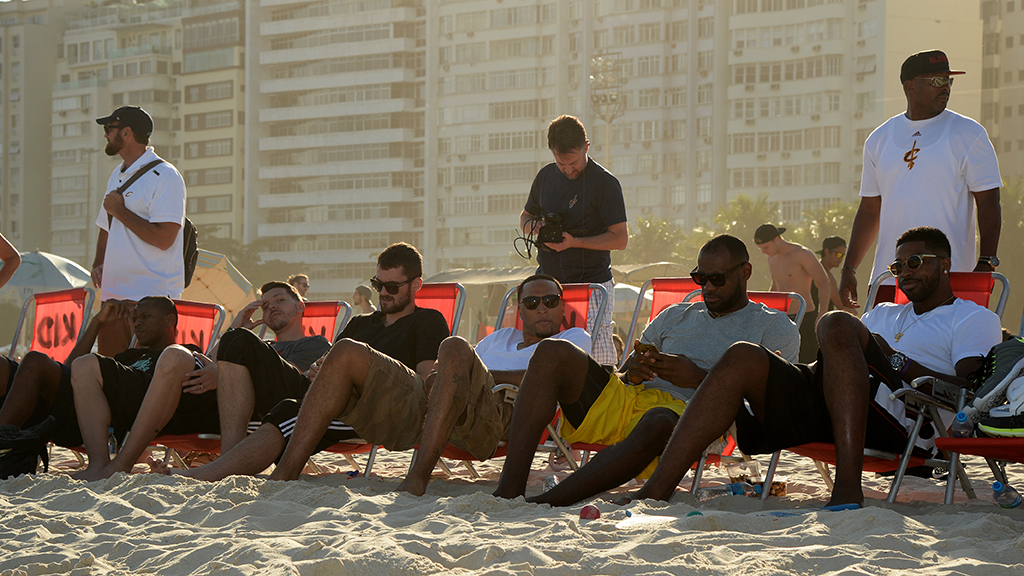 When we last left LeBron James and Dwyane Wade, they had just landed at Miami International Airport after a crazy week in Vegas and were engaged in deep conversation about … something. Alas, the details of this talk remain uncertain.

Were they discussing hair follicle regeneration? A bad beat at the poker table? The vagaries of the paleo diet? Your guess is as good as mine. In any event, LeBron announced his decision to return to Cleveland the next morning and, since then, has largely kept his distance from Wade.

Tomorrow, that changes. In what has to be the most anticipated exhibition game since Wednesday’s epic Spurs-Alba Berlin tilt, the Cavs will take on the Heat in Rio, where the two teams have been stationed for the past couple of days. Naturally, there are too many story lines to count, so use this handy guide to get familiar with them all.

On Wednesday afternoon, the ESPN.com reporter sent a shiver down every Cavs fan’s spine with this ominous observation:

Ran into Cavs as they were going sightseeing in Rio. Kyrie Irving is in a walking boot on his right foot.,

As it turns out, Irving is only dealing with a mild ankle sprain, caused by a collision with Anderson Varejao in practice. He’ll probably be held out of the game for precautionary reasons, giving us the Matthew Dellavedova versus Mario Chalmers matchup we’ve been dying to see. In the meantime, try to imagine the uncomfortable interaction that must have taken place between Windhorst and Irving on this sightseeing adventure. There is a 100 percent chance Windhorst tried to snap a stealth shot of the boot.

Per Windhorst, the first post-free agency meeting between LeBron and Bosh took place at Wade’s August wedding, and it was spectacularly awkward. Reportedly, LeBron had to play “a bit of a wallflower role,” because the event was basically a giant Heat party, and Bosh maintained that he was “now the enemy.” Furthermore, Bosh recently admitted to reporters that, “If guys aren’t in this locker room, I don’t have much time for them — if any,” so it’s mildly shocking that he talked to LeBron at all. They’ll probably engage in a quick postgame bro-hug, but it won’t be remotely genuine.

Like most of his teammates, Shabazz Napier has a complicated history with LeBron. However, Napier’s is only peripherally related to basketball. To recap: During the NCAA tournament, LeBron tweeted his affection for the UConn senior, whom he deemed the top point guard in the draft. In an apparent attempt to lure LeBron back to Miami, Pat Riley traded up to select Napier in June’s draft, to which LeBron tweeted his hearty approval. In turn, Napier followed LeBron, but then proceeded to unfollow him two weeks later, mere hours after LeBron’s letter was published on SI.com. While Napier claimed not to control his verified account, the damage was already done. At the very least, expect a Mo Williams-esque cold shoulder tomorrow.

On beach in rio #cavsrio

When Marion describes the Cavs’ mindset as “super chill mode,” he might actually be understating the level of chill at which his teammates are currently operating. I mean, Dion Waiters’s hat obviously speaks for itself, and this image is the photographic equivalent of the 100 emoji:

Meanwhile, Wade is taking a decidedly businesslike approach to the trip. “I won’t get to experience it [Rio] that much,” he told the AP. “It’s a work trip. I won’t be on the beach. I got a lot of beaches in Miami, and I don’t go to them much.” Never doubt Wade’s ability to formulate a passive-aggressive diss, on the spot. He has it down to a science, to the point where it’s impossible to respond without sounding desperate and/or insecure. (Here is photographic evidence of Wade being near the water in Rio, which is essentially the same thing as spending a day at the beach.)

Apparently the 3-goggles gesture means “Fuck you,” in Brazil, so the NBA has understandably issued a preemptive strike against the popular celebration, for tomorrow. This is a rather unfortunate development, as I would love to watch an entire crowd mistakenly assume that Mike Miller and Danny Granger were continually flipping them off. If Varejao were a legitimate 3-point shooter, I bet he’d throw up the goggles all the time.