Color Palettes and Cupcakes and So Much More! Let’s Talk LeBron Rumors 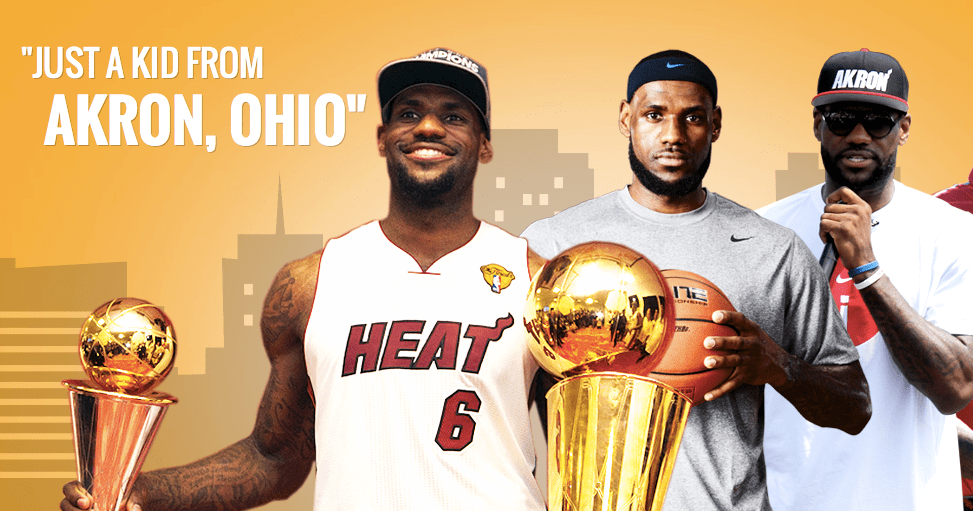 Like all great stories in America, this begins with a shirtless personal trainer.

Late last week, Cleveland’s own Joshua Teplitz began reporting that LeBron James had decided to sign with the Cavaliers, and that it was only a matter of time until an announcement would be made.

After Finals loss, LeBron texted former coach Dru Joyce II. The text read as follows, plain and simple: "I want to be back in Cleveland"

As I stated last night, LeBron is already a Cleveland Cavalier. Informed Heat of departure and informed Cavaliers of his intention to join.

While shirtless personal trainers generally aren’t the most reliable sources for NBA news, Teplitz was so steadfast and specific in his reasoning that I, like many Cavs fans, started to genuinely believe him. When LeBron himself tweeted about wanting to be in Cleveland on the Fourth of July, I figured a return to the Cavs was all but assured. And if that wasn’t enough, a local cupcake shop was backing up Teplitz’s story. 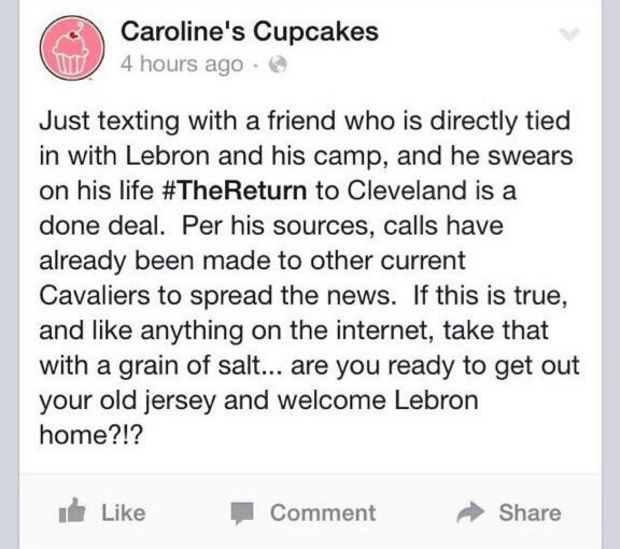 Because LeBron’s foundation has direct ties to the Northeast Ohio cupcake industry, this seemed legit.

So, too, did Chris Broussard’s Sunday-night Twitter spree about the Cavs being the front-runner to land LeBron. The stage was set for a dramatic week of anonymously sourced rumors and more cryptic messages from LeBron’s inner circle. Here are five of the highlights.

For the uninitiated, DJ Steph Floss is a Cleveland native and LeBron’s personal DJ. When he informed his followers that he was headed to Vegas this week, I decided to keep a close eye on his social media accounts in case LeBron slipped up and told him his free-agency plans after one too many bottles of Ciroc. While that didn’t quite happen, Steph Floss did send out an Instagram image from LeBron’s Nike banquet, and the color scheme looked suspiciously like that of the professional basketball team in Cleveland. 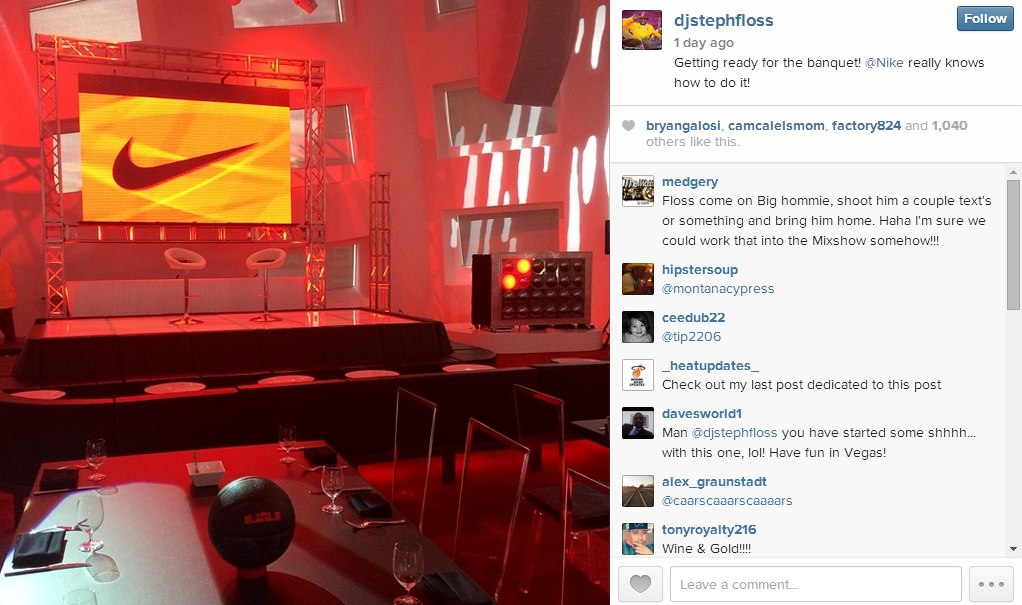 I called in to Steph Floss’s home radio station, Cleveland’s Z 107.9, to ask the evening host if she had received any inside information about LeBron, but she just chuckled and hung up on me. Read into that what you will.

Apparently, LeBron brought his entire high school basketball team with him to Vegas too. (Editor’s note: Note the comments here. The Internet is doing great this week.) 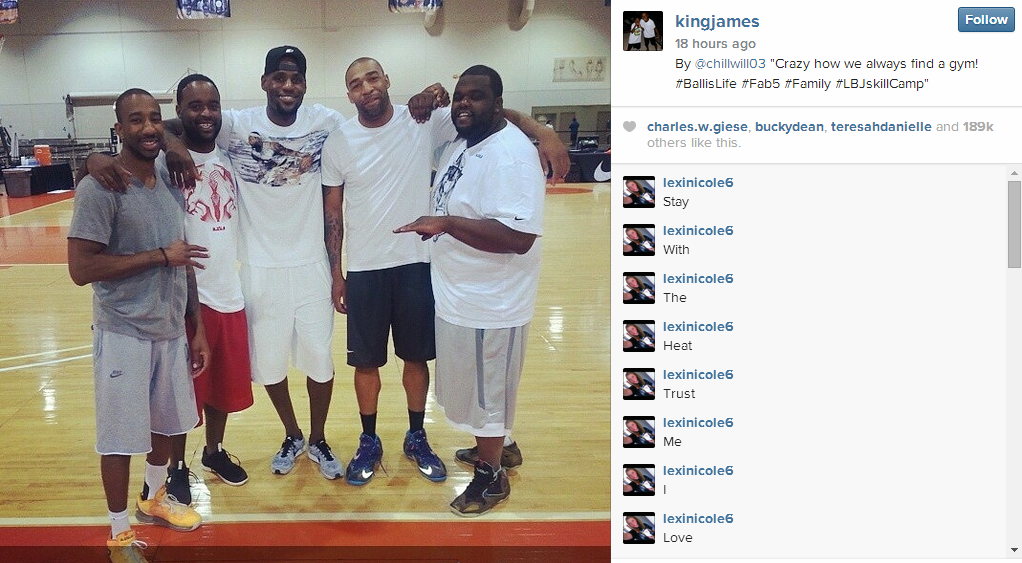 You have to assume that their main topic of conversation was LeBron’s impending decision, so I also scoured their Twitter accounts in search of clues. Romeo Travis, fourth from the left, was none too pleased with the attention.

Stop asking me if lebron coming home. I DONT KNOW!!!!!

However, Sian Cotton, fifth from the left, was enjoying the spotlight, as he spent much of the day retweeting messages from hopeful fans about LeBron rejoining the Cavs. Also worth noting is the fact that Cotton, who is something of a rapper, has a song entitled “Almost Home,” which, come on, has to be about LeBron.

There are a number of ways to interpret this, of course. Maybe LeBron just wanted his cars in Akron for the summer. Maybe he does this every summer, so it’s nothing unusual. Maybe he finally found a buyer for his mansion, which has been on the market since March, and needed to remove them from the property. But my favorite theory comes from Grantland’s Chris Ryan, who speculated yesterday that LeBron was preemptively preventing enraged Heat fans from smashing his vehicles with baseball bats after he announced his return to Cleveland. It makes perfect sense.

Despite almost every credible NBA writer claiming that LeBron has yet to make up his mind, Sheridan Hoops’s Chris Sheridan reported yesterday afternoon that LeBron has already told Pat Riley of his decision to sign with the Cavs.

When the collective Internet scoffed in response, Sheridan became defiant, arguing that a grainy picture of Vegas odds irrefutably legitimized his report.

I understand y'all want me to say something more, but I've said all I needed to say. This photo from Vegas. pic.twitter.com/O1a7JUaGSg

To his credit, Sheridan correctly predicted that LeBron would join the Heat in 2010, so we shouldn’t completely dismiss his report, which maintains that LeBronJames.com will deliver the news sometime before LeBron leaves for Sunday’s World Cup final. In fact, many folks, including Teplitz, have been saying that the announcement will come on LeBronJames.com, which led to the entire city of Cleveland feverishly refreshing the site last night. Per usual, the night ended in disappointment.

UPDATE: As some of you have pointed out in the comments, the understanding of the coding on LeBron’s site here could be off. Treat these rumors for what they are: irrefutable evidence of LeBron’s return. At the very least, it resulted in Chrissy Teigen tweeting at me. That might be even more of lifelong dream that LeBron returning to Cleveland.

Derek Jeter's Diary: The Haunches of a Champion