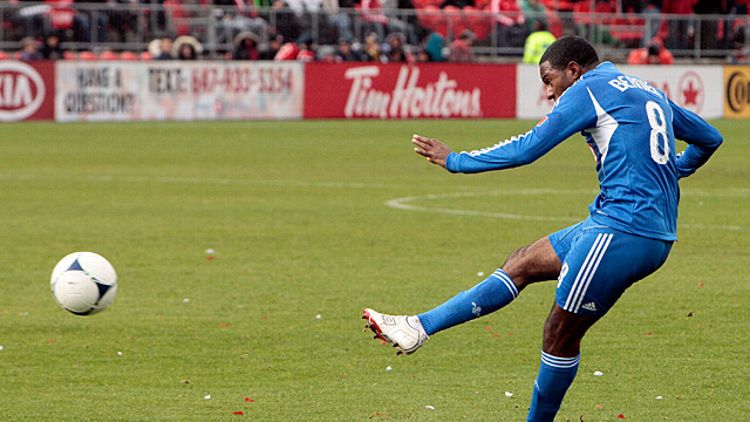 So here’s a typical extract from a conversation with Montreal Impact midfielder Patrice Bernier:

“He was a great footballer … a doctor … he smoked too! The way he played too, his penalty shots — he took two steps, always into the top shelf, the corner.”

We’re talking about one of my favorite soccer players — the late, great, larger than life Brazilian, Socrates. It’s not an enthusiasm I choose to share with everyone, because he’s emblematic of something that’s personal about my relationship to the game — watching the Brazil team that Socrates graced in the ’80s was the first time I trusted my own taste. But I get the sense Bernier gets it, as he has a demonstrable, encyclopedic fan’s enthusiasm for the game, so I start to tell him about the feeling of seeing that Brazil team as a kid.

Bernier is chuckling as I talk to him, and fills in my reaction for me: “You said, “OK! I like this!’ I grew up with the 1970s team — this all starts with my father, because Haitians are very Brazilian orientated … fanatics … and that started with Pele’s time, because he traveled a lot and came to Haiti. I saw tapes from that era. Jairzinho, I could tell you a whole story about him. I saw all the goals, all the games, and then ’82 and ’86, Brazil were probably better than the 1970 team but they never won — the best team that never won.”

It’s impossible to capture the dimensions of Bernier’s speaking style: part riffing; he will quote you, himself, or an imagined other constantly just to enliven a position he’s taking; there’s also the occasional hammered emphasis, which at the time can seem like a non sequitur, but turns out to be a kind of placeholder for a thought while he pursues another. Hearing him talk about his sport is like being shown items in a lovingly assembled Wunderkammer — the individual segues sometimes make sense only when you think of them as the story of Bernier’s emphatic enthusiasm for collecting soccer knowledge.

The Canadian international is in New York prior to the start of the MLS season — a season that will start with a surprise run of four wins for the Impact. Bernier will be the lynchpin of Montreal’s early-season form, sitting in front of the defense but also prompting much of the attacking movement, such as his instinctive assist for Marco di Vaio’s game-winner against New York. There’s even a little bit of Socrates’ swagger from the penalty spot (which I totally geek out on), as Bernier scores what turns out to be the game-winning penalty against Toronto.

Bernier was one of the first recruits to the Impact’s last year, though for obvious reasons he’s quick to remind me that this wasn’t “a typical expansion team, for the club, the owners, the people,” because the club already existed. Indeed, the signing of Bernier was a symbolic nod to the club’s roots, the player having left the Impact nine years earlier for a career in Europe. When he first returned, Montreal fans perhaps saw the symbolic value before the soccer one. As Christian Bourque, of the Ultras Montréal supporters group, says, “For old, old fans seeing our boy come home was also a way to build bridges between the old Impact and the new one. Some of us may have underestimated [that] his impact is actually on the pitch itself.”

As head coach Jesse Marsch tried to build a side overnight, there were other challenges, from the tactical to the mundane, as a newly assembled team, living out of suitcases in hotels, adjusted to a new life in Montreal that seemed to take a long while to settle.

“For me it was OK, because I was coming home, but for other players, even if you’re American, you maybe thought that Canada’s going to be the same, but it isn’t. I know how it is, playing abroad, when you come in if you’re not settled in a place that you consider your home, you’re always thinking, My wife, kids, where am I going to live? I think it plays on your mind.”

On the field, the Impact took time to take shape, initially starting out in a tentative 4-4-2, as Marsch and the players figured out the best use of personnel. The early season wasn’t helped by a series of “event” games as the team played games at the Olympic Stadium while they waited for the refurbishment of their home Saputo Stadium to be completed. “The first game at the Big O … BOOM … 59,000 people. The Galaxy comes to town, David Beckham comes into town … 62,000, we’re playing on turf, we’re playing in a stadium that we know is not really home. Then we arrived in Saputo Stadium with 20,000. First of all: grass! We played Seattle, and I think we win 4-1; we play Houston — 4-2. And suddenly, ‘Ah! We can score goals.’ And not just one or two — we’re creating attacks, generating 10 chances a game. I think the liberation at that point, offensively, happened.”

The team had been evolving tactically in the lead-up to the Saputo reopening. “Towards 12, 13 games we shifted towards something like a 4-2-3-1 and it was really two defensive midfielders, one no. 10, and two offensive wingers/midfielders. It allowed me to express myself a lot more — not being too defensive, and going forward also.”

As summer kicked in, the Impact were truly coming together, with Bernier’s prompting from the base of midfield a crucial component. “That’s where we started building something. That was the foundation: ‘OK, 4-2-3-1.’ It was finding the right people that fit: we had Andrew (Wenger), until Marco (di Vaio) started, we had Bernardo Corradi at that time, and then slowly Marco came in. Slowly everybody found the position that was more successful for them into the system. And then that’s why, in July and August, we did better.”

The side’s identity and best formation became so apparent that even the arrival of the high-profile Serie A players Alessandro Nesta and Marco Di Vaio didn’t prompt a drastic reshuffle of the system, as the Impact pushed hard in late season. Meanwhile fellow Canadians the Vancouver Whitecaps would almost derail their season trying to fold their own designated player purchases into the team, at around the same time the Impact were getting hot.

Already in 2013 the Impact have matched that 2012 road record in their first two games — and done it in consecutive weeks, in two of the most difficult stadiums to visit in Major League Soccer (Seattle, then Portland). After four games they have the league’s last 100 percent record, all with a new coach. After what, by consensus, had been a decent first season, Marsch was gone, replaced by the Swiss coach Marco Schällibaum. Bernier plays down the upheaval.”

“You’re hoping for the playoffs, the mark of success. We established our brand and we finished very strong, and we told people, ‘This is Montreal. They’re competitive, they’re a decent team, and when they’re at their best, you better watch out.’ So everybody was looking and wondering what 2013 was going to look like. Are we going to learn from what we lacked on set pieces? The way we played in away games? So you start projecting into 2013 and then Jesse parts ways with the club. We go into Italy (on preseason tour) and there’s a bit of confusion at that time, because we had no coach and you never know if personnel change is going to be drastic or not. Fortunately for the team, we lost some members but we didn’t lose the 22 players who came back, and most of them played significant minutes. We’re not building from scratch, which is what people think when they see a new coach — the foundation is still there.”

What’s changed under the new regime?

“I think at the end of the [last] season, teams found out what our strengths were and how to play against that, and we never really found a Plan B. Teams were sitting back and we weren’t able to have another route to score. I think that’s what the coach is working on. A team that still plays in the same way, but split it up so it’s less predictable. That’s how it is in this league. Some teams are very tough to beat defensively, or they’re very physical. And we’re not a big team, we’re more of a possession team, so we have to find another way to compete with these teams.”

I note that when Bernier speaks about tactics he seems to have more of a meta-perspective than the average soccer player, something he alludes to when talking about the difficulty facing a coach. “It’s not that easy working with egos, working with salary cap, pulling that together so everybody’s happy — 28, 29, 30 players. I respect the coaching profession, because when you’re a soccer player you’re in your own bubble — you concentrate on yourself.”

Does he want to coach? “I know I want to be in football, but you look at sporting directors, coaches … where are you going to have the most influence? Do I want to be a coach that comes in and says, ‘I’m going to have a blend of football that MLS has never seen?’ And hope that I have three years, four years to prove it? I’d like to maybe be with academy kids and learn my trade. I wouldn’t want to jump in.”

He seems to be weighing the options as we speak. Bringing the conversation back to where we started, I mention Socrates again, and his wide range of interests beyond the game — from democracy advocacy to medicine. Bernier has a curious mind, and repeatedly mentions the importance of family life. He also speaks of how hard it is, within the rhythms of playing soccer, in such a huge country, to get some distance and perspective beyond the bubble of the game. I wonder if he truly has the monomania for coaching. But there’s no doubting his love for the game, and I only have to mention another Brazilian great, Falcao, to send him along another path of happy free-associating:

“Awwww … that team … Zico, Falcao. Junior playing … I think he was right back, coming up. But the appeal for Brazil for me is more aesthetic. Argentina now, it’s aesthetic, but they’re closer to European; more efficient.”

There’s the briefest of pauses as Bernier returns from his reverie, then, “I’m not just fixated on my own era, I grew up knowing the decades, and who were the best players from the ’60s, ’70s, and ’80s. I love it, but it’s obsessive. I try to read everything in terms of tactics, too. Have I read Inverting the Pyramid (Jonathan Wilson’s masterful history of tactics)? No, but it’s on my Amazon list — I don’t know if I want to dive in now, or when I stop playing to really just … dissect! Because I know I can really go overboard and I dissect too much. I have to realize that I learn a lot, but I have to stop analyzing and enjoy a little bit too.”

Jarvis Jones and the Latest Case of the NFL Draft's Tape-vs.-Workout Debate