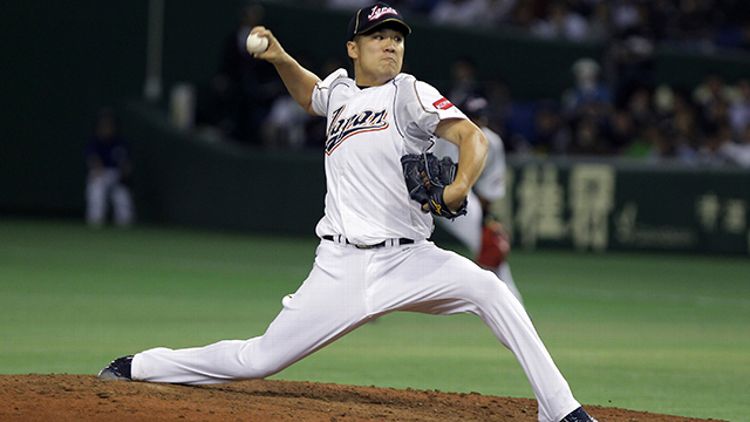 As major league teams rush to re-sign star players before they can hit the open market, the supply of quality free agents continues to dwindle. The biggest pitching names that immediately come to mind in the coming free-agent crop are Matt Garza, Ervin Santana, and Hiroki Kuroda — all quality options, but all of them also on the wrong side of 30 this winter and thus unlikely to command huge contracts. The pitcher most likely to fetch a major long-term deal is much younger than that, a right-hander with a mid-90s fastball and two killer secondary pitches, someone putting up gigantic numbers this year who could swing the 2014 pennant race, and the next several after that. There’s a good chance you’ve never even heard of him.

Masahiro Tanaka is just 24 years old, but already in his seventh season playing in a major professional league. Following in the footsteps of Daisuke Matsuzaka and Yu Darvish, Tanaka is expected to come up for bidding this winter, earn a ton of money, then play for an MLB team next season. For a country that appears on its way to producing more quality pitchers than ever before, Tanaka is likely to be the next major target.

The Tohoku Rakuten Golden Eagles of the Japanese Pacific League haven’t officially made Tanaka available yet, but major league teams are already salivating over a pitcher they see as a no. 2 starter once he crosses the pond. The stats are … ridiculous, really. In 21 starts this year, Tanaka has gone 18-0 with a 1.15 ERA. This isn’t anything new. In 2011, Tanaka went 19-5 with a 1.27 ERA, winning the Sawamura Award — which predates the Cy Young. In 2012, he went 10-4 with a 1.87 ERA. Drilling deeper reveals more eye-popping stats. Tanaka struck out 138 batters this season against just 23 walks (a 6-to-1 strikeout-to-walk rate), ceding just five homers in 165 innings pitched. That’s actually his worst result of the past three seasons: Tanaka whiffed 169 batters and walked just 19 in 2012 (just less than nine strikeouts for every one walk) with just four homers allowed in 173 innings, and fanned 241 while walking just 27 in 2011 (another near-9-to-1 rate), with eight home runs given up in 226⅓ innings. For perspective, only three qualified big league starting pitchers have ever posted strikeout-to-walk rates of 9-to-1 or better: Curt Schilling in 2002, Cliff Lee in 2010, and Bret Saberhagen in 1994.

Even those numbers don’t fully tell the story. Nippon Professional Baseball does have its share of stars. But the least-skilled and least-polished players in Japan are far worse than the bottom of the barrel in the majors. They’re often 19-year-old kids, young enough to be better suited for rookie ball, only not even necessarily among the elite players at that level if they were hypothetically dropped onto low-minors rosters in the U.S. In his seminal book Pitching in a Pinch, the great Christy Mathewson noted that he could relax every three innings, since the bottom of most batting orders in early–20th century baseball was no match for his wipeout stuff. That’s how pitchers with questionable stuff like Tsuyoshi Wada can post a 1.51 ERA with great peripherals in Japan, then come to the States and fail to make it out of Triple-A. Tanaka faces a similar situation in Japan, with weak competition allowing him to conserve energy, go deep in just about every start, and also put up big numbers.

This is the challenge scouts face in covering players from any country that’s not the U.S. In Cuba and Korea, Taiwan and Japan, analyzing a pitcher’s stuff, repertoire, and body type becomes far more important than sweating the results. The good news is that Tanaka grades just as highly using those standards. He’s big and sturdy at 6-foot-2, 205 pounds, with no history of significant injuries. His arsenal of pitches goes six deep, and he mixes those pitches aggressively. According to Michael Westbay, administrator of ScoutDragon, an analytics site covering Asian baseball for MLB teams, Tanaka has thrown his four-seam fastball 38 percent of the time since the start of the 2009 season. The velocity on that pitch can vary greatly, from the high-80s (when those weak hitters come up) to mid-90s; radar guns clocked it at a career-high 97 mph in his most recent start on Friday, a game in which Tanaka fired seven scoreless innings, struck out eight, walked just one, and reached that 97 mph mark on his 108th pitch of the game. He has thrown his slider 29 percent of the time and his splitter 15 percent of the time over the past five seasons. Both those pitches are considered better than average.

But as Baseball America’s Ben Badler wrote in his summary of Tanaka’s most recent start, the righty’s splitter grades out as a potential 70 on the 20-80 scouting scale. “Tanaka has arguably the best splitter in the world,” Badler wrote. It’s partly because not many major leaguers throw one, but also because it’s a devastating pitch that leaves hitters with little option but to keep the bat on their shoulder and hope that it dives below the strike zone for a ball, rather than the belt-to-knees break it often gets.

Check out these highlights, which show off Tanaka’s entire array of pitches (including a two-seam fastball that acts like a shuuto, plus the occasional get-me-over curve and changeup), but really showcase his splitter around the 20-second mark.

“You look at some of the pitchers who’ve come over and had success in recent years,” said Patrick Newman, who runs the site NPBTracker.com, which tracks news from the Japanese leagues. “Tanaka is not quite as good as Darvish. But he’s got better stuff than [Hisashi] Iwakuma and a harder fastball than Kuroda, with a similar splitter and slider. Except he’s younger than those guys. So you can ease him in, let him learn the ropes for the first year or two, and there’s a chance that his peak could actually be a little higher. A no. 2 starter seems like a generic classification; he could be an ace on a bad team or a no. 2 on a team with a really good ace. I wouldn’t put him up there with [Justin] Verlander or Felix [Hernandez], but he has a chance to be very good.”

Tanaka will have some issues to work out in the big leagues, assuming Rakuten posts him as expected. He drops down at times at the back of his delivery when muscling up on his fastball, which can make the pitch go pretty straight; you can get away with that against less powerful competition in Japan, but a Paul Goldschmidt or Miguel Cabrera can send a pitch like that into orbit, even if it’s 95 or 96 mph. It’s also perhaps a bit troubling to see Tanaka’s strikeout rate fall off over the past couple years, from 9.6 per nine innings in 2011 to 7.5 per nine frames this year.

Even those potential weaknesses don’t project as major issues, says Badler. Scouts believe Tanaka will miss bats against both lefties and righties with his slider, and especially with his devastating splitter. As for that drop in strikeout rate, Tanaka has thrown far fewer four-seam fastballs than he did four years ago, and throwing a lot more two-seamers/shuutos (and a few more splits). That way he’s still generating outs, but doing so by inducing weak contact more often than before, while punching out fewer batters than before. Tanaka will be eight years younger on Opening Day 2014 than Kuroda was when he broke in five years ago. But that’s still a worthwhile comp.

“You look at what Kuroda did in Japan; his strikeout rate wasn’t anything special there either,” Badler said. “Pitchers have extra pressure to go deep into games since most teams don’t have much in the way of bullpens, so a lot of pitchers will go for those big outs. But then Kuroda gets to the majors, and he’s so effective with that fastball-splitter combo. I think that’s what you’re going to see from Tanaka too.”

The question then is how much Tanaka might go for, and which team will reel him in. Newman sees Tanaka as a better bet for long-term major league success than Hyun-Jin Ryu. Considering that the Dodgers paid nearly $62 million combined between the required posting fee and Ryu’s six-year contract, and that Ryu posted a 3.08 ERA and 3.29 FIP in his first 25 major league starts, we could be talking about a lot of bread. Not even Tanaka’s biggest fans think he’s quite as good as Darvish, who might have a pretty decent case for AL Cy Young this year if not for his DL stint. The Rangers ace ended up costing Texas more than $110 million between his posting fee and his own six-year deal. So one could make a case for Tanaka’s price tag landing somewhere between those two.

But in the two years between Darvish’s deal and the one Tanaka will likely sign, the game has changed a lot. MLB signed a new national TV deal that starts next year and doubles every team’s annual take. Big-market teams like the Dodgers and Angels have signed multi-billion local TV deals, and even a few small- to mid-market clubs have inked new, much richer media contracts than they had before.

The teams that figure to bid most aggressively on Tanaka offer a combination of franchise wealth and a full-time scout stationed in Japan or elsewhere in the Pacific Rim (something roughly half the league’s teams don’t have, which is making them miss out on opportunities, particularly on less-heralded players like Iwakuma who’ve gone on to make a splash in the majors). The Yankees have been watching Tanaka closely. The Dodgers and Red Sox could get involved in the bidding. The Rangers are rumored to have a scout more or less stalking Tanaka through each of his starts.

Pit a few teams with those resources against each other in a bidding war, in a free-agent market where the pitcher coming off the best season will be the guy about to turn 39, with pitching-needy clubs like the Yankees leading the way and the most recent big-ticket Japanese free agent setting the league on fire, and Tanaka’s price tag could skyrocket. As would the expectations placed on him to be Japan’s next big thing.

About Last Night: Fear the Cubs