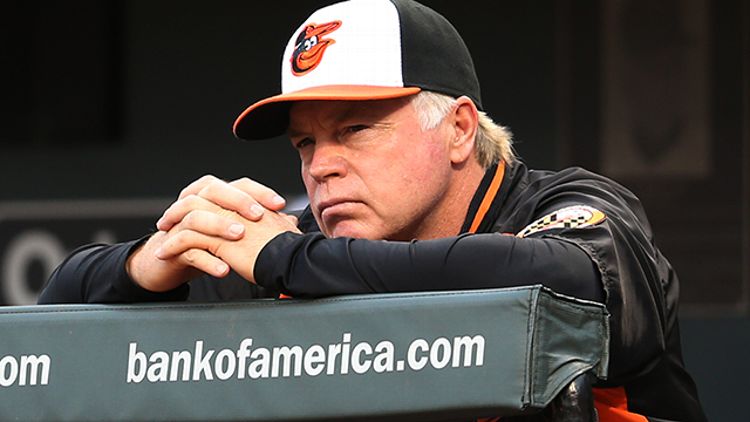 No point in baseball’s schedule underscores its unfairness more starkly than September. No team is getting screwed worse than the Baltimore Orioles as a result.

Over the final 34 days of the regular season, the O’s will receive just one day off. That’s a calendar quirk that will severely test even an expanded roster. The unbalanced schedule poses a much bigger, and more unfair, problem. With Baltimore playing 76 games against AL East opponents every year, September was bound to include many matchups against some of the best and richest teams in baseball. Turns out the Orioles play 20 games in the final 21 days of the season, all of them against the beasts of the East. Compare that walk over hot coals with the cupcake schedules awaiting playoff hopefuls in other divisions like the Indians and A’s and you have an imbalance that figures to snuff out what remains of Baltimore’s playoff chances.

Create a balanced schedule for all teams

At first glance, this would seem to be easiest the solution. Using the Orioles as an example, if they got to play the Astros as many times as Oakland does, and the A’s had to square off against the Red Sox as often as Baltimore does, that would seem to address much of the problem.

Now come the unintended consequences. First, you’d have to figure out exactly how many games each team should play against the others. The optimal number might be 10, since playing nine games would set up a situation where one of the two teams facing each other would get an extra series at home, assuming you split the matchups into three-gamers (to get to nine and keep it even close to even home-and-road-wise, you’re looking at a one-game series somewhere along the way, which doesn’t work logistically). Ten games against each of your 14 league-mates gives you 140 games. To keep the tradition of the 162-game schedule alive, teams would then play 22 interleague games each. That’s not bad at all, actually — the O’s play 21 interleague games this season under the current setup.

Of course the very existence of interleague play invites potentially unfair schedules, since different AL clubs will face different NL clubs, and vice versa. Sticking with the Orioles, they actually caught a little bit of a break this year if we’re just talking about straight win-loss records, since four of the six teams they play this year — the Giants, Rockies, and Padres — absolutely stink, while the Diamondbacks and Nationals have scuffled just a tick above .500. An AL team facing NL Central opponents this year (plus a tougher “natural” rival than the Orioles get in the Nats) would have a tougher time, given the success of the Cardinals, Pirates, and Reds this year. (We’ll get to issues beyond records this year shortly.)

A big sticking point, though, would be the erosion of rivalries. You might be sick of watching the Yankees play the Red Sox seemingly every other weekend. But the Yankees and Red Sox aren’t given the boosts in attendance and TV ratings derived from matchups. That goes double for the national TV networks, where a Rays-Indians game might sound intriguing for baseball junkies, but nowhere near as enticing to the masses (or as profitable to ESPN and Fox) as a Yankees–Red Sox would be. Even leaving money out of it, there are plenty of fans that wouldn’t find it as appealing to have rivalries that date back a century suddenly weigh no more heavily on a season’s results than games against a team that plays 3,000 miles away.

Which brings up another major problem with balancing the schedules: travel. Imagine you’re a team like the Mariners (or another coastal AL West club), already more geographically isolated from the rest of the league than anyone else. Now you’ve got to take as many cross-country flights to Tampa as often as you do short hops to Oakland? Unless baseball is willing to start the season earlier or end it later, thus adding more days off to the calendar, it’s likely to lead to a lot more tired baseball. You could also cut the schedule, say, back to the pre-1962 level of 154 games to create more days off, but the chances of owners agreeing to fewer games and thus less revenue are slim to none.

We’ve discussed the pluses and minuses of a balanced schedule. Pick whichever one you prefer … but group teams together by financial clout, so that you don’t have, say, the Padres chasing a Dodgers team that runs a payroll four times higher than theirs.

For instance, if you want to stick to the same six divisions of five teams, you’d end with something like Yankees, Dodgers, Red Sox, Cubs, and Phillies. Maybe the Angels’ coming TV bonanza vaults them past the Phillies, or you go by expected future revenue and figure the Mets will eventually take advantage of playing in the biggest market in the country. Whatever the exact divisional breakdown, matching up five of those wealthy teams, and then on down to a division that has the Rays, Royals, Pirates, Marlins, and A’s, makes a lot of sense by the standards of financial fair play — especially if you can work out the travel issues by either shortening the season or rooting for global warming/random chance to make Opening Day in March and a November World Series more climactically palatable.

Even if you have balanced schedules, it’s still not all that fair to have the Orioles, Jays, and Rays try to topple the much richer Yankees and Red Sox, or the Padres and Rockies going after the Dodgers, if they want to win their divisions. Yes, having two wild cards per league does offer other avenues into the postseason. But Major League Baseball has created the one-game playoff format supposedly to make winning your division mean something. In the case of a team like San Diego, what it means is you overcame spectacularly long odds, given your massive financial disadvantage.

This might be the fairest of all setups. But it could also create the most problems were it implemented in real life. You’d still have to worry about stripping away existing rivalries and travel concerns. But if you simply combined 15 teams into one big standings table for each league, you might also make the pennant races less compelling. Like in the English Premier League, you’d have teams with little incentive to keep fighting down the stretch, knowing the best they can do is seventh or eighth place. (One might counterargue that the White Sox, Brewers, Astros, Marlins, and multiple other teams have had little to play for since June in the current setup, of course.)

This isn’t necessarily directly related to the fairness issue. But the current setup of 15 teams per league does force daily interleague play, which brings those fairness issues back up (and though perhaps this is just a matter of personal taste, I don’t find Twins-Rockies matchups all that compelling or aesthetically pleasing). If the league were to expand by two teams, you could have eight balanced divisions of four teams each. Group them by revenue. Then have each team play 11 games against each of the other 15 teams in the league, for a 165-game schedule with no interleague play.

This, too, could be an issue of course, if owners feel that potential expansion fees wouldn’t be enough to override diluting their share of national TV money and other revenue sources, since new teams in smaller markets would likely have to feed at the revenue-sharing teats of the Yankees and Dodgers. There’s also the matter of finding two new viable markets for teams. If we’re going strictly by fairness, we’d probably be best off adding two more teams to the New York–New Jersey–Connecticut tri-state area (one team in Brooklyn, another in North Jersey?). Of course that would create an over-my-dead-body situation from the Yankees’ and Mets’ (and maybe Phillies’) screaming-mad owners. If that (or maybe a third team in the Greater L.A. area) wouldn’t work, we’d be back to the usual suspects for theoretical teams, Portland, Charlotte, San Antonio, Vegas, and hey, let’s throw Montreal in there, too.

Of course a supporter of expansion would note that attendance accounts for a far lower percentage of a team’s revenue stream now, that teams could do well with well-constructed local media deals, and that indoctrinated new fan bases in new cities would help grow the game, which can’t possibly be a bad thing.

There are other issues worth debating down the road, if the league truly cares about fairness and consistency. For one thing, the league should probably decide on the designated hitter by either making it a league-wide practice or by abolishing it altogether; I vote for league-wide, since pitchers hitting .095 and constant bunting is only exciting if you’re a masochist.

But working on ways to curb the disadvantages of the game’s revenue gap would seem a worthwhile goal to have. Even granting that smart management can and does overcome revenue differences; even acknowledging that too much uniformity is a bad thing and that part of what makes baseball great are its many quirks and regional differences; even knowing that ratings are higher and revenue opportunities greater when the Yankees play in the World Series than when the Astros do; even making the romantic argument that it tastes sweeter when you win after two decades in the wilderness, the way the Buccos are doing now … we can always improve.

Assuming a new commissioner does indeed take over for Bud Selig before the sun explodes, let’s hope he has enough cat-herding ability to convince 30 owners to work together on this. We won’t have to watch races get decided by factors other than strong play, and the game will be much better for it.