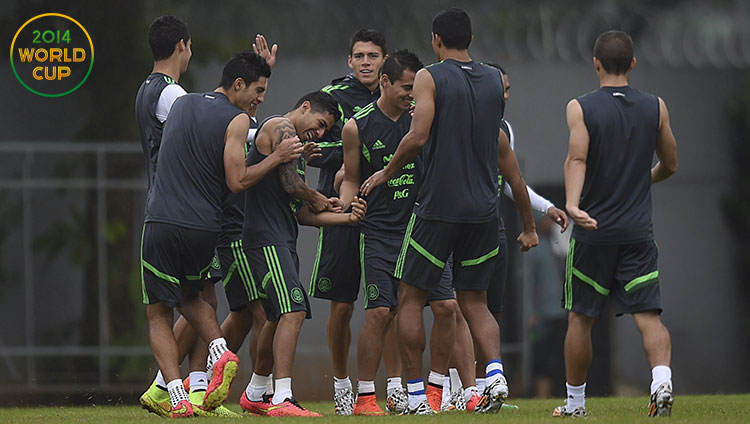 There’s nothing quite like a raft of World Cup previews to remind you that, for all the instantaneous Twitter physics of our brave new world, and for all that there are fetishists for every soccer league on the planet — those who watch so you don’t have to — there’s still a discernible lag when it comes to assessing international teams that aren’t in the top five in the world.

In Mexico’s case, regular USA soccer fans might be on intimate terms with perennial “dos a cero” scorelines, El Tri’s coaching carousel, or even last week’s fantastic press conference from Miguel Herrera (more of which in a minute). But most casual fans from around the globe sit down on the day of the team’s first game, scratch their heads strategically, remember the 2012 Olympic champion Mexico team, and assume that they’re about to watch a young, talented side in ascendance.

The irony is that, despite the ongoing mess of 2013, the residue of which is still sticking to the Mexican team’s cleats, that’s sort of true. Not for this World Cup necessarily, but in the sense of a more general upward (though turbulent) trajectory.

The Mexican Federation’s decade-plus investment in youth, its jump start on dominating the finding and securing of eligible talent across North America (which belatedly stirred U.S. Soccer into action), and of course that Olympic win, do suggest that the potential is there, despite the spinning seat in the dugout.

If you zoom in a little, the picture looks less rosy. Forty-seven players played for Mexico under four coaches (four in six weeks at one point) in their stuttering qualification campaign and … actually let’s pause a moment.

This post is going up just before Mexico play Cameroon. So this is possibly the last chance we’ll have to remember and appreciate that time Graham Zusi scored his first headed goal for the USMNT, knocking Panama out of the World Cup and doing for Mexico what they were failing to do for themselves: qualify them for Brazil. This little footnote is sure to be swept into the dustbin of history by actual World Cup events.

OK, we’re back. So let’s assume you know that Mexico had a dire qualifying campaign punctuated by an underwhelming Gold Cup performance, managerial upheaval, and suffered a near fatal dent to their presumptive advantage at Azteca Stadium. Yet Mexico got to Brazil. What are they going to do there?

If you saw last week’s warm-up games against Bosnia-Herzegovina and Portugal, you might be inclined to answer, “Not much.”

Mexico looked poor. Over two games the only remarkable spark came from Miguel Herrera’s nonstop monologue about Bosnia-Herzegovina in the pregame press conference for the Portugal game. After an entertainingly breathless rant, Herrera, who was angered by the Bosnia-Herzegovina manager changing his lineup after he had submitted his team sheet, was asked repeatedly about his team for Portugal (he usually announces his lineup early). Repeatedly, he deflected the question before suggesting that, “If you want to know the lineup, ask the coach from Bosnia.”

Then he named the team and left the stage. He may or may not have dropped the mic as he did so.

Portugal duly beat Mexico, 1-0, just as Bosnia-Herzegovina had done. Mexico, other than a physical if not stylish rally in the second half, looked ordinary. Herrera continues to do his best to distract, to cajole, to change the narrative around his brittle team, but they need someone to spark things on the field and finally turn the page on a dismal post-Olympic era.

Who will that be? Well, Mexico would love Oribe Peralta to rediscover the goal form he found in London. Alongside him, in the strike force, there are some interesting questions. After his season at Villareal (11 goals and eight assists), it might seem perverse to be talking about Giovani Dos Santos as a doubt, but Herrera’s 5-3-2 system has tended to involve flooding forward when an attack is under way, with potentially little use for the type of classic playmaking Dos Santos offers.

Yet realpolitik and the ongoing struggles of Javier Hernandez mean that Dos Santos is back in the heart of Mexican plans. Chicharito is likely to start on the bench against Cameroon, in an extension of an angst-filled, peripheral year at Manchester United.

At the back, Guillermo Ochoa looks to have gotten a firm hold of the goalkeeper slot over the past month, despite the claims of José de Jesus Corona. In midfield, the poor club form of Carlos Peña has seen him lose out to Andrés Guardado, while Héctor Herrera will play in the other attacking midfield position.

But perhaps the most intriguing sight is on the flanks, where Mexico’s wide men, Paul Aguilar and Miguel Layún, can look very dangerous in attack. At times, given their occasional instinct to get forward at the same time, they can be utterly irrelevant in defense. Layún, in particular, could have either a breakout World Cup as an attacking weapon, or typify Mexican defensive frailties. He’ll be used to the pressure though. This is a man who defied the hashtag #TodoEsCulpaDeLayun (“Everything Is Layún’s Fault”) at Club America to get to his first World Cup.

Mexico have been handed a favorable draw, with every chance of advancing. But the fact remains that, for all Miguel Herrera’s theatrical sleight of hand and distracting press conferences, this team arrives at the World Cup a step away from breaking point. For any other side, the team bus breaking down on their first day of training in Brazil, necessitating a fleet of taxis, might be seen as a misfortune. For Mexico right now, it’s a metaphor.

The Story of Melo to Miami