The Story of Melo to Miami 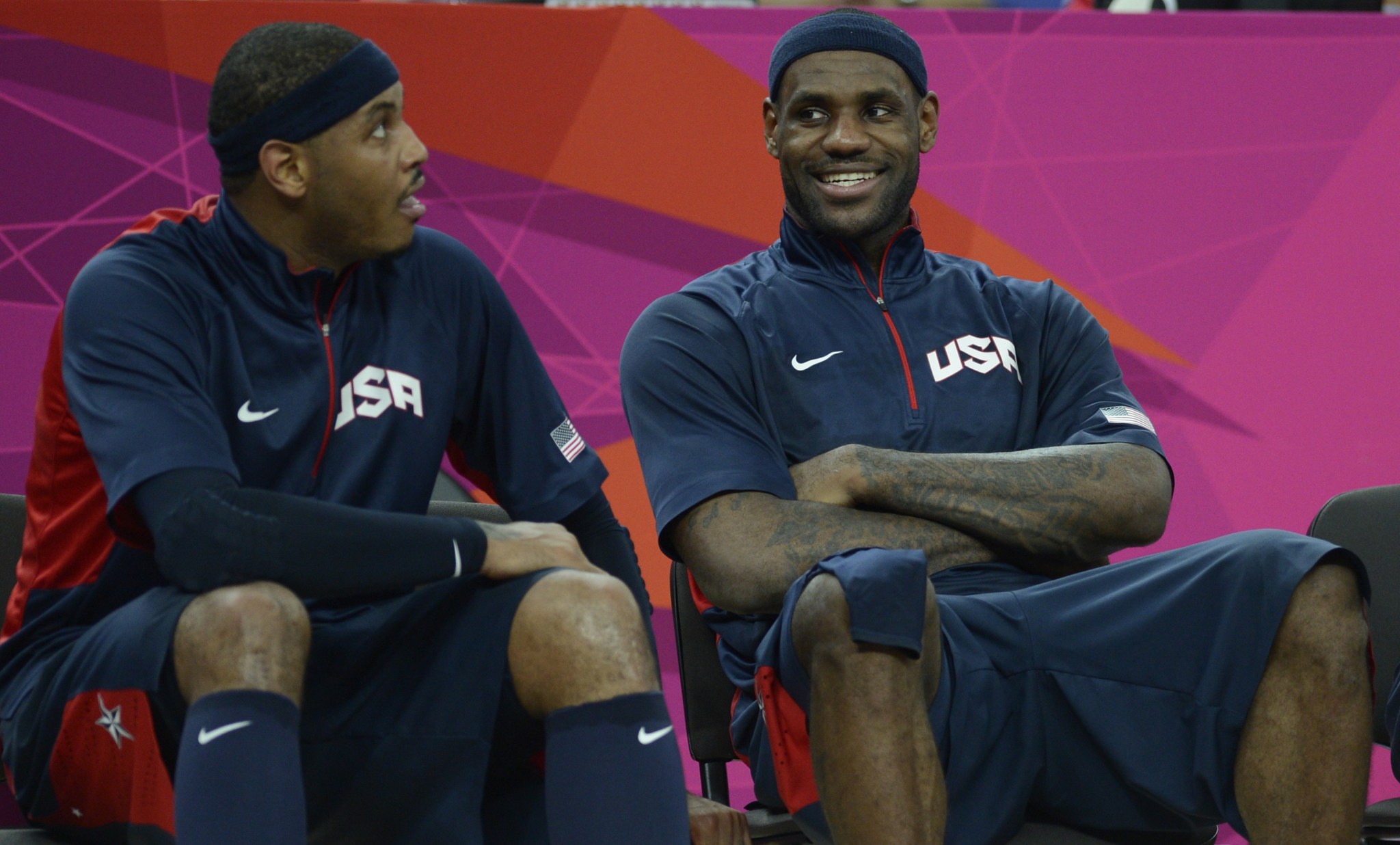 Sometime in the last 24 hours, you may have heard that the Miami Heat are planning on making a run at Carmelo Anthony this summer. We’ve heard murmurs of this for months now. Miami’s always been a fun hypothetical to throw out for Carmelo. But yesterday’s report from Brian Windhorst and Marc Stein took things to a whole other level. It’s real now. Or at least it’s a lot less ridiculous than it was. Sources out of Miami say that LeBron, Wade, and Bosh are all considering opting out of their contracts this summer, taking less money, and recruiting Melo to join them on South Beach.

Will any of this actually happen? Who knows! But we’re discussing it anyway, because it’s way too much fun to just dismiss. So here’s how this story played out as I tried to process it last night.

It makes a lot of sense for Carmelo. That’s no. 1. It’s easy to say when we’re not the ones leaving tens of millions of dollars on the table, sure. But remember how miserable he looked in New York last year?

That’s a man who knows money isn’t everything.

Carmelo is a great player, and he’s been called overrated for so long that now he’s probably one of the most underrated players of this generation. Can he carry a team by himself? No. Can he go toe-to-toe with LeBron and Durant? No. But if you put him next to LeBron and simplify his job, things could get diabolical. Think back to the Olympics, when Team USA went small and pushed Carmelo to the 4. All he had to do was score, and all he did was dominate.

That’s why Miami makes sense for Carmelo. It’s not a guarantee that he’d get to reprise his Team USA role with the Heat, or that any of this would go that smoothly, but the dream is worth chasing. You couldn’t even call him selfish. Leaving for Miami and taking less money would tell the whole world that all he wants to do is win.

Everywhere else he could go — Chicago, the Lakers, the Rockets, maybe Dallas — would come with all the same pressure he had in New York. But Miami would give him a chance to come in and be a crucial piece of a title team, without having to carry the offense. It could rejuvenate his career and, just as important, it might actually make basketball fun for Carmelo for the first time since the Beijing Olympics.

This makes even more sense for LeBron, Wade, and Bosh. They’ve already made most of their max deals at this point, so taking a pay cut for the next few years and extending their title window becomes a lot more attractive. Again, this is easier to say as the guy who’s not giving up tens of millions of dollars, but it’s not like they’ll be signing for the minimum all of a sudden. This can work, and as Amin Elhassan points out at ESPN Insider, there are a few different ways to make reduced salaries fit under the cap.

Couple that with endorsements that’ll help cover the salary sacrifices, the chance at more winning, and the legacy of four superstars changing the NBA landscape all by themselves, and you can see why the Big Three might want to do this. Adding a superstar like Carmelo would be complicated as hell on the court, but it’s also the one way the Heat could double down on the past four years and try to take this to an even crazier level.

The most amazing detail from the Stein and Windhorst story:

…while James was leading the Heat to a victory over the Indiana Pacers in the Eastern Conference finals, sources say the 29-year-old was finalizing what is believed to be the biggest equity cash payout for a professional athlete in history as part of Apple’s recent $3 billion purchase of Beats Electronics. Sources briefed on the situation say James realized a profit of more than $30 million in cash and stock in the Beats sale after he had struck a deal to get a small stake in the company at its inception in 2008 in exchange for promoting its high-end headphones.

Regardless of what happens with Carmelo, I’m really glad we found out about LeBron’s secret jackpot with Beats by Dre.

It’s the best celebrity equity power play since 50 Cent turned Formula 50 into hundreds of millions of dollars, and it also means that if Carmelo joins the Heat, I’ll probably write several versions of a “Did Dr. Dre ruin the NBA?” #hotsportstakes next year. (That doctor just put this league on life support. Straight outta Compton? Well, now we’re headed straight to hell.)

Imagine Phil Jackson, if this fantasy ever becomes reality. He just took over in New York, and his first two months could see him lose Steve Kerr, hire Derek Fisher, and lose Carmelo, virtually guaranteeing at least two years of misery in New York, while Pat Riley guarantees two or three more years of contending in Miami.

When you think about Phil Jackson, Pat Riley’s one of the only people alive who can actually compare résumés without getting laughed out of the room. Even after Phil’s five titles with the Lakers, Riley’s probably still more beloved among those fans. He’s also been wildly successful as an executive in Miami, and for all of Phil’s Zen wisdom, Pat Riley’s Machiavellian moves have proven just as successful over the years. Remember when he stole Lamar Odom from the Clippers, then used Odom to steal Shaq from the Lakers and go off to win a title?

Pat Riley might be the closest thing we have to Tywin Lannister in real life. The scheming just never stops. The Phil-Pat arms race was looking pretty one-sided when the Bulls were torturing the Knicks in the mid-’90s, but in the past three years, it’s starting to get a lot closer.

The Pat-Phil Cold War is getting good, but the open animosity between the Knicks and Heat has been great forever. 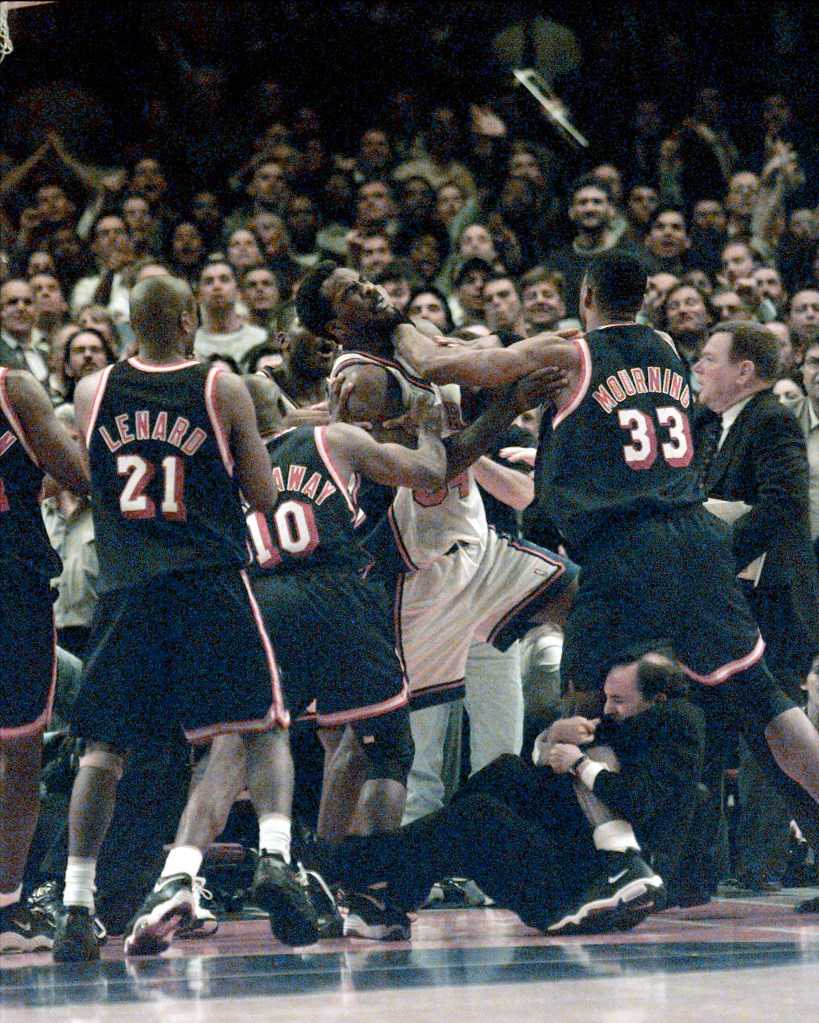 If Carmelo leaves and it actually turns into a title for Miami, Knicks fans will curse Pat Riley’s existence until the end of time.

Right this second, somewhere in an impossibly luxurious, impeccably decorated New York City apartment, Amar’e Stoudemire stares at a frayed copy of the New York Post. And he gently weeps. 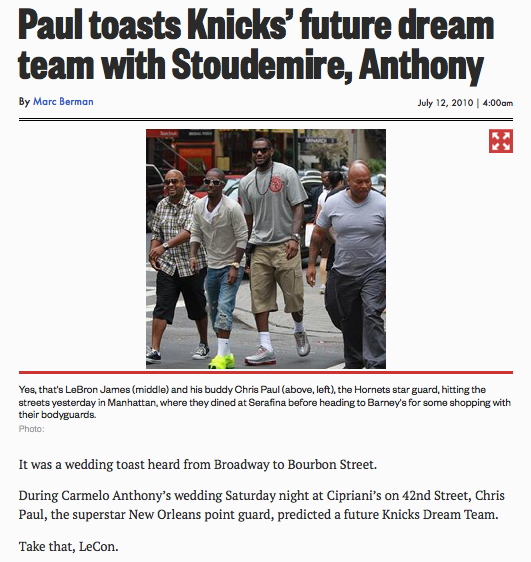 If the Heat sign Melo, they have to bring back Mario this summer. It doesn’t matter what happens the rest of the Finals. Nobody’s a real member of the Heat until they’re giving death stares to Chalmers on national TV. 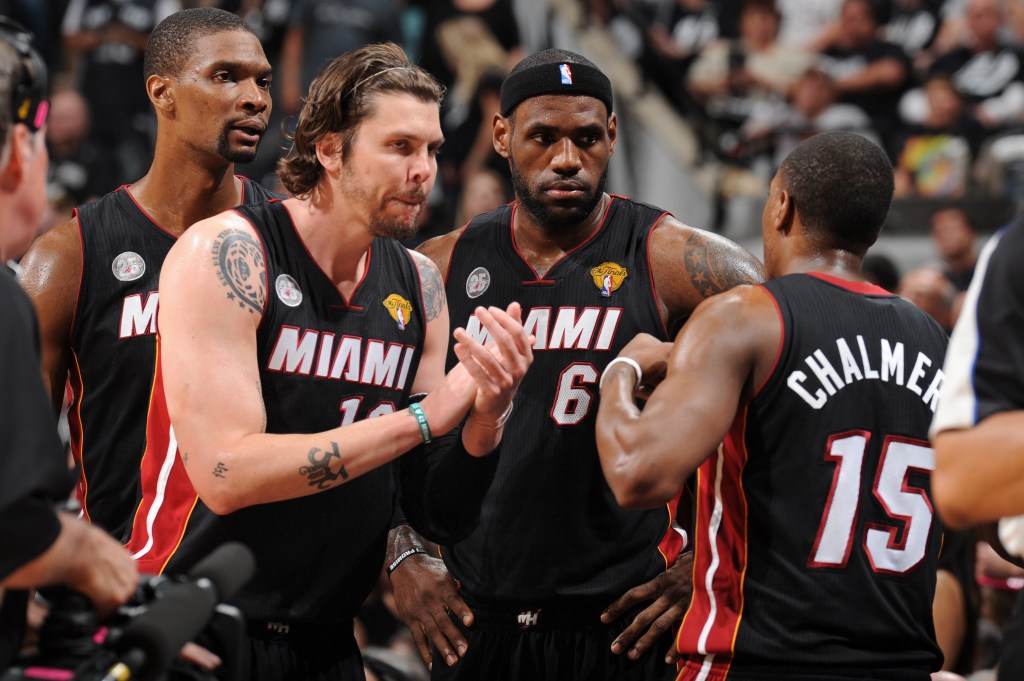 … I’m including it because I went on Wikipedia last night to look at the ’03 draft, and even 12 hours later, I still can’t believe the Knicks took Mike Sweetney in the Top 10.

CHAPTER 9: There Will Be Haters

I don’t think everybody’s going to lose their minds and worry about LeBron and the Heat killing the integrity of sports — we all did that the first time around, and most people have sobered up since then. But people will mock this team relentlessly, because that’s what we do when any team stacks the deck like this.

Then once the games start, we’ll either see underdogs pulling off inspiring upsets, or see one of the greatest offensive teams of all time carve up the NBA. It’s a win-win regardless. And everybody will watch to see which direction it goes on any given night. That’s why this would be good for the NBA. Even the people who hate it will watch so they can root against it.

CHAPTER 10: And Then There Will Be HATERS

OK, so maybe some people will lose their minds and start ranting about LeBron ruining the integrity of sports.

Most of those people will be NBA owners.

It won’t matter that Melo in Miami will spark more interest in the NBA than we’ve had since 2010, or that Melo in Miami definitely doesn’t make the Heat unbeatable. The principle of four players taking less money to completely circumvent the system will horrify other owners, and if it happens, it’ll lead to some kind of dramatic showdown during the CBA talks in 2017.

Owners can’t have it both ways, though. This is what happens when you cap salaries for the best players on earth. Eventually, guys like LeBron can make so much money elsewhere that it’s not actually that crazy to give up $8 million to $10 million of NBA salary to play with his superstar friends. If it’s the difference between $40 million and $10 million per year, that’s one thing. But we’re talking about the difference between $20 million and $10 million. For a guy who made $30 million in one day two weeks ago, giving up $10 million for a chance at a title isn’t actually that crazy. This is the world the owners have created for themselves.

Even if everyone takes less money in Miami, even if Carmelo decides to take a pay cut, even if the Big Three really does turn into the Big Four this summer … it probably won’t end with a title. How many rosters have come together to unleash one of the most dominant seasons ever, and then fall flat somewhere along the way? The Lakers last year, the Heat in 2010, the Lakers in 2004 … it almost never works like it’s supposed to.

Adding Carmelo won’t necessarily be a great fit on the court. The biggest piece of the Heat’s dominance has always started on defense, and if you put Carmelo in the mix along with a hobbling Dwyane Wade, that’s two guys on defense who scare absolutely no one.

Throw in Melo’s ball-stopping tendencies and the challenge of making that work within Miami’s frenetic, pass-first offense, and it gets even more complicated. Miami still needs more depth, and that’s before Ray Allen (probably) retires and Rashard Lewis finally perishes into dust. Wade and Bosh are regressing a little more every year, there would be daily scrutiny of them all, and the East won’t be this bad again.

It’s not to say Miami can’t keep winning with Carmelo, but he’s not a one-man cure for all the factors working against them. There’s a much better chance this would fail.

Because WHY NOT? It could never happen in any other sport.

True, this is why some people hate the NBA, but even those casual fans would tune in to root against the Heat. It would be so much fun to watch it all descend into chaos.

We could credit it all to Dr. Dre, we could watch guys like Dan Gilbert and Ted Leonsis have a seizure watching this wreck competitive balance, we could watch LeBron and Wade assert more control over their sport than we’ve seen from athletes anywhere, we could spend the whole year waiting to see if the Spurs or Thunder or Rockets will just beat them anyway. Michael Jordan would give so many interviews saying he never teamed up with the enemy, eventually he’d just be scolding random people at Charlotte grocery stores.

Good or bad, we’d all be entertained. It would add more drama to the NBA than we’ve had since 2010. That’s why we should root for this.

Will any of it actually materialize in real life? Probably not. There are too many moving pieces. It’s too far-fetched. I know.

But we’re OK either way.

If it happens, we’ll remember the next year forever. If not, I’ll always remember the one day during the NBA Finals when the whole world started fantasizing about Carmelo in Miami. It was stupid. It was ridiculous. It was such a great way to waste time until Game 4.