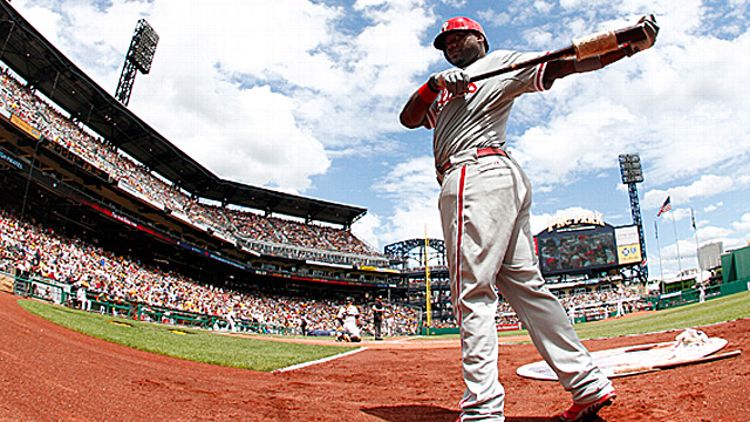 Yesterday, the Phillies put Ryan Howard on the disabled list so that he could undergo surgery to repair the torn meniscus in his left knee. It was the latest agonizing turn in the career of a player who was once one of the best power hitters in the game, but is now hobbling out the last days of his career like a racehorse with a broken leg.

Howard was superb in his early years, winning Rookie of the Year in 2005, then hitting 58 home runs and winning the MVP in 2006. He hit at least 45 home runs in each of the next three seasons and at least 30 the two years after that. Since then, he’s suffered a catastrophic injury to his Achilles tendon and returned a shell of his former self, partially because age robs baseball players not only of speed and health, but of bat speed as well.

Aside from the physical deterioration, Howard has, over the years, seen his production devastated by opposition scouting reports. He can hit a grooved fastball most of the way to Mars, but he sees very few of those anymore. In fact, among players with 1,000 or more plate appearances since 2007, only Miguel Olivo has seen a lower percentage of fastballs than Howard, and Miguel Olivo will swing at anything.

The book on Howard is that you throw him breaking stuff, low and out of the zone, because he’ll always swing and always miss. And anything he does hit is almost always pulled. And he can’t hit lefties at all — in 2009, when he hit 45 home runs and finished third in MVP voting, he still only hit .207/.298/.356 against lefties, a dropoff of more than 400 points of OPS from his numbers against right-handed pitching. As he’s gotten older, it’s only gotten worse: This year, he hit .173/.218/.321 against left-handed pitching, though he still managed an impressive .302/.357/.522 against right-handers.

It’s an easy book to follow: Bring in a lefty, throw Howard slop out of the zone, and shift your defense so far over to the right side that people will think Jean-Marie Le Pen is playing second base. And Howard, like Charlie Brown trying to kick a football, will either miss entirely or hit it into the shift.

The result of all this is that Howard has gradually, inexorably, and painfully become something of a depressing spectacle. And while a broken-down 33-year-old first baseman might ordinarily be the kind of commodity a team in transition — like the Phillies — might try to unload, he carries with him a millstone of a contract that, as SB Nation’s Steven Goldman explains here and Bill Baer of Crashburn Alley explains here, was a mistake when the Phillies offered it to him three years ago.

Howard was brought up and signed as an impact bat, the kind of franchise tentpole that produces runs and wins and championships, and he exists largely in our memory as that. But that’s not what he is anymore. Today, Howard is a platoon DH, still potent against righties but awful against lefties, and entirely bereft of value as a base runner or defender. He’s a player who’s done such great things and deserves to go out with more dignity than he’s going to get.

And the Phillies, an organization that values experience and a lengthy CV as much as any in the sport, aren’t going to remove Howard from the cleanup spot anytime soon. Over the past couple weeks, they’ve been resting him against lefties more and more, for his knee’s sake, but when he’s healthy, Howard hits fourth. Even when Carlos Ruiz slugs .540 in 2012, even when Domonic Brown homers just about every night for two weeks.

So thanks to his contract and his reputation, odds are that we will watch Howard sink even further into his athletic senescence, in the cleanup spot, every night for the next three years. It’s going to be awful, not just because the Phillies are trying to build around a horse with a broken leg, but because we’re going to have to watch it unfold in slow-motion.