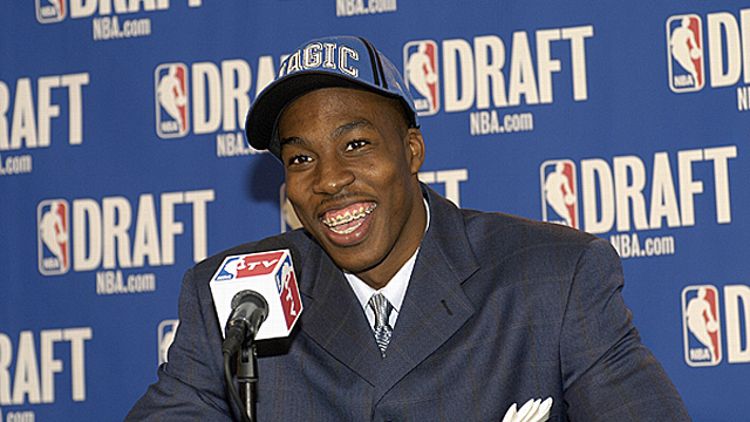 Like any form of entertainment, sports is a manufactured experience. On some level, we process celebrities — athletes included — like our personal avatars, as a way to experience things beyond ourselves. We are interested, of course, in what they do —playing basketball, rebounding, dunking, etc. But we are just as interested in what it’s like to do what they do. What would it be like to dunk on someone? What’s it like to win a championship? What’s it like to be famous at 18? It’s this empathic process that makes Dwight Howard the most interesting superstar in the NBA, because his reactions to the heady details of modern sports fame are so very, very normal.

We imagine that superstar athletes have some kind of rare personality trait that explains their incredible success. Jordan was sociopathically focused; same with Kobe. Garnett displays unnatural, serial killer–like ferocity. Eighteen-year-old LeBron was as polished in interviews as a 10-year pro. Duncan has preternatural stoic calm in the face of pressure. That’s what we want from our superstar athletes; personal qualities more deserving of fame and riches than what we know from our quotidian experiences.

Dwight, on the other hand, behaves exactly how you’d expect a teenager who was handed millions of dollars and worldwide celebrity just out of high school to behave: he’s indecisive, has little-to-no self-awareness, and he desperately wants to be liked. It’s this inability to play into the traditional superstar athlete personality archetypes (Inspirational Drill Sergeant or Stoic Leader By Example) that seems to annoy most NBA traditionalists. How many times have we heard “Dwight smiles too much”?

One of my favorite athlete-produced documents ever is Dwight’s Orlando Magic–era website biography. In addition to giving you some insight into how the 24-year-old Dwight thought of himself, it’s got a little bit of every kind of unintentional comedy you want from a piece of autobiographical writing. A few highlights:

There’s the writing style that reads like it was composed by the Portuguese version of Entertainment 720’s Jean-Ralphio, then Google translated into English.

Orlando Magic center Dwight David Howard Jr. is not just a basketball player. He is one of the most charismatic and thus popular basketball player on earth. His muscular physique resembles a 6’11 bronze statue of Apollo. His resume belies his 24 years of age while reading like the first chapter of a sports monopoly. The home grown Atlanta, Georgian has pillared his brand on ferocious dunks and electric smiles.

There’s the unnecessary shots at Yao Ming, an understandable shot at Shaq, strangely dated spelling of Hakeem Olajuwon’s first name, and the use of the phrase “maximum talent’s proverbial iceberg.”

This is why he’s recently committed himself to a second childhood passion of his: acting. He slipped into the role of Orlando Magic locker room entertainer as effortlessly as he earned his class clown reputation in school.

(The above reminds me of the Roman Emperor Nero who, among many weird fetishes, had a passion for acting. While he performed, no one in the amphitheater was allowed to leave, not even to go to the bathroom. It is said that women faked labor and men feigned death to escape. I wouldn’t be surprised if Rashard Lewis’s positive PED test turned out to be an elaborate ruse to escape Dwight’s effortless entertaining.)

The NBA Hall-of-Fame is inevitable for Dwight Howard. Becoming an icon will be an even richer achievement. He’ll have even greater basketball success—individually (NBA MVP) and collectively (NBA Championship). He’ll achieve this with thunderous dunks, unforeseen grace and an unapologetic smile as bright as his intended home in Hollywood. In the meantime Dwight David Howard is simply the franchise giant of the NBA and superman to children in need.

I picture the younger Dwight, ebullient in matching sweater-vest and bow tie, stroking his chin and sagely nodding as whoever wrote that read it to him. “Yeah, statue of Apollo. I loved it when he fought Rocky to a draw.” Someone on Dwight’s management team read the line “His statistics are as benevolent as his philanthropy” and was, like, “Yes. That makes sense. That is good.”

Now, imagine if it was someone’s job, or multiple peoples jobs, to indulge the whims of your twentysomething-year-old self. I’m guessing you might think you were the funniest person ever, too.

We rip Dwight for the way he handled his tortuous exit from Orlando as a 25-year-old guy negotiating with seasoned businesspeople twice his age who previously had never denied him anything. We love ripping him for being an overgrown kid. We love to rip Dwight for transforming from a sanctified bible thumper to a groupie monger. But how many of us are the thing we thought we were at 18? And that’s without microwaved, instant fame and mountains of cash.

For most people, personal maturation comes when adolescent dreams butt up against real-world economic realities. It comes with the existential dread of working a crappy job with no road map to the next, slightly less crappy job, hopefully with a benefits package. Being a musician is cool and sleeping with lots of chicks is cool, but you know what’s really cool? Not having to borrow someone else’s asthma inhalers because you don’t have health insurance. Dwight will never feel that kind of pressure. He is rich beyond our imagining from his ability to play a game, and his worldview is shaped by the fact that people have been recruiting him since before he could legally drive. What’s weird to me is that more athletes don’t end up acting like Dwight.