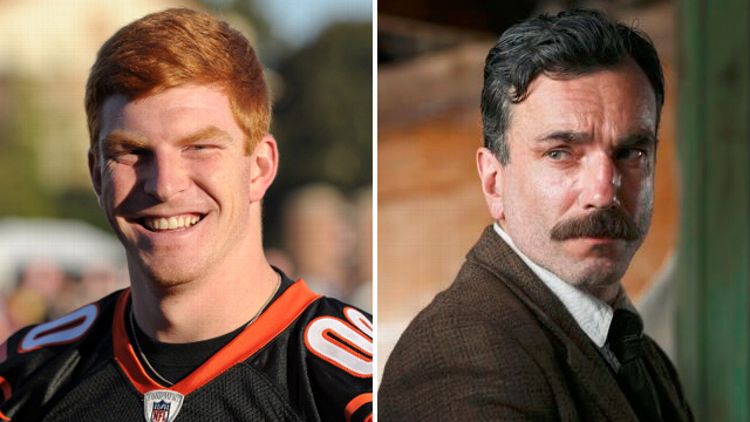 I finally got cable installed in my basement office, just in time to watch the Bengals collapse in the first round of the playoffs for the third consecutive year. 27-10, Chargers win. It was a pleasure to watch this happen in the comfort of my home, and that’s the main thing I have to say about it. Play of the game: Phil Simms ascribing the Bengals’ mounting difficulties to “the lack of Christmas — crispness by their offense.” You can keep “elite” and “momentum”; my new favorite meaningless football word is “crispness.”

“It was basically entirely his fault,” he said. “He was 90 percent responsible for them losing the game.”

I said something noncommittal about how the whole offense seemed to have gone aphasic and vapor-locked after the second quarter; Hertz shook his head again. “No,” he said. “There are 46 players on the team and nobody did more than he did to lose that game.”

Someone had asked me if I was mad at Andy Dalton; that’s how the conversation started. The truth is I wasn’t. I’ve been working on letting go of anger. I’m becoming convinced that Dalton and his most unwavering advocate, Marvin Lewis, were put on this planet to teach me to do that.

We were driving back to Los Angeles from seeing my parents up north, my wife and my daughter and I. I was driving a rented white hybrid car. I don’t want to say what kind of car it was. But I’d fallen in love with its smooth acceleration, its ample headroom. Normally I drive another kind of hybrid that’s not as good. For discussion’s sake let’s call it a 2013 “Reince Priebus.” When I turned in the rental car and started driving the Priebus again it felt like I was driving one of those ’80s tape dispensers, the kind with a load of sand in the base for ballast.

To break up the trip we’d booked a night at the Madonna Inn, a holy site of American kitsch just off the highway in San Luis Obispo. Built in the late ’50s, reimagined after a fire in the late ’60s consumed most of the original rooms, it’s the grooviest unreal place you’ll ever visit, like a Disney-blueprinted Swiss chalet that’s been dosed with a mild psychedelic, Hearst Castle in baroque drag, or a Winchester Mystery House built to bind the ghosts of Batman villains. No two rooms are alike, and each one has a name and a theme, like at Graceland; our suite was called “Barrel of Fun.” It had gold lamé wallpaper, a fiber-optic Christmas tree, and a giant stone fireplace that looked like something Fred Flintstone might marvel at while visiting the prehistoric Palm Springs abode of Frank Sinatrock.

We’d all been cooped up together too long. We were tired from the road. Still, after dinner my daughter and I danced on the carpet to “Feliz Navidad,” which is her favorite song to twirl around to right now that isn’t “Drunk in Love.” (Long story.) She’s 3, and sometimes when we’re doing stupid stuff like this, I feel like Selena Gomez in the pool in Spring Breakers, longing to freeze a moment forever. But the other thing about having a 3-year-old is that shit can go sideways before you even realize what’s happening.

We thought we’d put her to bed. If you want to hear God laugh, make plans to put a 3-year-old to bed in a hotel room where there are other people still awake. We were going to sit by the fire, maybe order up some cocktails from downstairs. And God said LOL. The kid wouldn’t sleep, wouldn’t even entertain the idea. Not by herself on the room’s one big bed, not with my wife and me lying on either side of her on said bed, and not later, when I’d exiled myself to the sofa, out of her line of sight. My wife stayed behind, soothing and shushing and admonishing, to no avail.

Was it my daughter’s fault that she couldn’t slip calmly into dreamland in this weird gold lamé room with its hellmouth hearth? A room undoubtedly haunted by the psychic footprints of decades of pink-drink-drunk honeymooners? In a hotel immortalized by Umberto Eco in his great essay “Travels in Hyperreality”? Thinking about it now, I can’t blame her for being a little restless. But that night, after maybe four hours of fruitless sleep-negotiation, I lost it. I got up from the couch and stomped over to the other side of the room, where the bed was. We’d brought a folding cot with us from L.A., which my daughter had refused to sleep on because it wasn’t a big-girl bed; I started setting it up.

“This is ridiculous,” I said to my wife. “She’s never going to go to sleep if she’s in bed with you.” Or that’s what I’d like to think I said, anyway; there were probably more curse words involved. Either way: My wife decided I was overreacting, and suddenly we were fighting. “What are you doing?” she asked me, angrily, because she’d created some fragile peace that I was now disturbing with my stomping and cot-finding. Then my daughter asked me what I was doing, and my wife told her not to worry. “Daddy’s just having a fit,” she said, which infuriated me for real, because she’d somehow managed to both overstate and trivialize what was going on.

It was one of those small creative-differences fights you have when you’re the co-parent of a kid who occasionally behaves like an unreasonable asshole. It lasted 30 seconds. I put the cot down and went back to the couch. Soon my daughter passed out and so did my wife. But even though all I’d wanted to do all night was sleep, I sat awake for hours, feeling wronged.

I do this sometimes; I stay up even when I don’t have to, even when my body would prefer not to. There’s some specific flavor of aloneness I can only taste when I’m the only one left awake in a house full of sleeping people. I need it and I get cranky when I don’t get it.

Except normally when I’m alone like that, I’ve got my TV and my Internet and my records and what I believe to be the best-curated collection of unread books on the east side of Los Angeles. That night in the Barrel-of-Fun room, though, I had a dead phone and half a bottle of room-temperature water. All the books I’d brought with me were out in the car, and I didn’t want to risk opening the door and letting the night air in, because if the night air woke my daughter up I was pretty sure I’d get murdered and divorced. So I was alone with my thoughts in a way I don’t generally like to be.

It was good; I had epiphanies. I become a real epiphany-having dude around this time of year. I stared into the gas fire, which was a real enough fire as long as it was burning, but ceased to be a fire the minute you flipped a switch. Why had I stayed mad? Me being vocally and visibly pissed off didn’t help the situation in any way, nor did my being pissed off at my wife for getting pissed off at me. But I’d chosen to be upset. I’d decided to keep feeling wronged. For hours. In a few years I’d be 40. And here I was. Sitting up in the Barrel of Fun Room being angry for an audience of no one.

Here, from 2009, is art critic Dave Hickey giving a lecture called “The God Ennui” to arts-criticism MFA students at the School of Visual Arts in New York. The talk is mostly about patronage as it relates to art, but I like what he says at the beginning, when he wonders why artists and writers aim to sow upsetness and confusion and excitement rather than making people feel content. He cites the writer Morse Peckham, who took up the same question in a book called Man’s Rage for Chaos: Biology, Behavior and the Arts.

“It was Peckham’s idea,” Hickey says, “that even though human beings and individual human beings and cities and countries and towns strive for contentment, the species demands that there be somebody there to deal with things when it gets weird. When it all goes weird, somebody’s gotta jump on the hand grenade. Somebody’s gotta say, Oh, there’s a tiger out there. Somebody has to confront threats to the species. And since we are certainly the safest species in the world, we developed disjunctive and subliminal ways of doing it. In other words, we developed rhyme so we can feel anxious when it’s not there. We develop meter so we can feel the anxiety of its collapse. We develop rules of art so we can feel nervous when they are not followed. And the reason we invent these synthetic situations is because eventually somebody has to go out of the cave and deal with the tiger. So that art and music and literature become a way of teaching us to deal with discontinuity and anxiety and ecstasy and all of those things that fall into the ‘not-content’ category.”

I found this fascinating. I wrote it down when I first heard it and I’ve tried to squeeze it into more than one of these columns in the ensuing months, both because I like it and because it seems to speak to the only real question these columns have ever raised, which is the question of why I chose to stick with an upsetting football team that loses all the time, why I would voluntarily leave the embrace of my family every Sunday morning to watch this happen.

Hickey was obviously not talking about the NFL. I don’t know if Hickey follows pro football, although he makes some assertions about the zone defense in basketball in his book Air Guitar that I’m told are quite controversial. But my Peckham-via-Hickey-via-me hypothesis is that football is a synthetic way of experiencing loss and frustration and disappointment. A safe space to feel what it feels like to feel those things without it actually mattering.

I sat awake by the fire and realized my emotions didn’t really exist. They were just something my brain happened to be doing at that moment. Brain-weather. I was the one deciding to let them consume me. And I should have known that, because watching bad Bengals football taught me that lesson over and over. I felt frustration, anger, disappointment — and then I could stop feeling it, because it was just a TV show, and whether Dalton threw three interceptions or 300 changed nothing about my life outside Ye Rustic.

Days later, watching the end of Dalton’s lonely war on crispness, there were some moments, I won’t lie, when I felt the pull of the narrative again. I got nervous; I got excited. I stress-organized a closet. But mostly I felt nothing and therefore I felt free. When it was over I gave thanks to the God Ennui, and then walked upstairs to be with my family again.

We Went There: The High Drama of the U.S. Figure Skating Championships