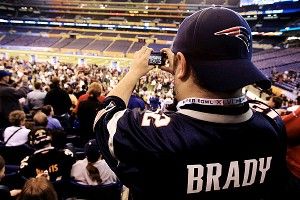 Everybody has their faults. Some people are kleptomaniacs. Some people walk onto uncrowded subways and stop directly in front of the doors. There are even some who use nail-polish remover during cross-country flights. And some people (hi there) cheer for the Patriots despite having no good reason to do so. My name is Chris Ryan. This is my confession.

Yeah, that whole Pats thing. My bad. I’m not from New England; Steve Grogan was a hero to most (in, like, Waltham) but he never meant shit to me. So why will I be pulling for the Brady bunch on Sunday?

Because I am a compulsive cheerer. While some guys like to gamble to heighten their interest in the outcome of a sporting event, I like to establish a rooting interest. It’s annoying and I’ve almost been suplexed by some of my best friends for coming over to their houses and cheering for the wrong team, but it is what it is, and what it is is my cross to bear.

Now, there’s one big reason I’m going to be pulling for the Pats on Sunday: Because I am a hater. I’ve lived in this wonderful, exciting town for 10 years, but I still wish nothing but utter misery and ruin on New York’s sports franchises. You can take the boy out of Philadelphia, but you can’t take the sore-losing, Giants-hating jerk out of the boy.

But man cannot live on hate alone. You need some yin for that yang. You’ve got to find some reason to get behind a team, because simply wishing ill on another franchise will eventually give you indigestion (medical fact).

This begs the question: “How can you cheer for a team as unlovable as the Patriots?” My answer — which is going to sound a lot like the part of the Kobe System where he just goes, “You’re welcome” — is this: EXACTLY.

I like the Patriots because they are unlikable. Sure, there’s something onerous about the Nixonian way they handle themselves — the ice grilling of the media, the spy cams, the slush funds (one of those may not be true). But what’s sillier — Bill Belichick treating his football team like some 1980s Eastern Bloc country, or the way we get so worked up about it? For the love of Tom Landry. It’s just football.

Speaking of Toms: I find Brady delightful. He is married to a beautiful woman, wears comfortable shoes and is fucking INSAAANE. Seeing him wild out in the Pittsburgh end zone, taunt the Jets, incinerate Tebowmania (which you know he did on purpose) and start a brawl by quick-punting, cry about being drafted in the 6th round, or get screamed on by Bill O’Brien is hilarious to me.

Then there are more subtle, equally charming qualities: The fact that BenJarvus Green-Ellis may (or may not) be Birdman’s nephew, Aaron Hernandez’s “Make It Rain” touchdown celebration, the mere thought of Vince Wilfork dunking, and Rob Gronkowski’s stunning grasp of the Spanish language.

I’ve gotta cheer for somebody. Like, really, I really have to. Why not these guys?

Draw It Up: Giants' Counter Scheme