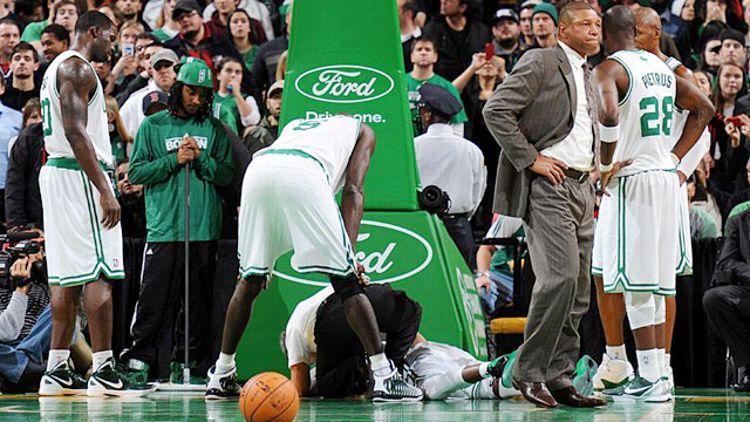 It’s Wednesday night in Boston, and Toronto has just unraveled, falling 100-64 to the Celtics. It’s a laugher of a victory, but also a best-case-scenario kind of win and Doc Rivers will take it. The lockout-shortened season is particularly threatening to a veteran roster, and Rivers must walk the tightrope between rest and Ws, development and improvement.

With the Celtics’ “Big Three” — Kevin Garnett, Paul Pierce, and Ray Allen — playing for just over an hour in combined minutes against Toronto, bringing the intensity early and getting a breather for much of the second half, the win was something of a mediocre milestone. They finally topped the right side of the ledger and improved to 11-10. “It’s good really. We’ve been through a lot,” Rivers said. “So has everyone else in the league. It’s not just us. To start out slow like we did and get over that number — it’s good for us.”

Boston had a tumultuous start to its season. Late last year, Rajon Rondo, who is both surly and special, was rumored to have been offered to New Orleans for Chris Paul. Then, in December, the organization learned forward Jeff Green would miss the entire season. (Green, who was sent to Boston last year in the Kendrick Perkins trade, had been diagnosed with an aortic aneurysm.) As the season began, Pierce sat out Boston’s first three games (all losses) with a bruised heel. And the injuries kept coming. Rondo sprained his right wrist last month. He has missed the past eight games.

“Things are starting to come around,” Pierce said. “We really gained some confidence over the last few weeks and hopefully we’re going to continue to get better. It’s just about putting together some consistency with this ball club, ’cause earlier in the year, we were losing to a lot of the bad teams we shouldn’t lose to, especially on our home floor. So I think we’re just starting to play better and be more consistent in what we do, and hopefully that continues and we get guys off injury and we continue to play and do better.”

Pierce will not tie the team’s improvement to Danny Ainge’s pledge that he would consider breaking up its core by trading Pierce, Allen, or Garnett. In January, Ainge told the Boston Globe that he remembered how Red Auerbach had a chance to break up a decaying dynasty of Larry Bird, Kevin McHale, and Robert Parish. Ainge, then a player, wondered why Auerbach did not opt for the trades, and said the same would not happen to these Celtics.

“It’s almost like Mitt Romney answering the question about how much taxes he pays,” Ainge said in an interview on Boston sports radio station WEEI. “He says 15 percent in capital gains. And it becomes a huge story when he’s only stating the obvious. Some people don’t know the obvious. … That’s how I feel with this. It’s obvious. They’re obvious things. Of course if we get the opportunity to make a trade that will help our team we’ll do it.”

When Ainge spoke to WEEI, the Celtics were 5-8. They would drop another game before righting the ship.

The Celtics, who face the Knicks tonight, have reeled off six wins in their last seven games and would be undefeated in that stretch without the play of Kyrie Irving in an 88-87 loss to Cleveland. The victories included two wins over Orlando, both demoralizing to the Magic in separate ways. In the first, Boston humiliated Orlando and Dwight Howard, 87-56. In the second, the Celts rallied from a 27-point deficit to come back, prompting Garnett’s “bar fight” interview with Craig Sager.

In Rondo’s absence, the Celtics are receiving solid guard play from the unheralded duo of Avery Bradley and E’Twaun Moore. The pair is surpassing expectations to the point that Rivers was asked how he would find playing time for everyone.

“We’ll just figure it out,” Rivers said. Then he deadpanned: “I’m pretty sure I’m going to start Rondo. I’m positive of that, as a matter of fact.”

Ainge, of course, has to look further down the road. Should he play for the present or plan for the future? It’s a decision he’ll have to make at the trade deadline. But when when he does, he might look to the Spurs as an example. San Antonio has kept its core intact. They have played well in the regular season. But they haven’t threatened as a serious title contender for some time. Pierce and Allen are at least giving Ainge reason to pause.